Ben Maher Is in an Empire State of Mind 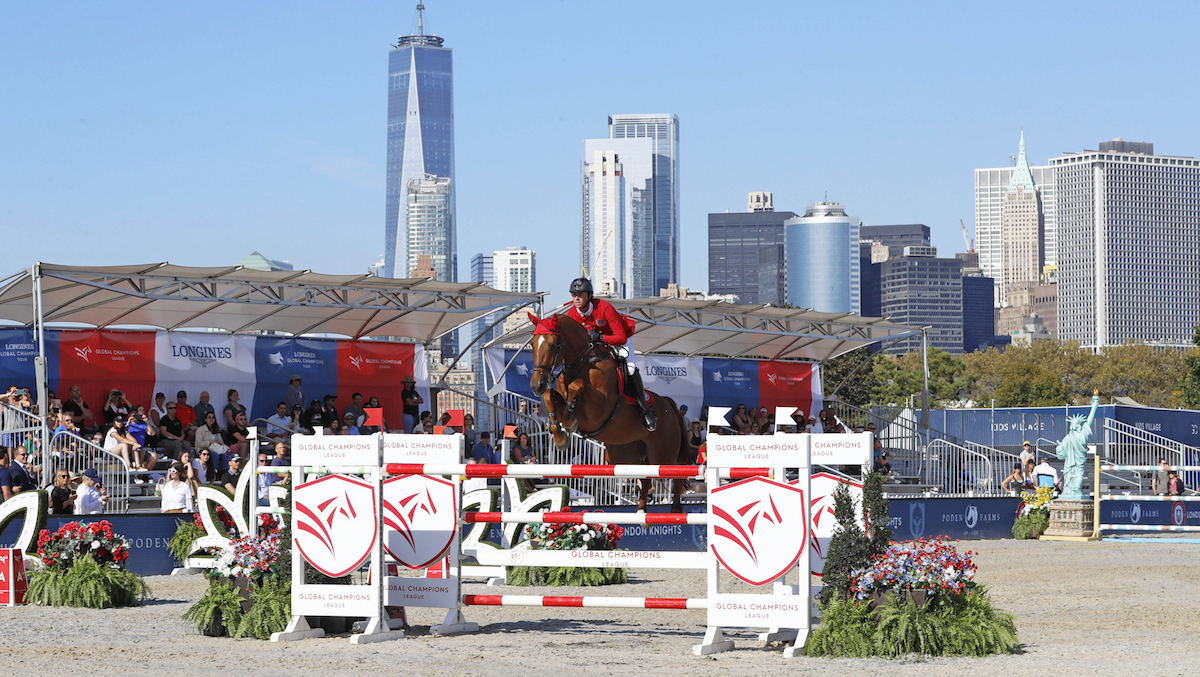 The concrete jungle is where Ben Maher’s (GBR) dreams are made of this weekend.

The British import won all the things this Saturday at the Longines Global Champions Tour (GCT) & League (GCL) New York on Governors Island.

Let’s review his phenomenal two days, with a little help from Alicia Keys.

On Friday, Maher and Explosion topped Round I of the 1.50/1.55m GCL Team Competition with a blistering speed round, crossing the timers in 64.49 seconds.

For context, runners up Daniel Bluman (ISR) and Ladriano Z were more than half a second off their time (65.19), while third place finishers Francois Mathy Jr (BEL) and Uno de la Roque trailed by more than FOUR FULL SECONDS in 68.83.

In Saturday’s GCL Round II 1.55m class, the heroic pair sealed victory with two more faultless rounds to take both the win in New York and the 2019 Championship title. For the second year in a row.

“Coming into this event there was a lot of pressure so we said we’d bring our two best horses, we knew had to win [to have a chance at the title] so it’s what we came for,” said Maher.

Fuchs agreed: “It was a big goal for us—it wasn’t as easy as last year, but this year was a very, very exciting last show.”

[Editorial aside: Fuchs just used easy and GCL in the same sentence. Cute.]

These streets will make you feel brand new

Going into Saturday’s GCT Grand Prix of New York, Maher was in a dead heat with Pieter Devos (BEL) on the 2019 individual leaderboard, with just a single point separating them (277 and 278, respectively). Again, the Brit brought out his top gun, Explosion, for the task.

What followed was an epic battle to the end.

Both riders qualified for the seven horse jump off in the 300,000 Euro LGCT Grand Prix. Devos, third to return for the short track, set out pedal to the medal, but an unfortunate run out in the double with Claire Z left the door wide open.

Maher and Explosion blew through it with yet another double clear, stopping the clock in 34.08 seconds. The Olympic gold medalist jumped to 301 points on the individual ranking, while Devos slipped into second with 283 points.

“I feel bad for [Fuchs],” said Maher. ‘He gave a great fight. He’s really pushed us all the way to the end.”

Explosion, it should noted, has only incurred two rails in his past 16 international performances—all 5* or Championship classes. He’ll be the horse to beat at the Prague Final.

Big lights will inspire you

With just one combination still to come in the Grand Prix, Maher’s London Knight’s teammates Fuchs and The Sinner were all that stood between him and clean sweep of Saturday’s schedule. The pair gave chase with a double clear but fell short of Maher and Explosion’s time, crossing the timers in 34.95 seconds. It was good enough for third.

Marcus Ehning (GER) and Cornado NRW took second in the Grand Prix of New York with a double clear in 34.65 seconds and booked their ticket to the Prague Final as the top finishing rider not yet qualified.

“I knew it was going to be a tough weekend this weekend. The dream was to win the team and the individual, obviously. This doesn’t happen very often,” said Maher. “So what a horse. He’s incredible and I’m very lucky to ride him.”

What he meant to say, we have to assume, is that it doesn’t happen very often to other people. For Maher, it’s his second year in a row taking both the team and individual GC titles. He’s won an astounding 1,021,464 Euro in prize money during the 2019 GCT/L season, which is 10k less than he won last season.

Maher is currently ranked fifth in the world. Right this minute though, he’s got to be feeling like #1.