And the Canadian Crowd Goes Wild! 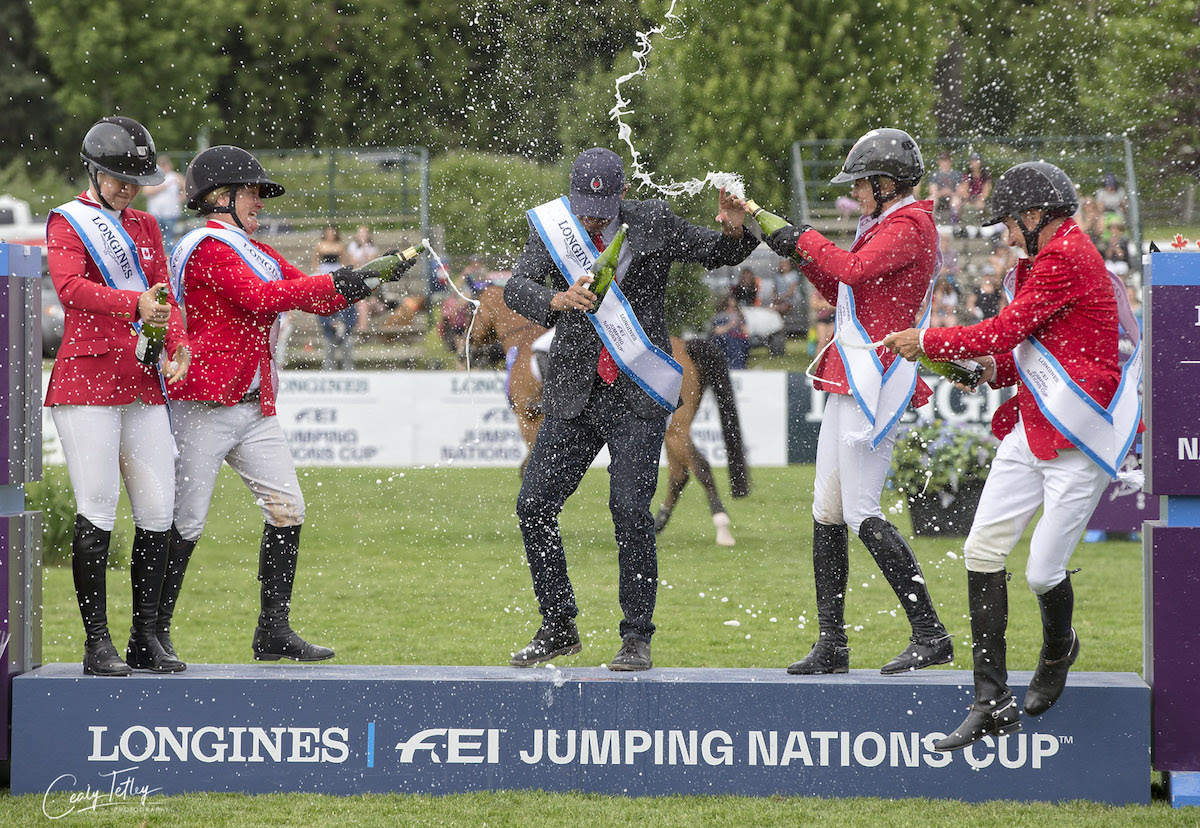 Whether or not a “hometown advantage” is fact or fiction is a longstanding debate in the realm of sports.

While this is Horse Network and not Myth Busters, there is no denying that winning at Thunderbird Show Park was special for Team Canada.

Waving the maple leaf to the tune of O Canada, the home crowd cheered them to victory in the $400,000 CSIO5* Longines FEI Jumping Nations Cup™ of Canada Sunday afternoon. The support proved to be a source of motivation for the Team Canada athletes Lisa Carlsen, Nicole Walker, Tiffany Foster, and Mario Deslauriers. They took their first tbird Nations Cup victory with a team score of 4.

“Of course there’s pressure,” said Nicole Walker, “We all felt a lot of fans here cheering for us, and other people are relying on you, [but] you also can take it in positive way. We come together as a team, and you can become better in the second round. I’m enjoying the pressure. It’s good for me.”

Leading by two rails as Foster, the third rider in rotation, entered the ring, Canada needed a 7-fault performance or better to secure the victory and save anchor, Mario Deslauriers and Bardolina, from jumping a second round. With 9-year-old Figor and Mario Deslauriers in her head, Foster did just that.

It was a sentimental win for the hometown rider.

“I grew up here, literally, as a working student,” said Foster, “For us to come back, do a good job and put on a good show [means a lot]. [My teammates] today did an amazing job. It’s just a dream come true to win the Nations Cup here.”

For Lisa Carlsen it was all about timing for both her and her horse Parette. Carlsen said, “As a young kid, I was on the [national] team. I took some time off, and I had a kid. When I got Parette, I thought I’d try to take a shot again.

“She had a lot of potential [when I first got her], but she was very difficult. I took my time developing her, and now she’s starting to peak.”

The result was what Canadian Chef d’Equipe Mark Laskin aptly described as bittersweet. In order to qualify for the final in Barcelona they needed a win and for the Americans to finish fifth. However, the United States came in third with a score of 12 behind Ireland, who finished on an 8-fault score.

“It’s great to win [today] especially on home field, but there were two parts to the equation. The first part, we took care of. The second part, we just missed,” Laskin said.

Even so it’s the end of the 2019 Nations Cup tour for Team Canada, there was no better place for them to finish on the top of the podium.