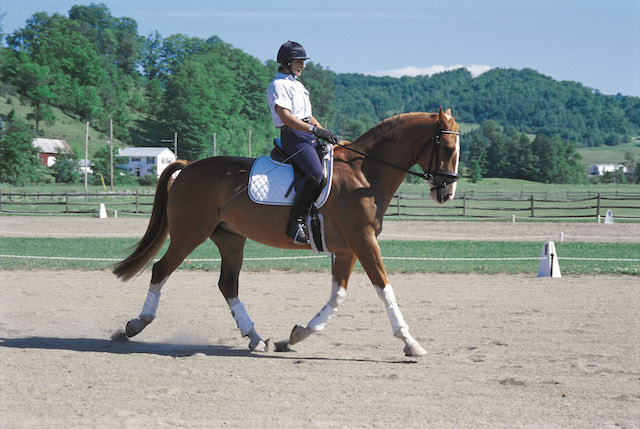 So often, whatever riding discipline we favor, we are looking for that “missing piece” or “secret ingredient” that will help our horses go better, be more willing, stay sounder, longer. From early in her career, popular riding coach and motivational speaker Jane Savoie espoused the importance of basic dressage work for all horses, for all these reasons. In this excerpt from her bestselling Dressage 101, Savoie explains why it’s worth circling at C.

By first connecting your horse—also known as putting him “on the bit” and later collecting him—that is, asking him to carry himself by shifting his center of gravity more toward his hind legs—you can help him become more of an athlete. Learning to connect your horse is desirable because it makes your horse more physically comfortable (and more comfortable for you to sit on!), as well as better able to do many of the things you’ll want to do with him. Plus, connection is a prerequisite if you want to go on to the ultimate athletic goal of collecting your horse.

Collection, or self-carriage, is the icing on the cake. Not only does it allow you to prolong the useful life of your horse by transferring some of his weight off his front legs, but it also makes him more maneuverable, athletic, and easier to ride.

Before I get ahead of myself with this talk about collection, let’s first take a look at connection.

Think of connection as the concept of the horse’s back being the “bridge” between his hind legs and his front legs. The horse’s power, his “engine,” is in the hindquarters. You need to connect him over his back so that the energy can travel from the hind legs, over the back, through his neck, into the rider’s hands, and then be recycled back to the hind legs.

We dressage riders call this connection phenomenon “on the bit.” You might also hear connection being described as “throughness,” “roundness,” “packaged,” “over the back,” “round outline, shape, or frame,” or “moving from the hind legs into the hands.” These are phrases that sometimes create a lot of confusion. (To add to the mix-up, we also have all sorts of ways to describe a horse who isn’t connected such as “disconnected,” “hollow,” “in two parts,” “dropping his back,” or “off the bit.”) 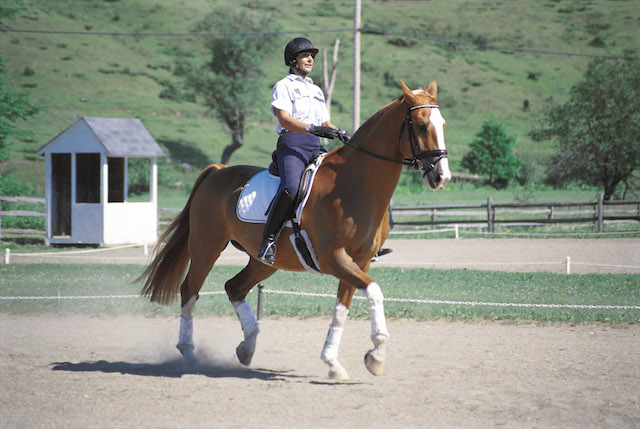 The horse is not connected. His hind legs are lazy, his back is low and hollow, his neck is high, and he is pulling against the hand. Photo by Rhett Savoie.

Basically, a horse’s frame, (which is the outline or silhouette of his body,) is described as round when his hind legs step well under his body so that his back is raised and looks convex rather than dropped and concave, his neck is long and arched, and he stretches toward the contact. The top of his body resembles the curve of a bow when it is tightly strung.

All riders should strive to build a better equine athlete. It’s a fact that “use makes the muscle,” and the horse that’s connected or on the bit will develop a rounded, muscular, and therefore, beautiful “topline.” The horse that carries himself with a stiff, hollow back and an upside-down neck will develop the muscles under the neck and the “bottom line.” At best, this can lead to the horse moving with choppy, short strides that are uncomfortable for both horse and rider. At worst, the horse’s back becomes weak and eventually painful.

As I said earlier, collection is the icing on the cake. Only when a horse is in self-carriage is he able to dance. As Sally Swift said in her wonderful book Centered Riding, “When the horse has self-carriage, with each stride he reaches the hind leg well under his belly, giving the body increased support, thus lightening the whole forehand and lending liveliness and gaiety to his appearance and movements.”

The difficulty in achieving self-carriage is that by nature a horse’s center of gravity is more toward his front legs. But when a rider starts to collect a horse, she shifts his center of gravity more toward the hindquarters. The horse does this through engagement—bending and flexing the joints of the hind legs. This flexing and closing of the joints causes the hindquarters to lower and a corresponding elevation and lightening of weight on the forehand. When the horse is correctly collected, you’ll notice that a comparison of the relative height of the horse’s withers to the croup shows that the withers look higher.

Collection helps the endurance horse to lighten his forehand so there are fewer front-end injuries caused by pounding along the miles; it helps the jumper to turn handily and to rock back on his hocks so he can propel himself over fences; it enables the dressage horse to become more beautiful and expressive in his movement; and lets the pleasure horse carry himself so that the contact with the rider’s hand is light and pleasant. 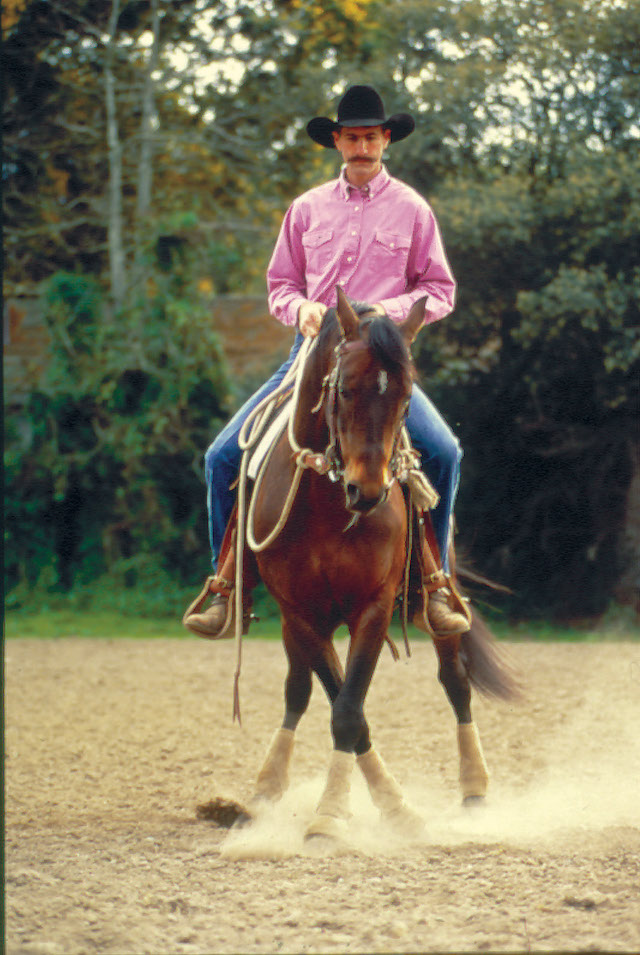 A fluid and soft leg-yield. The horse is round, light, and easy to guide. Photo by John Carlson.

This last benefit reminds me of a rider I met at one of my teaching clinics. This girl was obviously not a dressage rider so I asked her why she was there. She explained that her horse was so heavy on the forehand that riding him made her arms and back sore. He really wasn’t much of a pleasure to take out on a ride. So we discussed the idea of self-carriage as a long-range goal. And, in order to reach it, we decided on exercises and short-term goals that would head her horse on that path. She left the clinic armed with exercises to help her balance her horse and with full knowledge that it would take time to develop the strength of his hindquarters. Since the horse wasn’t used to carrying weight behind, the muscles would have to be built up very gradually. She needed to understand that to demand immediate results would be like expecting herself to do 500 deep knee bends while carrying 150 pounds on her back. By the time she reached 75 (or even 25!), her muscles would be screaming, and she’d be unable to do even one more.

I saw this girl and her horse a year later. She had done her homework, and her horse had been transformed. Through her diligence and patience, her partner was now light in her hands and truly fun to ride. 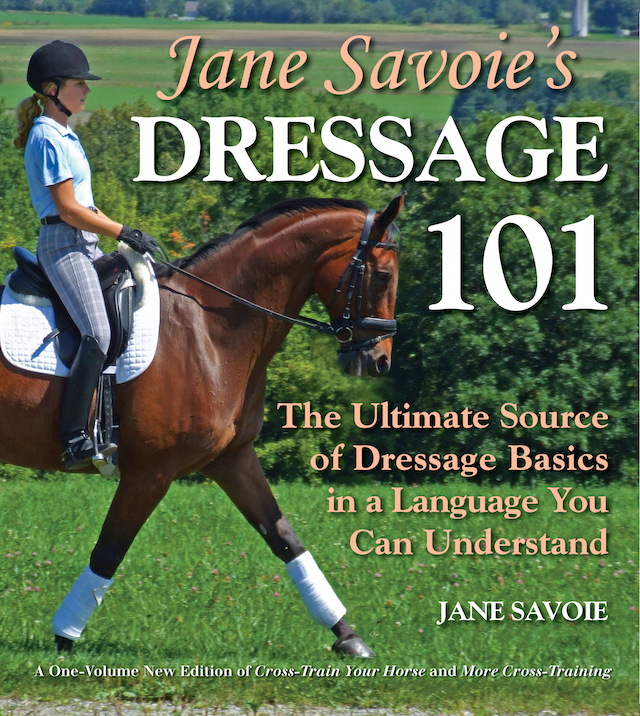 This excerpt from Jane Savoie’s Dressage 101 is reprinted with permission from Trafalgar Square Books (www.horseandriderbooks.com).