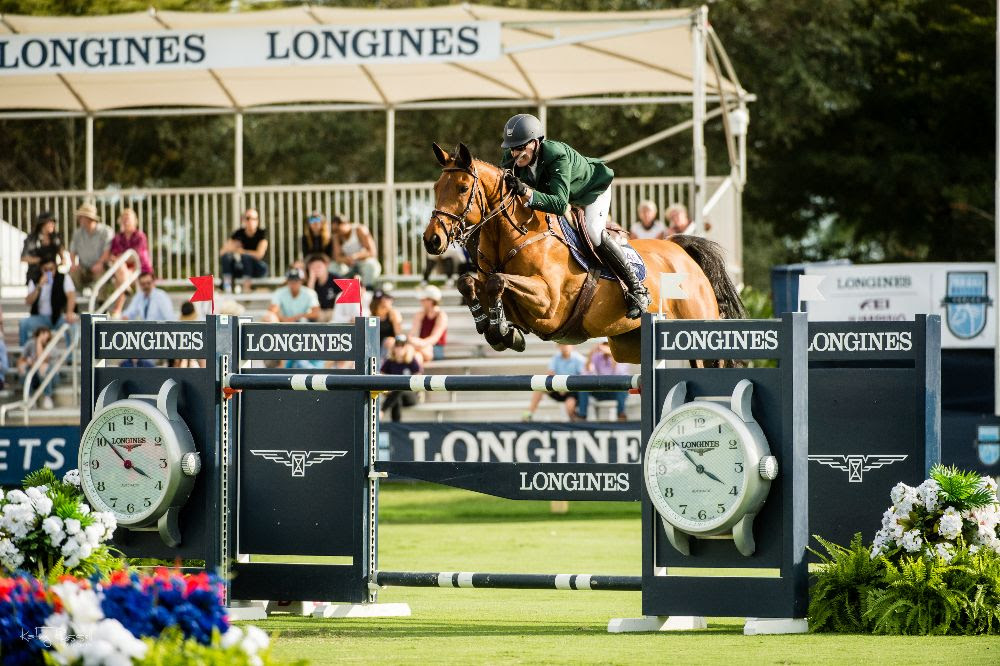 Ireland’s Paul O’Shea belongs to the latter camp, a fact that became apparent after the biggest win of his career on Friday, February 15th in the $210,000 Longines Grand Prix during the second week of the Palm Beach Masters Series at Deeridge Farm in Wellington, FL.

Riding the 11-year-old Belgian gelding Imerald van’t Voorhof, O’Shea was one of only three riders in a field of 44 to unlock the key to Alan Wade’s first round course and make it through to the jump-off. There, the Irish rider made use of Imerald’s tremendous speed across the ground to keep U.S.A.’s Margie Goldstein-Engle and Royce at bay on a time of 36.03 to 36.78 seconds.

In a competition that tight, every tenth of a second counts and, O’Shea says, a horse’s rideability can often provide that winning edge.

“I’ve had a lot of help from a lot of people over the years—really great people,” he says.

Most recently his “people” have been trainer Henri Prudent, dressage coach Jane Savoie, and dressage rider Ruth Hogan-Poulsen. In 2018, O’Shea concentrated his efforts specifically on his horses’ flatwork.

“Ruth comes and she can ride the horses, and she gets them going a little better, and I can get the feeling of what that’s like,” explains O’Shea.

“Jane is the same. It’s all very soft and easy—there’s never a fight, the horses just seem to do what we want them to do. It’s not a big deal, you know? [Jane] has, like, five solutions to every problem, and they’re all nice solutions.”

Still, the Irishman adds, his decision to start working with Savoie was less a case of careful planning than it was a stroke of good fortune.

“With Jane, I had a book of hers, like, 20 years ago [in Ireland]—I think it was called That Winning Feeling! When I moved over [to the USA], I was told to look up somebody [to help with my flatwork], and the only dressage person I’d heard of was her!”

During the last two years, O’Shea says his own riding has also improved greatly under the tutelage of Henri Prudent.

“With Henri, everything is very simple, which suits me, because I can make things too complicated. [It all] just feels very easy and natural, and I like that about him.”

O’Shea adds that Prudent’s ability to figure out what each individual horse in his program needs is his special gift—that, and his go-with-the-flow mentality. “[Henri] is always very upbeat and positive. If I make a mistake, it’s never a big deal. It’s like, ‘Well, we’ll work on this and we’ll make it better the next time.’ I think that’s the best way to move ahead.”

If this week’s result is any indication, he’s heading in the right direction.