Your 2018 Equestrian of the Year Nominees Are…

Time to get your vote on!

US Equestrian has announced the nominees for its annual Equestrian of the Year award/brilliant email acquisition strategy.

For the past seven years, show jumpers have had a stronghold on the prestigious award with wonder woman Beezie Madden claiming it four times and World Cup champions McLain Ward and Rich Fellers logging a win apiece. This year, history looks ripe to repeat itself with two show jumpers making the list—Victoria Colvin and Ward (again).

Here’s the full list for your consideration, courtesy of US Equestrian: 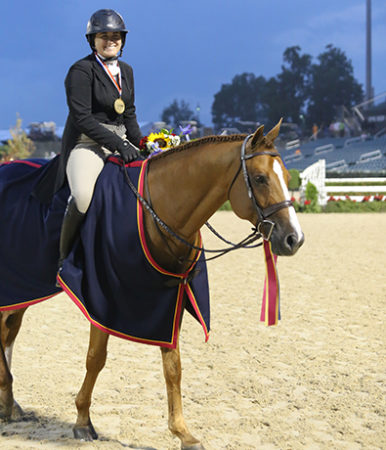 Victoria Colvin, known as Tori, began her accomplished equestrian career riding and showing ponies at a very young age. Her countless titles in junior hunter and equitation competitions helped to launch her highly successful junior career into her own hunter/jumper enterprise. In 2018, she earned the Winter Equestrian Festival Overall Hunter Rider circuit championship and in August made history as only the second rider ever to win the United States Hunter Jumper Association International Hunter Derby Championship more than once when she defended her title with 2018 USEF National Horse of Honor Private Practice. Other accolades this year included the $25,000 Hermès U25 Grand Prix Team Event, where Colvin was the only rider to go double-clear, and she later won the $25,000 CP National Grand Prix.

Colvin first made an impression at the USEF Pony Finals as a junior rider, winning numerous championships over the years and continuing her childhood success with a record-breaking five Best Child Rider titles at the prestigious Devon Horse Show and Country Fair. Colvin also dominated the equitation ring, claiming titles in the 2012 and 2014 Annual George H. Morris Excellence in Equitation Championships, the 2014 ASPCA Maclay Finals, and the 2014 USHJA Hunterdon Cup Equitation Classic. In 2015, she earned the gold medal at the Platinum Performance/USEF Show Jumping Talent Search Finals—East and captured the 2015 Washington International Horse Show Equitation Finals. Colvin is currently competing Zambia Mystic Rose at the grand prix level. 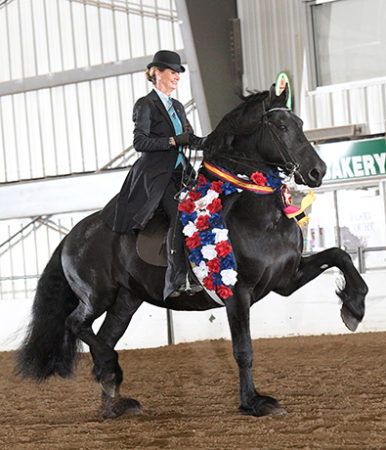 Victoria Gillenwater owns Scenic View Farm in Knoxville, Tenn., renowned for its breeding and training of world champion Friesian, American Saddlebred, and Hackney horses. The farm was founded by Gillenwater and her parents, Paul and Dorothy Gillenwater, in 1980 and has been under her leadership for the past 18 years. Since Gillenwater took the reins, virtually every horse at Scenic View Farm has been raised, many bred, owned, and shown by her or her long-time trainer, Jacques Van Niekerk.

Well versed in an array of disciplines, Gillenwater is a particularly accomplished saddle seat competitor. Her long list of accolades include three individual gold medals and gold and silver team medals at the U.S. Saddle Seat International, American Saddlebred Horse Association (ASHA) Lurline Roth Award recipient, and serving as Vice Chairman of the Saddle Seat World Cup. She has competed many World Champions such as Callaway’s Show Me State, Anne Ster, and Power Parade.

Gillenwater is known as a thoughtful horsewoman, specializing her show horses to the discipline that she believes suits them the best. Her enduring passion for equine welfare continues through her service on the ASHA Equine Welfare Committee and the Gillenwater Equine Foundation. 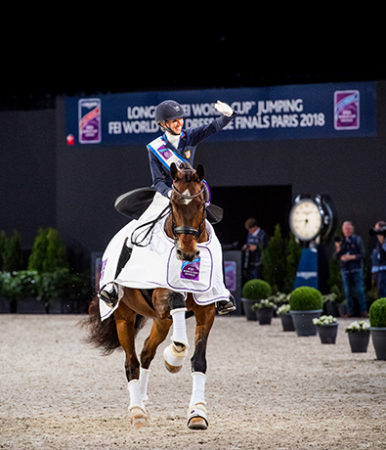 In 2018, Olympic bronze medalist Laura Graves earned her second trip to an FEI World Equestrian Games™ as part of the U.S. Dressage Team. She and her own Verdades not only contributed to The Dutta Corp. U.S. Dressage Team’s silver medal at the FEI World Equestrian Games Tryon 2018, but also made history in the Grand Prix Special as the first American combination to earn an individual silver medal at a world championship. Their success at the WEG boosted Graves and Verdades to the number-one spot on the FEI Dressage World Ranking List in October, marking the first time a U.S. dressage combination has been ranked as world number one. 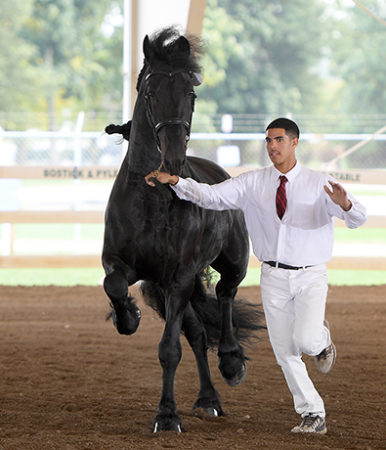 Twenty-two-year-old Bruce “Turtle” Griffin III has accumulated numerous International Friesian Show Horse Association world champion titles since turning professional at age 18. Griffin’s parents, Bruce and Staci, are professional trainers, and he has watched and learned from them to develop his skills and begin his own career. He competed in 13 classes with nine different horses at the 2018 IFSHA World and Grand National Championships, collecting numerous top-five placings. 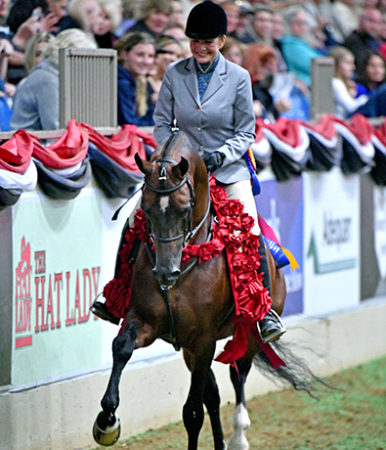 Wendy Potts is a talented horse trainer and owner of Freewill Farm in Mansfield, Texas. She began riding at age six and has been training Arabian and Half-Arabian horses for over 25 years.  Potts got her start training at Ventura Farms in Westlake Village, Calif., before moving to Texas and building the successful clientele she has today. One of Potts’s greatest accomplishments is the consistent success of her amateur riders.  Her clients have earned over 200 national and reserve national championships , and many of these talented riders have been with Potts for more than 15 years. Potts has been named the APHA’s Hunter/Show Hack Trainer of the Year an incredible 11 times.

In 2018, Potts competed in 20 qualifying competitions, culminating in an impressive showing at the U.S. Arabian and Half-Arabian Championship Horse Show, the pinnacle of competition for the breed. Potts took home three national championship titles in the hunter pleasure division, most notably besting 43 other combinations in the highly competitive Open Arabian Hunter Pleasure championship class. She continued to clean up in the hunter pleasure division at U.S. Nationals, bringing home three reserve championship titles and two top-10 placings. 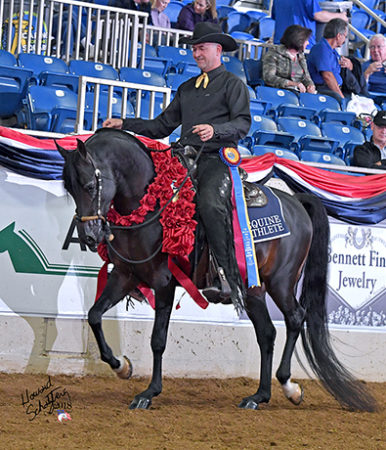 Jody Strand is the owner, trainer, and manager at Strand’s Arabian Stables. Strand’s Arabian Stables has boasted a 60-year tradition of excellence under his leadership and gifted horsemanship. Strand began training and showing for clients as early as age 15 as part of a family operation started by his father and uncle when he was five years old. In addition to training, Strand holds a national/regional Arabian judging card and has judged some of the Arabian Horse Association’s most prestigious competitions.

Although Strand is well versed in several disciplines, he has a reputation for being one of the top Western trainers and a passionate supporter of his amateur clients. Strand is a three-time winner of the Arabian Professional and Amateur Horseman’s Association award for Male Western Pleasure Trainer of the Year. 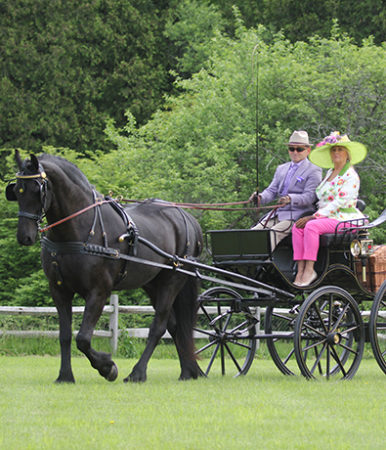 Eugene Sweeney is one of the farm managers and horse trainers at Bonterra Farms, a Friesian performance horse training and breeding facility. In 2018, he partnered with Friesian horses to accumulate several top driving awards. Early in the year, Sweeney competed in American Driving Society events with Daniel de G., winning the Gentleman to Drive class at Grand Oaks Classic and winning Pleasure Turnout and placing second in Reinsmanship in the single horse division at Orleton Farm. He claimed Friesian Country Pleasure Driving Open and Friesian Carriage Pleasure Driving Working Single titles, while taking reserve honors in Friesian Carriage Pleasure Driving Reinsmanship with Daniel de G. at the International Friesian Show Horse Association Region 1 Championship. Sweeney partnered with Daniel de G. again at the IFSHA World and Grand National Championships, this time collecting five championship and one reserve championship title in driving. In the national portion of the show, he was the high-point driver and his preliminary driven dressage score of 78.75% won the class. This is the first time Sweeney has won the Bill Robinson Trophy. 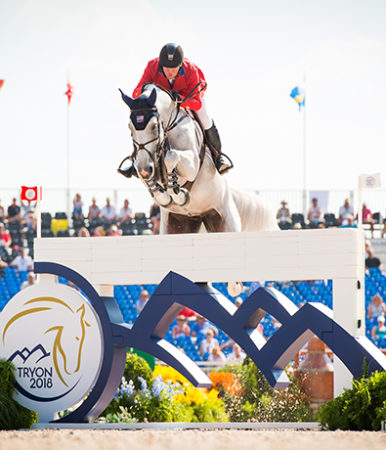 McLain Ward, 2017’s USEF Equestrian of the Year, reiterated his international acclaim on the world stage in 2018 in triumphant and record-breaking style as he anchored the NetJets® U.S. Jumping Team in their victorious gold-medal performance at the FEI World Equestrian Games™ Tryon 2018. Aboard Clinta, Ward aided the U.S. team back to the top of the podium for the first time in a world championship since 1986, riding in a fault-for-fault jump-off with Sweden to win gold by a mere two seconds. This medal added to the four-time Olympian’s accolades, including two team golds and a team silver at the Olympics, team silver and bronze medals at world games, individual gold medal at the 2015 Pan American Games, and the title of champion with HH Azur in the 2017 Longines FEI World Cup™ Jumping Final.

Ward’s 2018 accomplishments speak to his horsemanship. He and HH Azur were part of the team that tied for silver in the FEI Jumping Nations Cup™ CSIO5* Rome, where they also placed fourth in the Rolex Rome Grand Prix CSIO5*. Ward and Clinta were part of the bronze-medal effort in the Longines FEI Jumping Nations Cup The Netherlands. At CHIO Aachen, Ward won the Prize of North Rhine-Westfalia with Clinta and placed second in the Turkish Airlines-Prize of Europe CSIO5* with HH Azur. He and Clinta also won the $250,000 Sapphire Grand Prix of Devon CSI4* and the $382,800 Longines Grand Prix of New York CSI5* at the Longines Masters of New York, among others. With HH Azur, he placed third in the $384,000 Rolex Grand Prix CSI5* and won the $132,000 WEF Challenge Cup Round V CSI5* during the 2018 Winter Equestrian Festival. Ward’s list of accomplishments is not only impressive, but also brings positive attention to the sport that he loves. 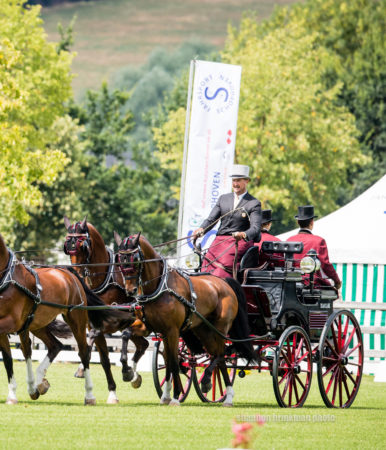 In 2018, Chester Weber’s impressive driving career was further solidified in the history books as he and his team of four-in-hand horses contributed to the U.S. Driving Team’s first-ever gold medal at the FEI World Equestrian Games™ Tryon 2018. Representing his country for the fifth time at a WEG, Weber also added a second consecutive individual silver medal to his repertoire. Prior to the WEG, Weber and his horses scored five wins at Palm Tree CDE, Live Oak International, the WEG Driving Test Event, Riesenbeck International, and CAI Beekbergen, along with a top-10 finish at the World Equestrian Festival CHIO Aachen.

Weber is a four-time FEI World Driving Championships for Four-in-Hand competitor, earning the individual silver and team bronze in Riesenbeck in 2012 and the individual silver in Beesd in 2008. He has collected 15 USEF Four-in-Hand Horse Combined Driving National Championships over the years, as well as two USEF Pair Horse Combined Driving National Championships. His family’s Live Oak Plantation has hosted a world-renowned driving and jumping competition, the Live Oak International, for the past 28 years. Known as the largest international-level combined driving and show jumping tournament in the country, each year the event welcomes drivers, riders, trainers, coaches, and owners from across North America and Europe. Weber’s national and international success, as well as his commitment, have brought excitement and inspiration to the sport of combined driving.

Online voting is open now through Thursday, January 3 at midnight. Log your vote at USEF.org!