A Love Letter to a Racehorse 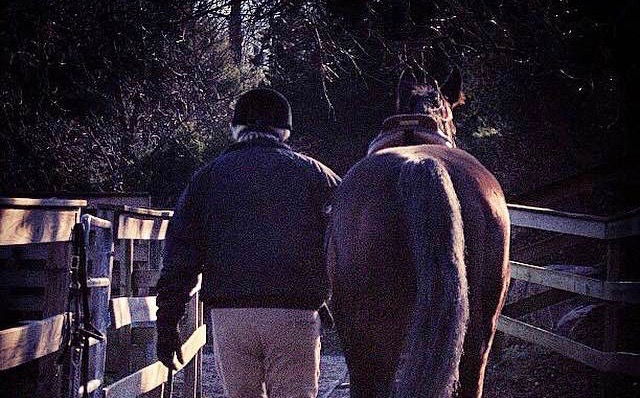 I have a confession to make. The day after I brought you home from the auction, I was angry and resentful.

Not toward you, but at the man who brought you there, who told me that you were sound and gave you drugs to make you look like you were. The drugs wore off, and you couldn’t walk. And he didn’t return my calls.

Your injuries, which I later found out were incurred during your last race in a short but successful career, ended up being of the type that would take a long time to recover from. That’s what made me upset. I didn’t know if I had it in me to endure the roller-coaster ride of horse rehabilitation yet again.

I had a lot of people giving me advice, which ranged from euthanasia to breeding to just bringing you back to the auction to an uncertain fate.

Or…I could just breathe in, breathe out, put one foot in front of the other and accept life on life’s terms.

There really was no decision to be made. I promised you in the trailer before we left the auction that I would never hurt you, and that I would always do everything within my ability to give you the best life I could. I have many faults, as you will likely have found out, but I do keep my promises.

Oh, that crying into your mane when we were alone it the stall? That was just me feeling sorry for myself.

I was projecting about months and months of care, medical expenses, the chances that you wouldn’t recover, the chance that I would fail you. That’s just how my mind works sometimes, especially when I’m scared. I think a year or a decade at a time. But life gets lived a day at a time, and that’s how we managed: a day at a time.

You patiently let me wrap your legs until I became skilled at it, and you never lost patience with me. You stood still to let me run a cold hose on your leg, and you let me hand walk you with no complaints when I know you didn’t feel like it.

You seemed to know that I needed encouragement so every time I came into your view, either after an absence of 30 seconds or four hours, you would nicker furiously. You found a way to express gratitude in a way that a human could understand it.

Days built upon days, which became weeks and then months, and your body slowly became whole again. I was as cautious as you were anxious. You broke out of your small day paddock into the riding arena one day and your enthusiasm set our program back a few months.

I became doubly cautious and did not read the signs that you were ready.

Somehow you broke out again, and as I watched you from the house I was at once awestruck and petrified. Awestruck by the beauty of you expressing your elation at being free to be a horse again, and petrified at the prospect of yet another setback.

I waited days for the consequences of your adventure, but they never came. It seems that you knew best. You had healed! 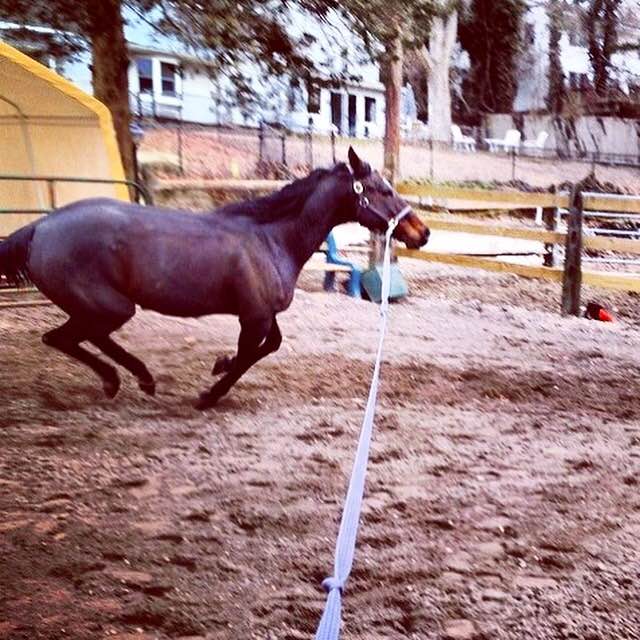 Lola on the longeline: admiring the results of twelve months of rehab.

We learned to speak each other’s language with our trainer as our interpreter. 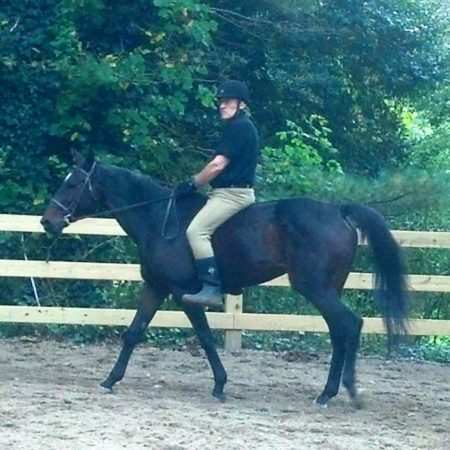 The author with Lola: a relationship built on mutual trust.

Lola, you are more than just a talented horse. You are not my first horse, nor the first horse I have bonded with. You are my first mare, my first Thoroughbred, and my first racehorse. Other horses have allowed me into their world. You, however, have always made me feel that I am a part of yours. You are always trying to be a better horse for me, and it makes me want to be a better rider.

From the very first time I met you at the auction, I felt not sympathy for your situation, but connectedness. Your dark, kind, liquid eye told me that you felt the same. You weren’t pleading…you were knowing. 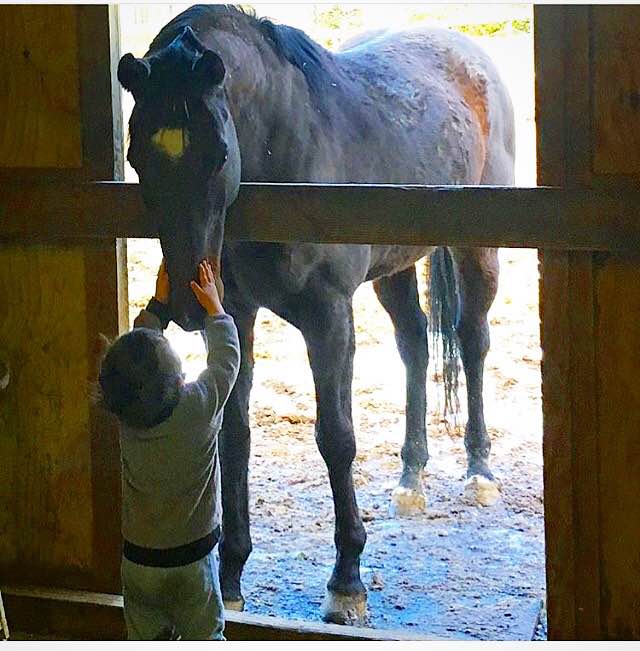 Daniel and Lola: When your grandson has a racehorse for a pal.

The other day I ran across the business card of the man who brought you to the auction. It had a little religious symbol on it that I once cynically thought must have been put there to throw the unwary off track, to expect honesty and trustworthiness where there was none to be found. For a while, those thoughts were used to fuel a resentment.

Now, however, I believe that man was an instrument in the plan of some higher power, a plan to bring us together, which could have worked no other way. Had it worked any other way, I would have been cheated out of my once-in-a-lifetime horse.