America’s reigning queen of dressage has her crown firmly in place.

In their first international appearance of the year, Laura Graves and her Olympic partner Verdades captured the FEI World Cup Grand Prix Freestyle in Wellington, FL with a decisive 84.675%. It is the highest score ever awarded at the Adequan® Global Dressage Festival (AGDF) and the third highest score ever achieved by the 2016 Olympic individual bronze medalists.

That’s not to say it was easy going, revealed Graves.

“He is such a hot horse that I rode him three times [before the class],” said the 30-year-old rider. “We brought him out at lunch time and with the wind he was a little crazy and we were a little concerned as we know what he can be like. But I am excited about this score — and the score from the grand prix [79.63%].” 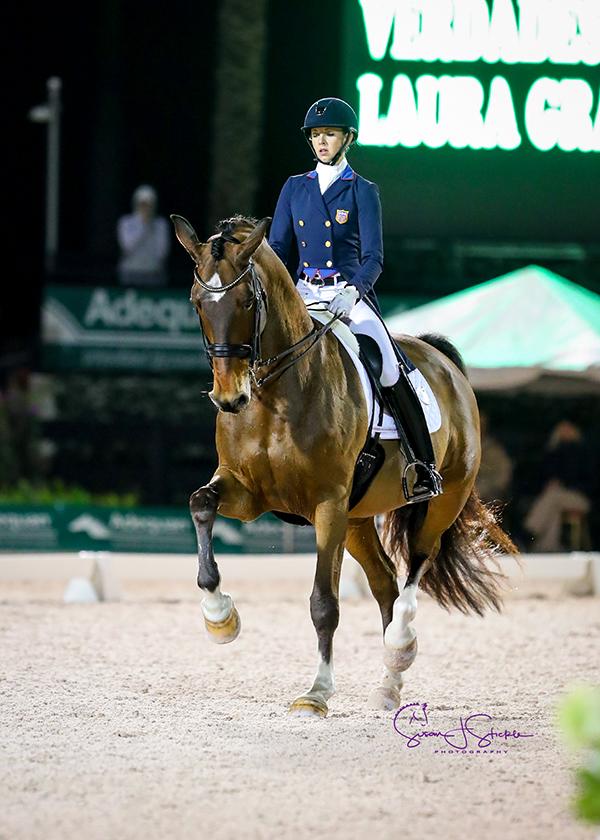 The complex floorplan, originally crafted by Graves’s for her first-ever championship, the 2014 FEI World Equestrian Games in Normandy, includes passage half-pass, two-time changes on a curve melting into one-times and ultra-steep trot half-passes.

“I was thrown into the fish tank that year, so I studied all the other riders’ floorplans. And the music comes from Rudy, a football movie about an underdog kid,” said Graves.

Don’t expect to see the same rendition on their next competitive appearance though. Graves will be altering the floorplan ahead of the CDI5* AGDF show in February.

“He’s such a clever horse that he guesses what’s going to happen, which is why we’re going to change it,” she explained.

Graves trains with Debbie MacDonald and is currently ranked fourth in the world.

Watch their winning ride at The Chronicle of the Horse.