The Future of Equestrian Sport 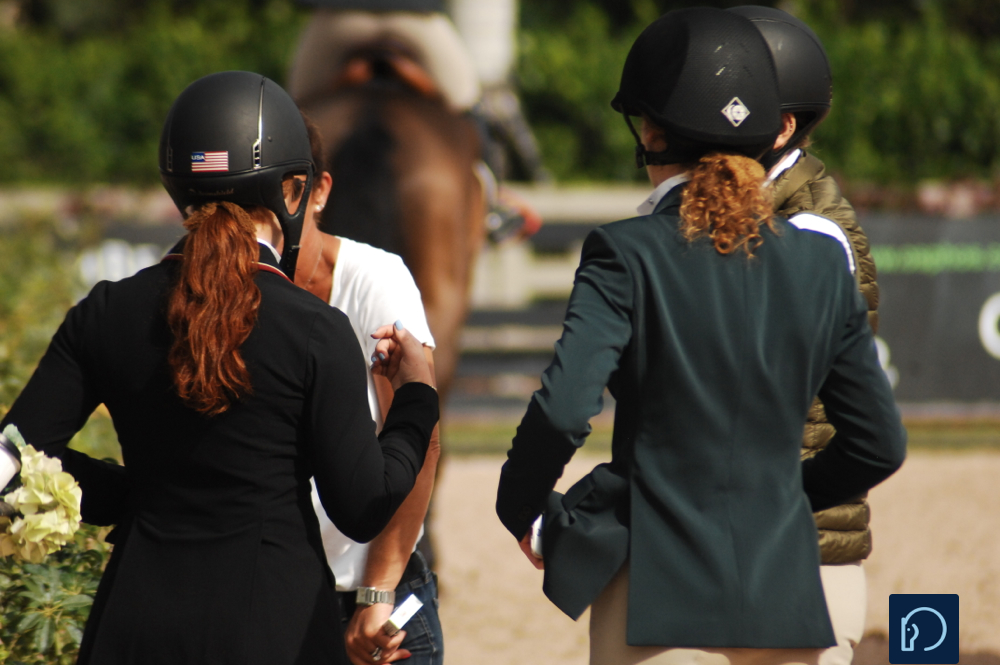 I started 2017 by attending two big meetings—one which celebrated the 50th Anniversary of the Intercollegiate Horse Shows Association (IHSA), and one which heralded the start of a new era for the United States Equestrian Federation (USEF, now US Equestrian). I was struck by some common themes (and common company) between the two meetings, and as we begin the new year, it has caused me to ponder the long term future of equestrian sport.

Equestrian sports are largely considered “elitist” by those outside of the industry, and their continued existence in the Olympics Games remains questionable.

Even within the business, there appears to be a dramatic divide between what I will call the “grassroots riders” and the “upper echelon” in terms of needs, motivations for being involved with horses and the ability to reach their personal (and performance) goals. At the same time there are those who would argue there is no gap; that the upper echelon depends upon the grassroots and the whole community is structured like a pyramid—only as strong as its base. 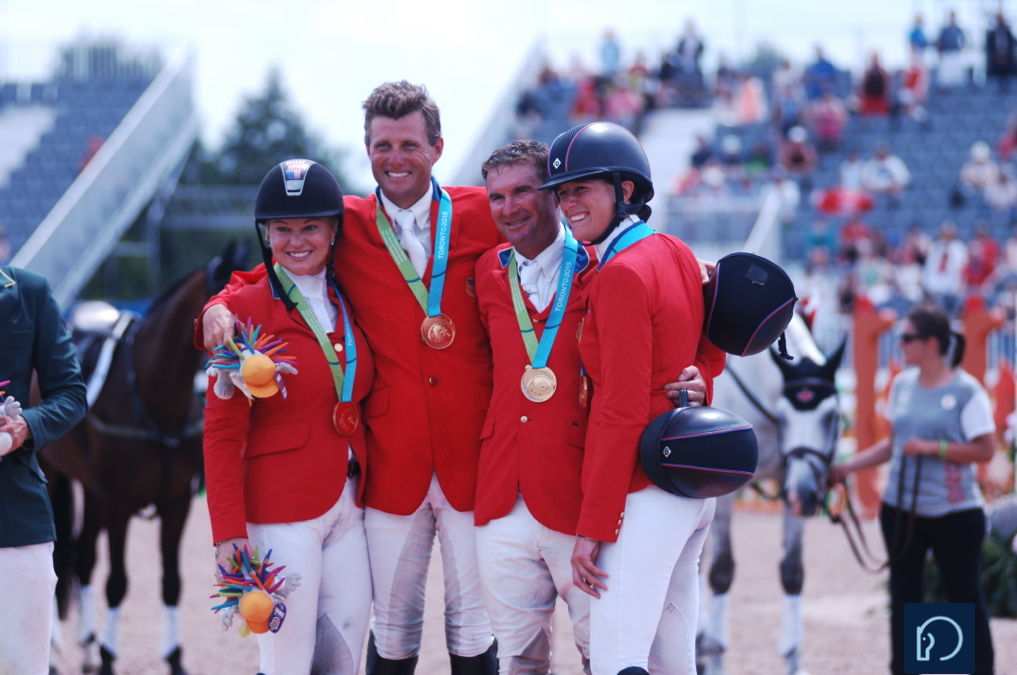 I was born with a horse bug. My earliest memories of wanting to ride date back to nursery school. My parents aren’t “horsey”, and neither were my closest friends growing up. How often have we heard this kind of story? That this obsession should come from seemingly nowhere is unexplainable, yet it happens, over and over; people who have a seemingly insatiable desire, or need, to be connected to horses. Where that drive takes them is a journey unique to each individual. Some may stand atop a medal podium. Some may be fulfilled with a quiet walk down the trail.

Wherever we fall on this spectrum we are all part of the same greater community. 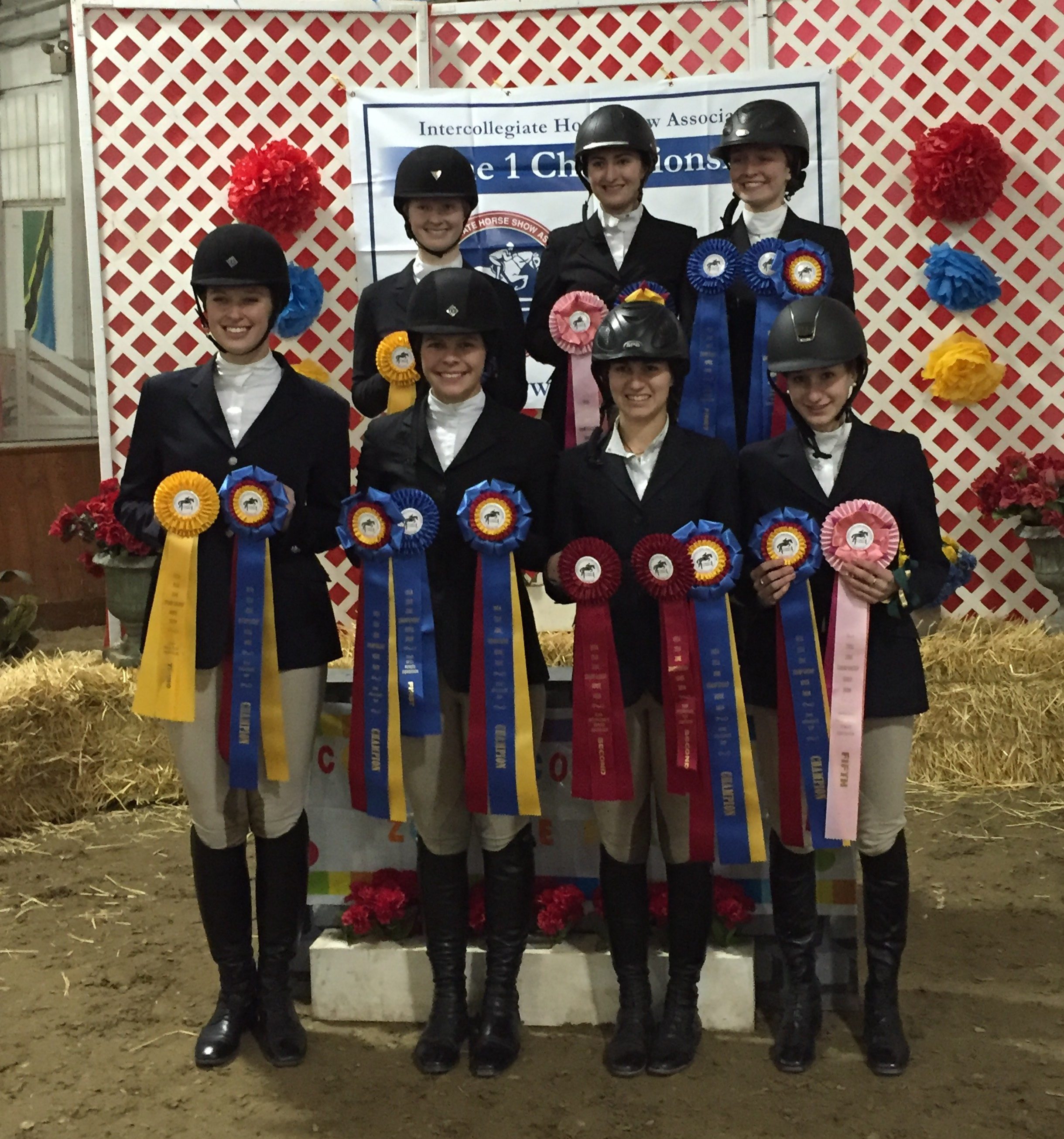 I believe that, whether we like it or not, the events which affect the “upper echelon” of equestrian sport do affect the rest of us; sometimes as a trickle down, and sometimes as a mad rushing current. It is a good thing when we are inspired by a gifted rider’s performance on a talented horse; it is bad when we are left explaining to friends and family why a horse dropped dead at a show, or a big name rider/trainer is suspended for positive drug tests.

But the reverse is true as well. If an intrinsically horse-loving young person grows up to recognize that there are no longer open spaces to ride, affordable boarding stables, quality instruction and opportunities to reach personal goals, and put their horse dreams on a shelf, then we all lose.

The USEF is the umbrella organization which oversees most of the “sanctioned” equestrian sport in the US. It sets rules, approves licensed officials, offers year-end awards programs and more. Yet most people are members only because they compete and membership is required to show. When they stop competing or take time off they allow their membership to lapse. Some of the controversies that have come to the forefront in sanctioned competition most recently—covert abuse of drug rules, turning a blind eye to questionable training practices and ever increasing fees—have caused some horse lovers to opt out of the organization and leave competition behind. I say “horse lovers” because some of these are driven individuals who have put their love for the animal ahead of their love of competition. 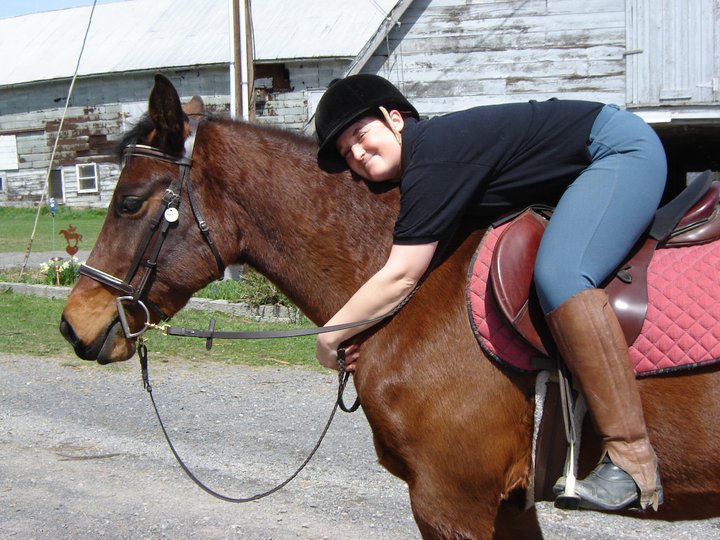 For me, this is what it comes down to: love of the horse. At the end of the day it doesn’t matter whether someone shows or not, what discipline they ride, or even how often they ride. What matters is that they love the horse and they are committed to giving the horse a safe, humane life free from suffering or misery, and that they love having that experience. There is a woman at one barn I go to who doesn’t seem to ever ride. She grooms, longes and plays games with her horse on the ground. It wouldn’t be for me, but that doesn’t matter. She is happy, her horse is happy, and everyone wins. We are both horse lovers; we are equal equestrians.

New US Equestrian President Murray Kessler sent a letter to all USEF members (of which I am one) at the first of the year, which he basically opens with, “I love horses.” He has been involved at all levels of equestrian sport, from local shows to watching his daughter Reed compete in the Olympics.

People who only know him as the Father of Reed might dismiss him as another one of those “upper echelon” people. He has been successful in business and clearly has become financially secure to the point where exceptional horses are a reality. Despite this, my sense from the US Equestrian Annual Meeting is that Mr. Kessler still remembers what it was like to struggle to find the funds to attend a local show. He holds a bigger, broader vision of what US Equestrian could be for our industry. Instead of a pyramid, I think he sees a circle where the grassroots supports the top, but the top turns around and gives back to the grassroots. I think that is something to be excited about.

“Whether we like it or not, the events which affect the “upper echelon” of equestrian sport do affect the rest of us.”

Mr. Kessler has promised he will serve as an “advocate for our membership at all levels in all breeds and in all disciplines. Every member of the Federation is important and plays a role in our future.” He has vowed to help the organization take a stronger stance on fairness and safety in equestrian sport, going so far as to state that the “purposeful doping of horses cannot and will not be tolerated”. He also pledges to increase access and participation in the the show world. “Competing in equestrian sports has become so expensive that it is prohibitive,” writes Kessler. It is beyond time for someone in this level of leadership to formally act on these points, for the good of everyone in the industry, not just the competitors.

Because here’s the thing: on some level, the backyard owners need the horse show people. Horses are a luxury item. A robust industry means resources are being produced and consumed, keeping tack retailers, grain suppliers, hay producers, instructors, trainers, boarding stables, veterinarians and farriers in business. When the number of people consuming these resources dwindles, they become scarcer and suppliers go out of business. Then the cost goes up and all horse owners are forced to make difficult choices. 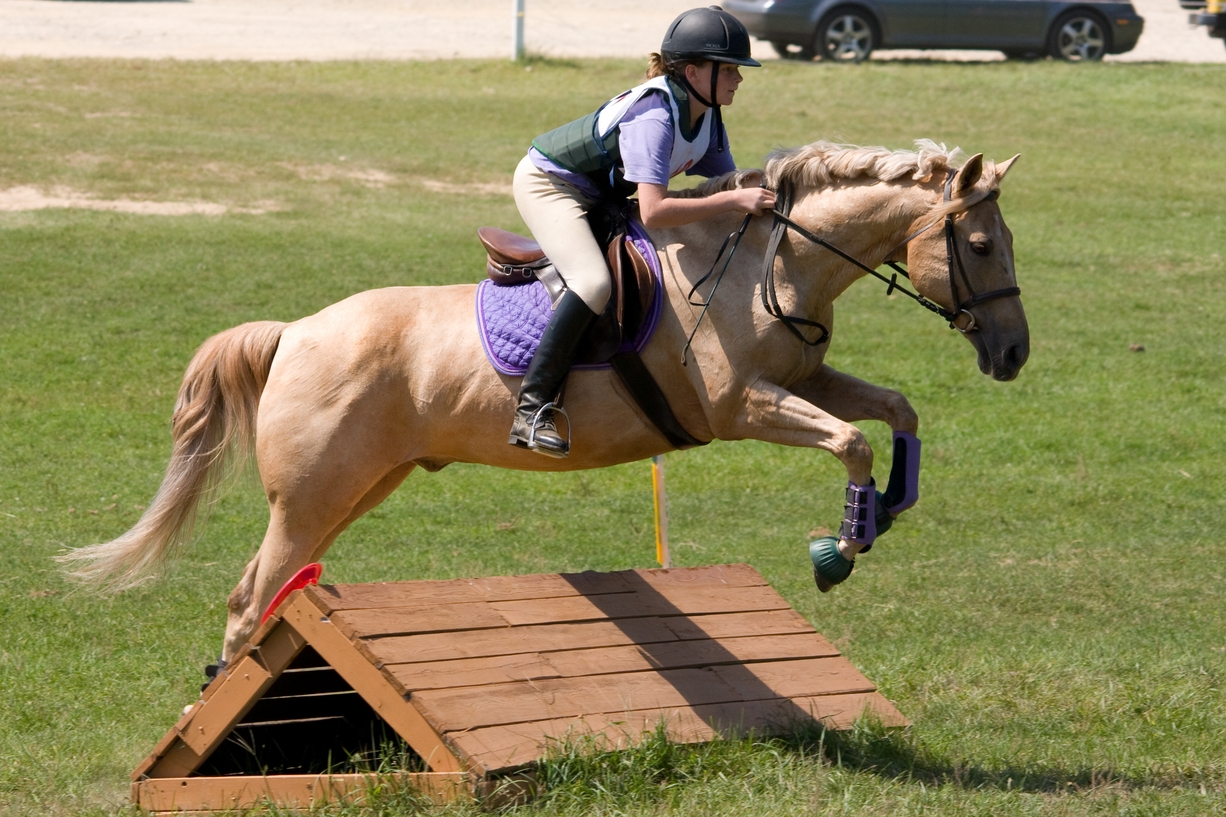 Kessler noted that his research shows participation at the smaller USEF shows has declined by 40% over the past decade, while entries at large scale (more costly) events have gone up. In my role as the organizer for the University of New Hampshire Horse Trials, I have noticed a similar trend in eventing. Our competition draws from a more local/regional audience, and we used to be full with close to 200 entries just a few days after opening. Now, we are lucky to run 150 and are forced to accept entries post-close. I hear other organizers of similar competitions say the same thing. Our sanctioned summer dressage show used to run four rings with a waiting list; now we can barely fill three.

This slow and steady decline in participation is the result of so many different factors, but it is a concerning trend. Undersubscribed competitions can’t sustain themselves forever, and sooner rather than later they stop running. This takes the bridge between schooling competition and more prestigious ones away, leaving a gap in our circle that is hard to overcome.

US Equestrian’s new vision is “to bring the joy of horse sports to as many people as possible.” It has created a new “fan” membership, where for just $25 fan members can have access to many of the benefits the organization offers, including access to the new learning center (which has educational videos featuring well known riders and trainers), access to the USEF network, the youth high school lettering program, and more. As part of their new membership recruitment efforts, US Equestrian has given a free fan membership to every member of the IHSA and Intercollegiate Dressage Association and perhaps some other youth organizations as well. It is, frankly, refreshing. 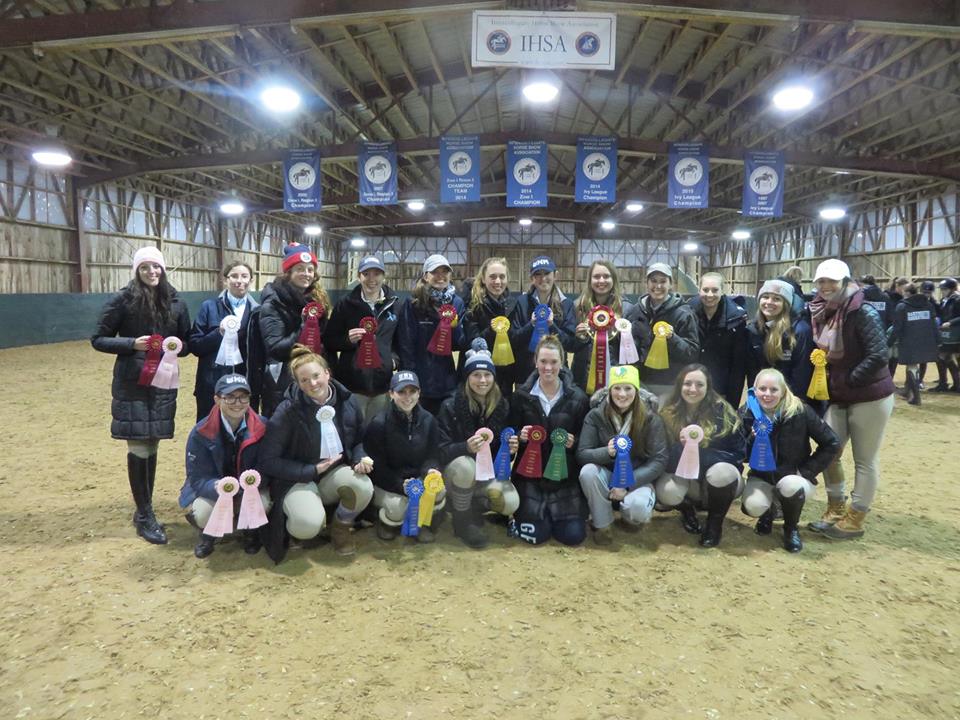 At the IHSA’s 50th Anniversary Banquet in January, I was struck by how many generations of equestrians were in attendance. Everyone in the room was connected through just this one organization, and those present were but a small sliver of the total number who could call themselves a current rider, alumni, coach or former coach of the IHSA. There are close to 10,000 undergraduate members today; over fifty years, that is an enormous community. 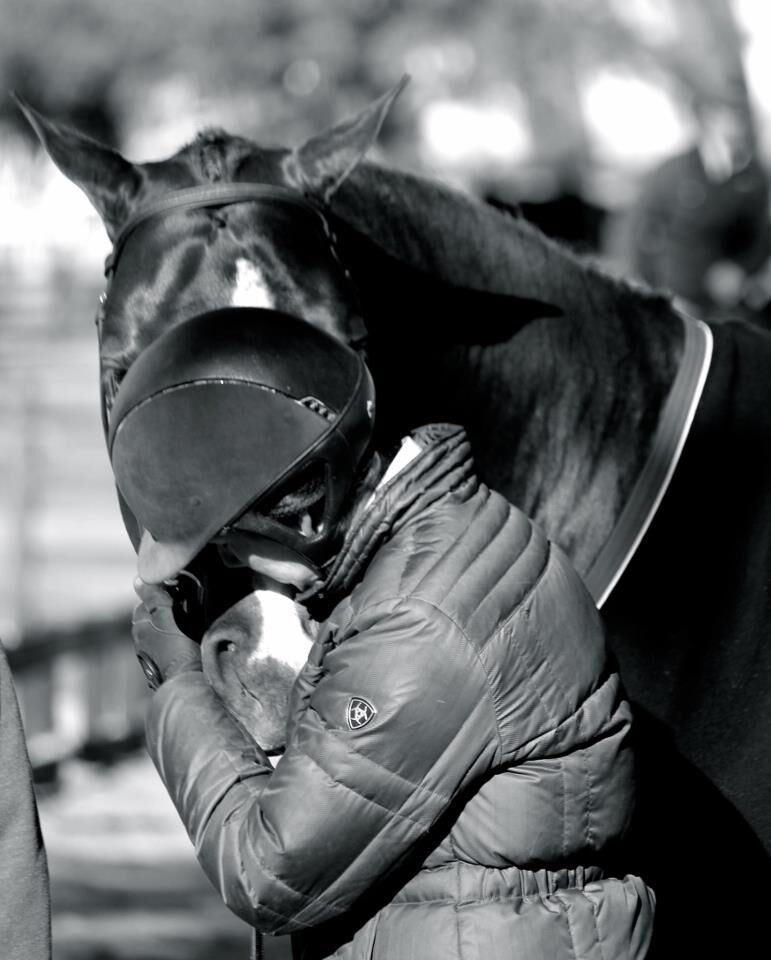 Each and every equestrian needs to be mindful that we as a collective group are completely connected to one another. Threats to open space access, to collegiate riding programs, to agriculture as a whole, all affect us. It is crucial that equestrians seek the synergy amongst our different groups. We must work to cultivate a supportive, not competitive, atmosphere within our ranks. Our tack, goals and preferred riding speed may be diverse, but we should all be united by one thing: our love for the horse.

I challenge each of you, no matter how you define yourself as an equestrian, to always remember the love of the horse. Share your love with others. Because they are out there—those young people with the intrinsic, insatiable need to be with horses. They are looking for you, for me, for all of us, to help them to fulfill those dreams. 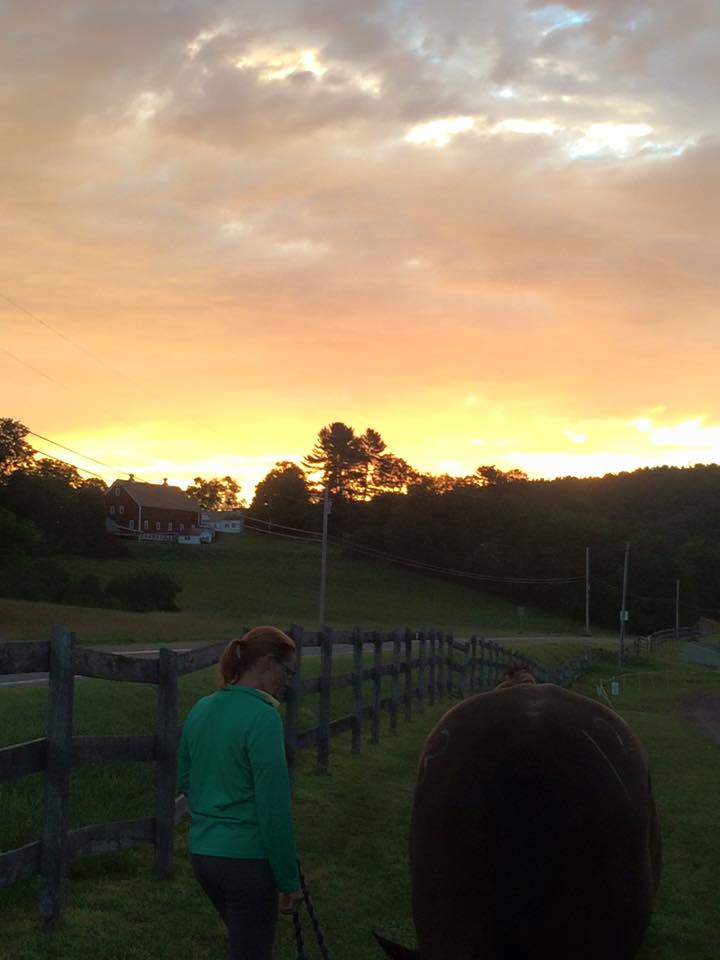 Christina Keim is an avid equestrian with competitive results in eventing, dressage, and show jumping. She is a former area eventing champion and has had horses finish in the top ten for national year end rankings with the USEA. Most recently, she has been concentrating on the sport of competitive dressage, where she has earned her USDF Bronze Medal. Additionally, she currently sits on the Board of Directors for the Intercollegiate Horse Shows Association and holds a Masters in Education from the University of New Hampshire. 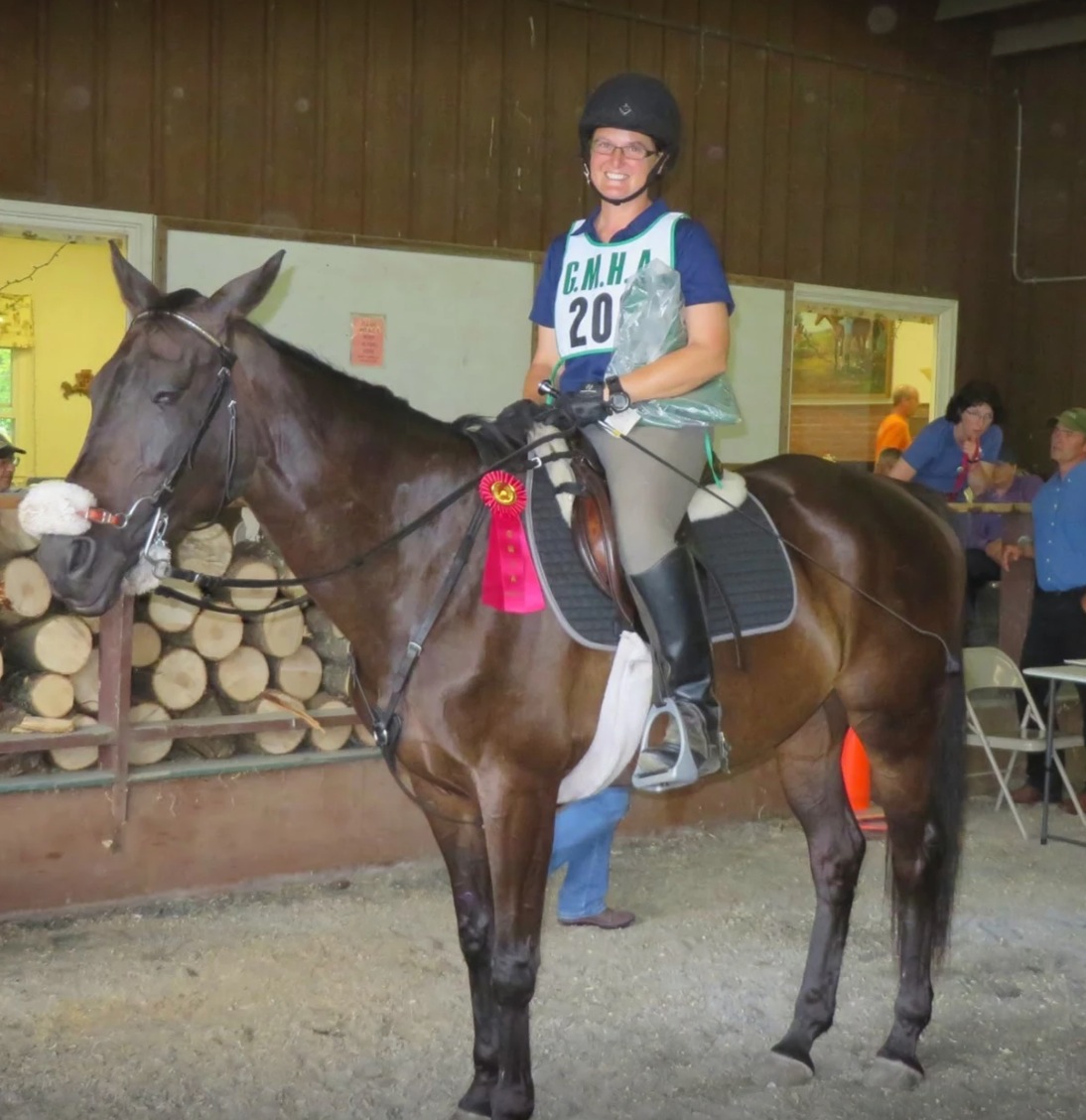