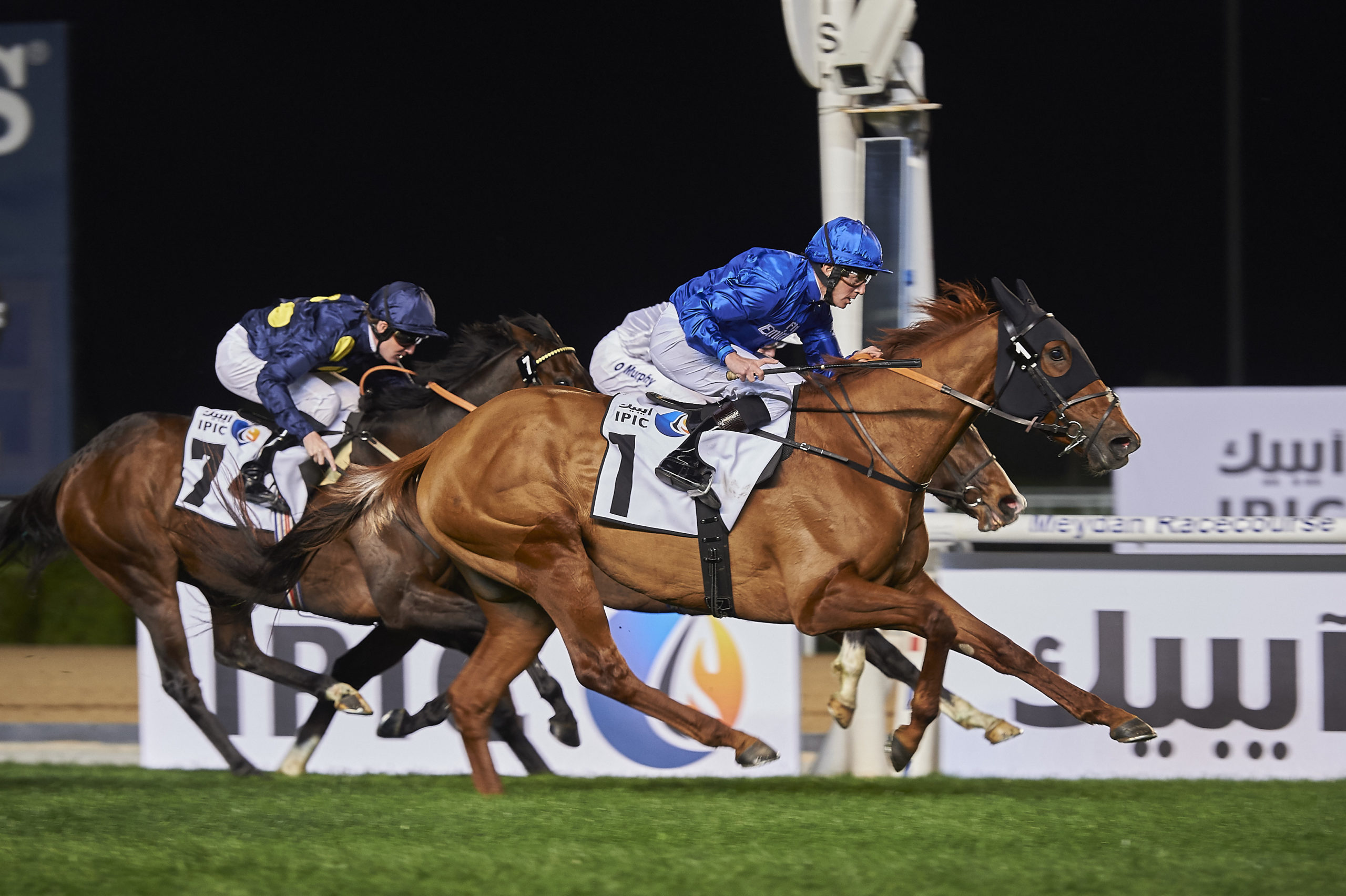 Blue was the color of the fourth meeting of the Dubai World Cup Carnival at Meydan Thursday as hometown equine empire Godolphin and its boys in the royal blue silks won five of the six Thoroughbred events on the evening’s card, including the co-features.

In the race expected to be the evening’s most special and exciting, favored Very Special proved to be just that in a consecutive repeat win in the mile-long Group 2 turf Cape Verdi Stakes for fillies and mares. The 5-year-old daughter of Lope De Vega piloted by Jim Crowley denied the gold tiara to Opal Tiara by a half-length with Muffri’Ha a neck in show and Silver Step missing the bronze medal by another neck.

“Very Special is very special and that is how she got her name,” punned Godolphin lead trainer Saeed bin Suroor. “She has been doing really well since she was a 2-year-old and has improved physically with age. She is getting better all the time.”

Crowley explained his strategy differed from what his nine competitors may have expected. “Tahanee was very sharp out of the stalls, so I did not force her and just sat where she was happy. When we turned for home, she had the extra gears to stay out of trouble.”   The jockey believes Very Special may have added another card to her hand. “Well, another furlong won’t be a problem for her,” said Crowley in a reference to the Feb. 16 nine-furlong Balanchine, a race she also won last year. “The good thing is she can compete running but can take a lead as well.”

Bin Suroor is cautiously planning a followup. “She ran a huge race so we will see how she comes out of this run before planning where she goes next.”

The win was the fifth in 10 starts for Very Special and her third Group 2 triumph. And, while we are overdoing the over-obvious pun, the win was also very special for bin Suroor as the Cape Verdi marked win number 200 for him at the Carnival. “Yes, this was very special because Dubai is my hometown,” bin Suroor added with a smile.

The likely next step for the winner remains a dance on the grass in the Group 2 Balanchine. A repeat win in that contest will inch her closer to the $1 million career earnings mark and a possible start on World Cup day. 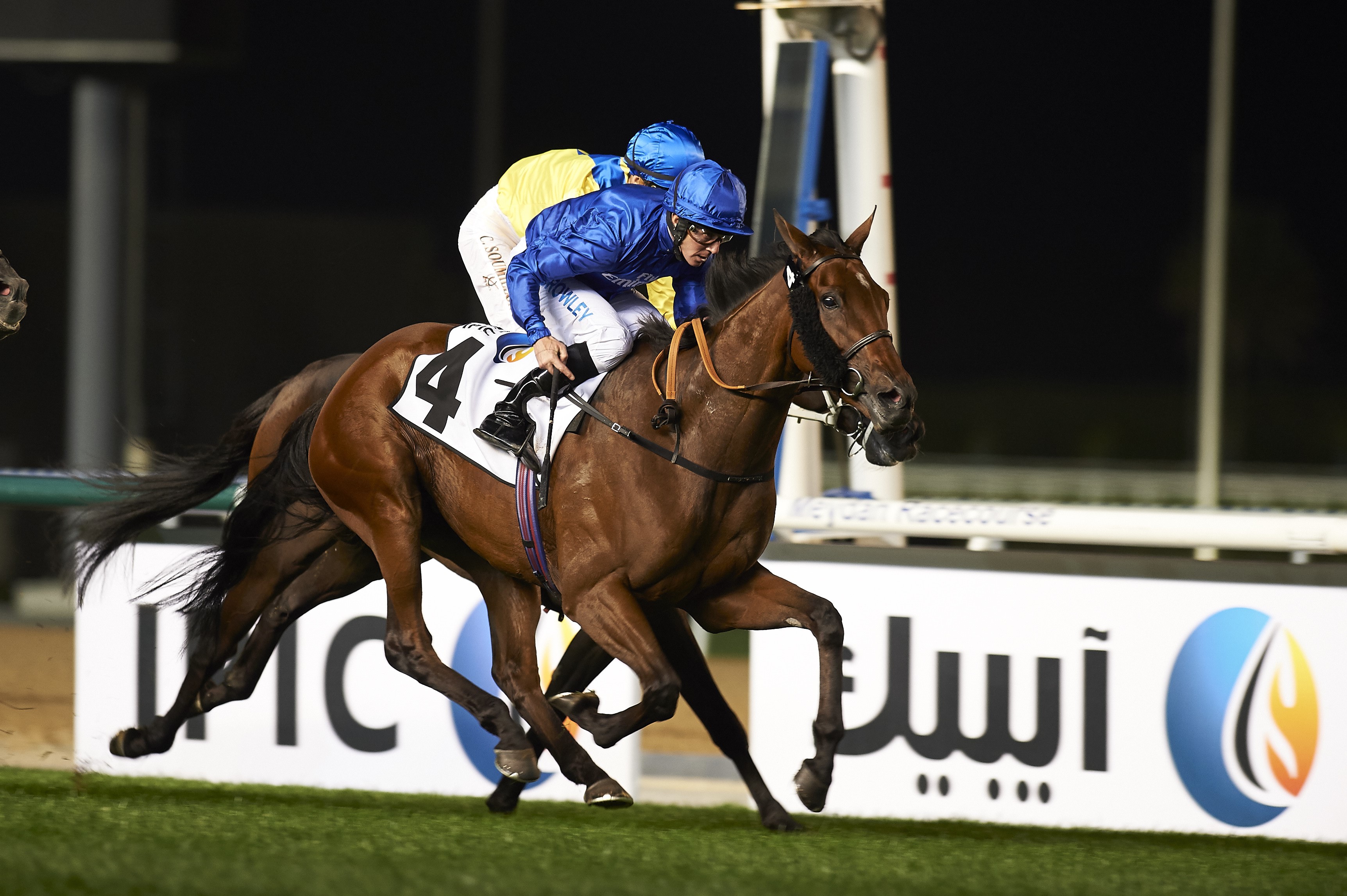 A promising night had already been assured for Godolphin in the earlier co-featured 9-furlong turf Al Rashidiya when Promising Run beat an all-boys competing field and delivered on her promise by putting out the light on Light The Lights by a half-length with Earnshaw earning third by a neck.

It was the first of two feature wins on the evening for jockey Crowley as well as the fourth career win and second Group 2 for the 4-year-old daughter of Hard Spun. Her victory ended a five-year-long win streak in the event for South African trainer Mike de Kock and jockey Christophe Soumillon.

Features aside, the most compelling Godolphin performance was a 1-3-4-5 blue streak finish on the dirt in the 7-furlong UAE 2000 Guineas Trial. Fly At Dawn flew through the dusk to gain a one-length space over Cosmo Charlie with Godolphin stablemates Top Score and Best Solution all besting the 14-horse field. 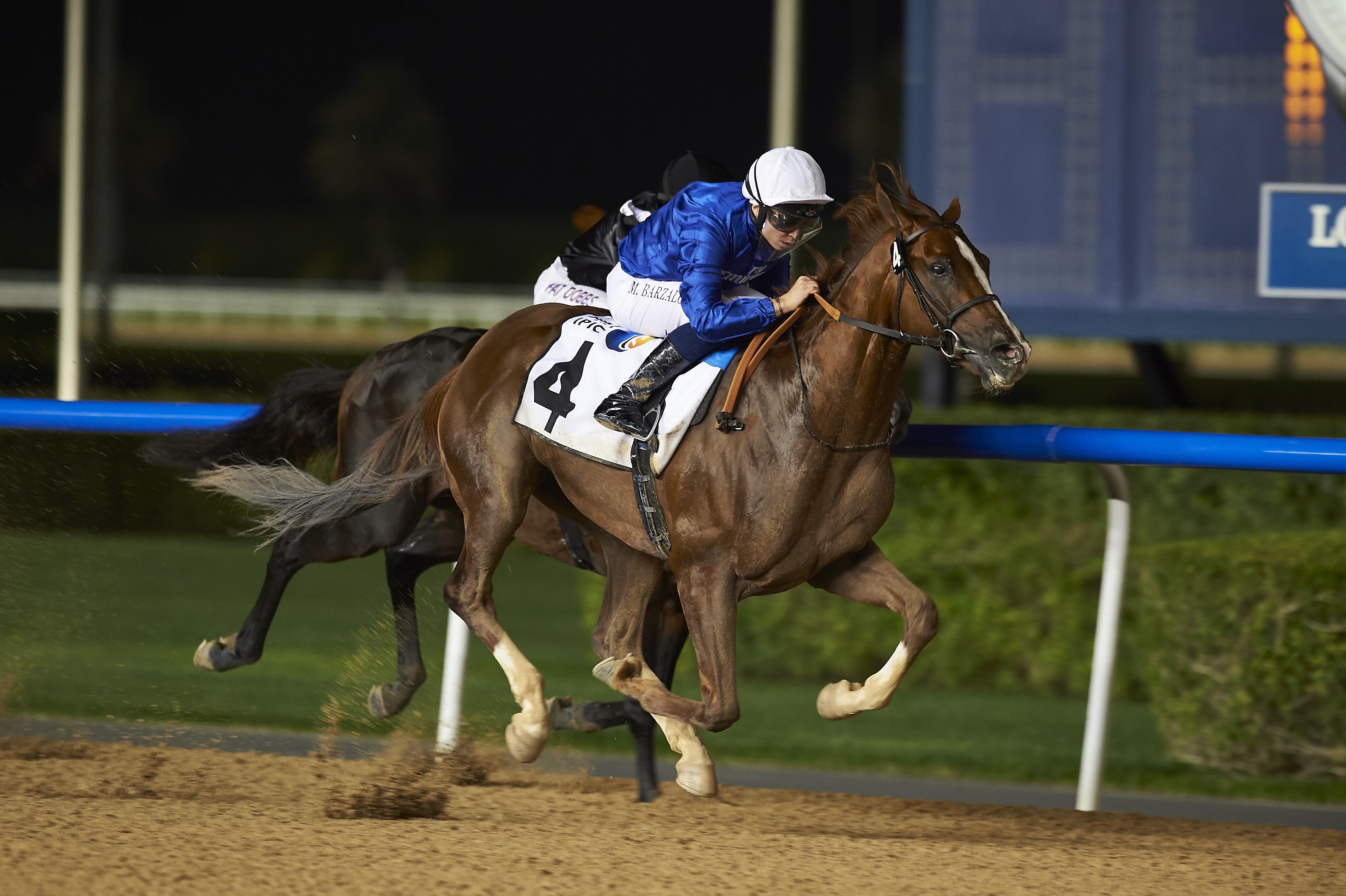 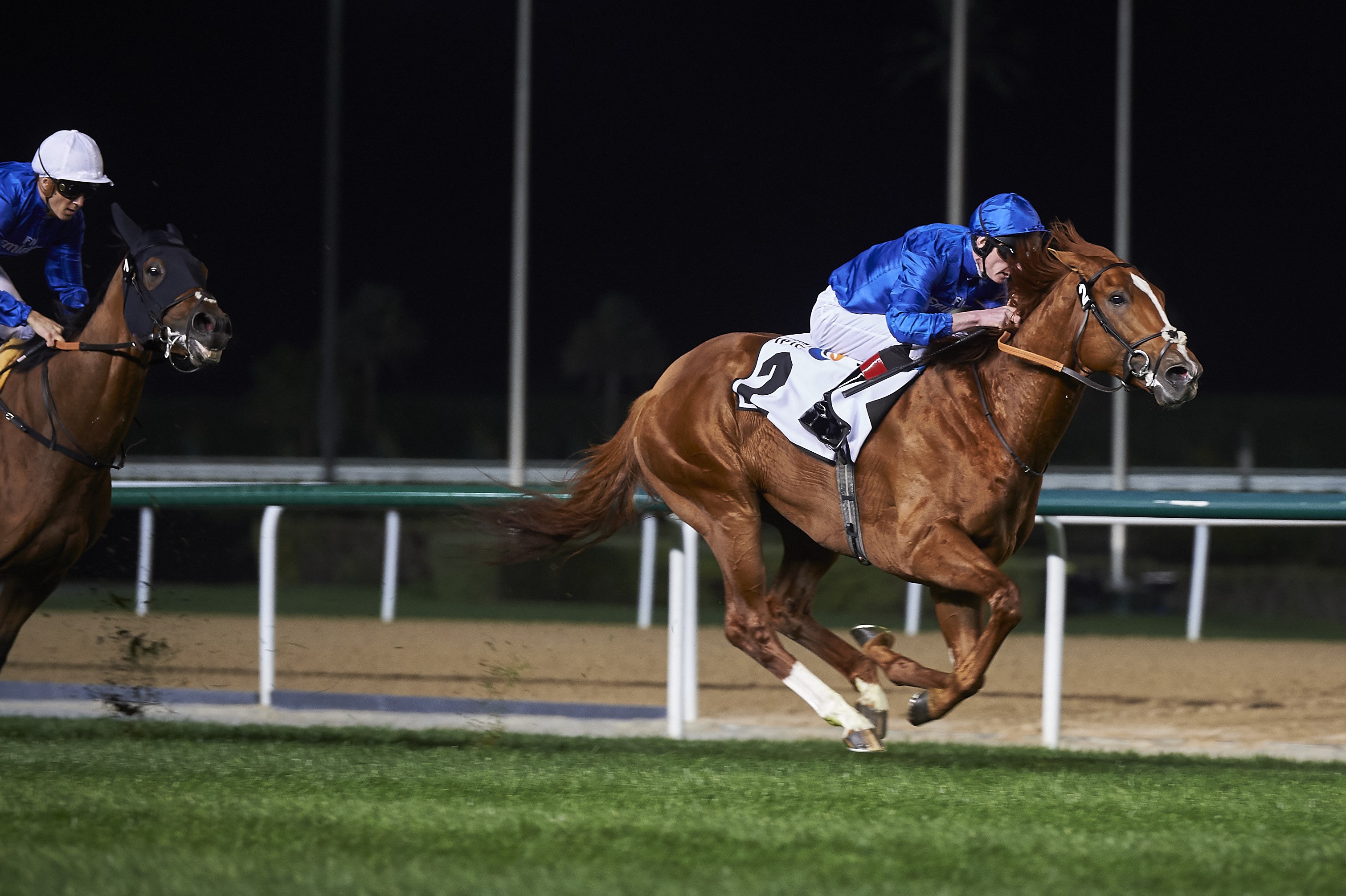 The only misstep on Godolphin’s evening came in the mile-long dirt handicap when Heavy Metal orchestrated a two-length score over Frankyfourfingers. The best Godolphin’s Alabaster could carve was third place.

But the empire struck back in the evening’s closing 3/4-mile Borealis turf handicap when Baccarat snared the aurora from Jungle Cat by a neck in a 1-2 Godolphin finish with Final Venture 1 1/4 lengths in third and Steady Pace in fourth just off the pace of a 1-2-3 Godolphin finish by a neck. 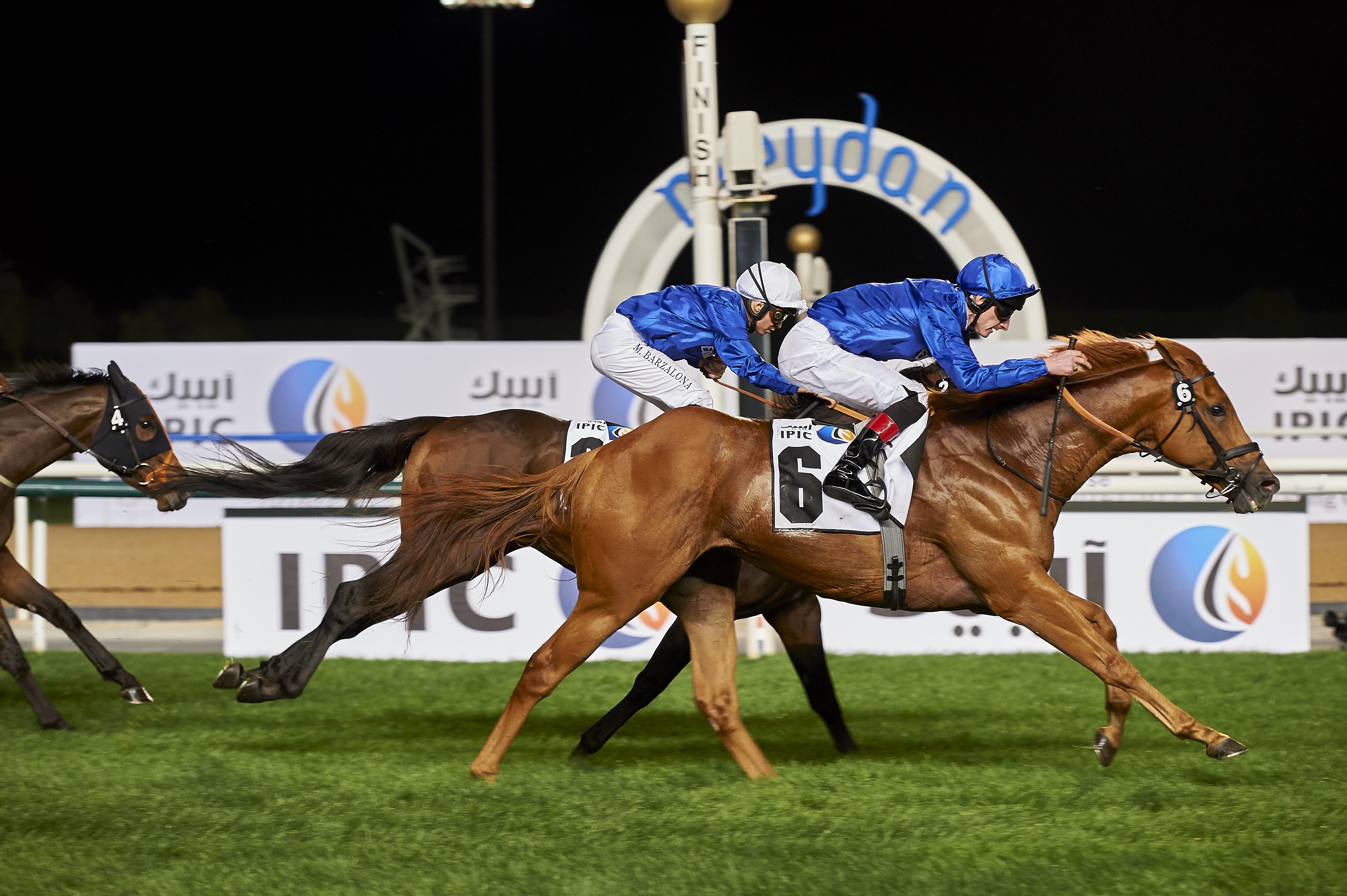 The Godolphin empire strikes back with a 1-2 finish in the Borealis to close the night. ©Andrew Watkins/Dubai Racing Club

The card opened with the Purebred Arabian Maktoum Challenge R2, with runners now competing for a spot in the Kahayla Classic for Purebred Arabians, the traditional card opener on World Cup day. French runner Faucon Du Loup was so happy not to have any Godolphin opposition that he torched Rb Dixie Burning over 11 furlongs of dirt by a telescopic 11 lengths with Versac Py another 2 1/4 lengths back in third.

Dubai World Cup preparations get serious this Thursday with the featured Thoroughbred version of the $250,000 Group 2 dirt Al Maktoum Challenge R2. Two previous winners of this race, Moon Ballad and Prince Bishop, went on to win the $10 million Dubai World Cup in 2003 and 2014 respectively.

Also in the gates will be hopefuls for the Group 1 Golden Shaheen and the Group 2 Godolphin Mile on World Cup day dashing it out in the Group 3 Al Shindagha Sprint on the Meydan dirt.