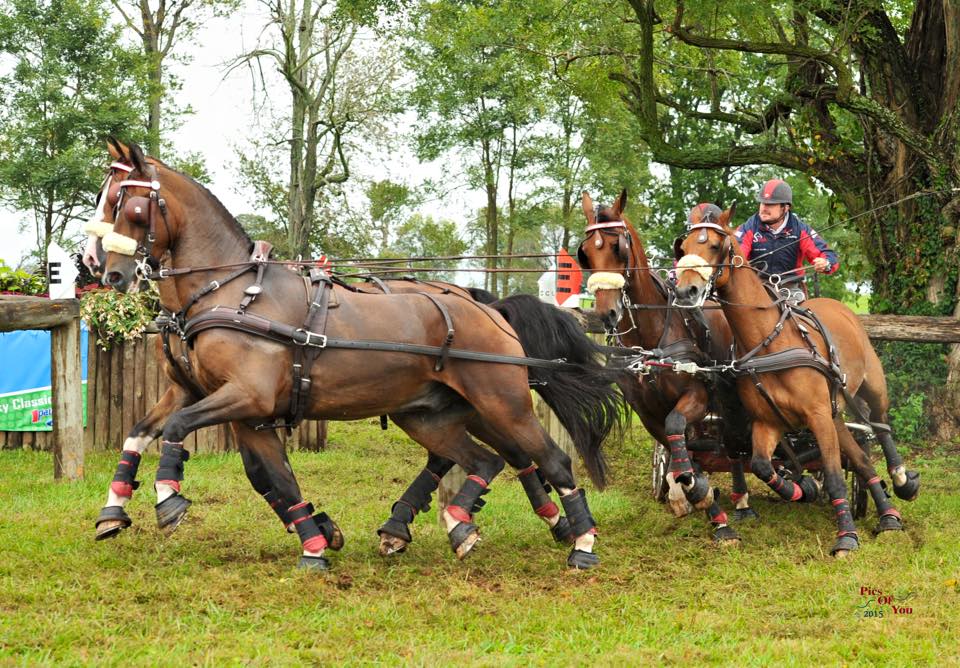 The 2015 USEF Four-in-Hand Driving National Championship started out cold and rainy, but was warm and sunny for Sunday’s cones phase in the Rolex Stadium at the Kentucky Horse Park. The lovely day set the stage for Chester Weber to win his 12th USEF Four-in-Hand Driving National Championship title, leading the division from start to finish during the Kentucky Classic CDE. The field of four competitors demonstrated great driving throughout the competition and is looking strong heading into a World Championship year.

Weber (Ocala, Fla.) and his and Jane Clark’s team had a fantastic week, displaying great skill in all three phases. He had a different line-up at the championship, bringing a younger, inexperienced horse, Danzer, but the team of Dutch Warmblood geldings performed well. Their quest for a national title began on Thursday in the Rolex Stadium with their signature lovely dressage test. The Ground Jury of Martha Hanks-Nicoll (USA,) Marsoe LaRose (CAN), and Nikke Palsson (SWE) rewarded Weber with a score of 38.07, putting him at the top of the leaderboard. A rainy marathon day did not pose an issue for Weber and his team, as they won the marathon phase with the fastest times in five of the seven obstacles on Richard Nicoll’s course. They added 107.85 penalty points to their score to remain in the lead heading into the final phase. In the cones phase, Weber and his team had another winning performance. They knocked a single ball at cone five on Nicoll’s course for 3.00 penalty points to win the championship with a score of 148.92.

“I was really pleased with the team, they worked really well together,” Weber said. “The two I had in the wheel (Boris W and Para) I have driven a lot in the marathon in the wheel, but I haven’t really competed much with them in the cones phase; I was really pleased how they handled everything. Unfortunately I had one down that I think Danzer kicked. He is inexperienced so the way the course was set up with the two cars there and having to drive between them, he was a little not sure what the cars were doing there and lost his concentration and dropped out of the contact. Besides that I was really pleased, it all drove really to plan and pretty straightforward.”

James Fairclough (Newton, N.J.), a veteran of the Four-in-Hand division, started his week off with a fluid dressage test with his mixed team of Warmbloods, putting him in fourth place with a score of 45.54. He climbed to second place following the marathon phase after driving efficiently and having the fastest times in two of the obstacles, collecting 116.00 penalty points. Fairclough and his horses had a strong cones performance, keeping all the balls up, but adding 4.94 time penalties to their score. He collected his 18th Reserve National Champion title with a final score of 166.48.

Allison Stroud (West Grove, Pa.) has mastered driving Four-in-Hand horses after switching from a pony team less than two years ago. She and Willow Star LLC’s Dutch Warmblood team performed a harmonious dressage test on Thursday to receive a score of 45.05. In the marathon phase Stroud struggled at obstacle six, but drove confidently overall on the tough track, adding 126.90 penalty points to her score. She had balls down at nine and 11B for 6.00 penalty points to finish in third place on a score of 177.95.

Misdee Wrigley Miller (Lakewood Ranch, Fla.) also began competing in the Four-in-Hand division less than two years ago, and made a change to her team for this competition, adding a horse she’s had for just two weeks. However, she and her Dutch Warmblood geldings laid down solid performances in all three phases. Wrigley Miller earned a score of 45.44 in the dressage test after executing a lovely test. On marathon day she and her horses easily answered the questions of the course, tallying 135.78 penalty points. Wrigley Miller had balls down following the tricky turns into cones nine and 15 for 6.00 penalty points in the final phase. She finished in fourth place with a final score of 187.22.