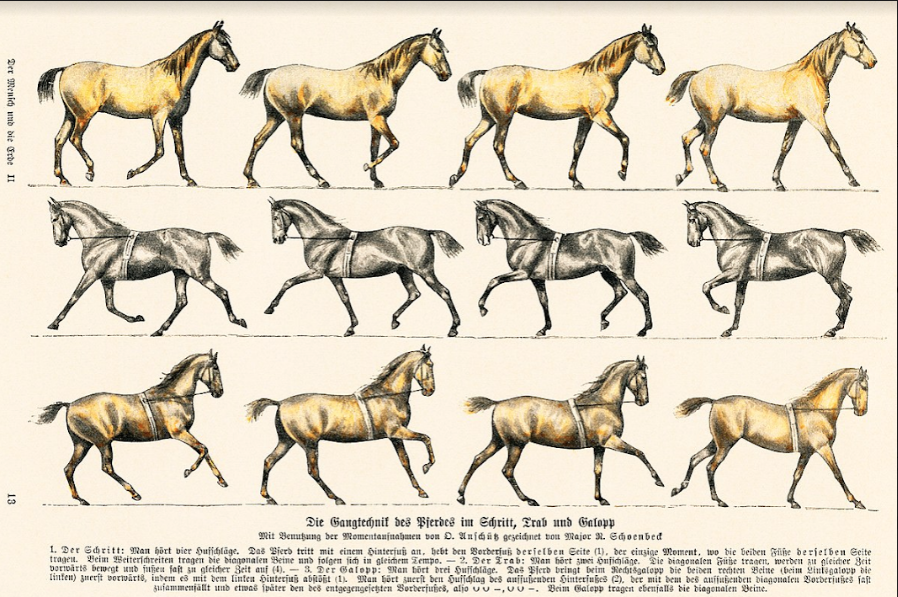 I rode a Paso Fino once.

It was all rather embarrassing if I’m honest, but I wrote a story about it called, My Brief (and Accidental) Career as a Paso Fino Rider, because that’s what I do.

Due to my experience, I began to notice that you’re either a gaited horse rider or a non-gaited horse rider, and never the twain shall meet. There is a vast difference between the gaited and the non-gaited, though they are all horses, but why are some gaited while others aren’t?

I hit the internet in earnest, and, well, I have learned a lot, but not without some difficulty and confusion.

In an effort to simplify things, I’m only referencing the trot.

I thought I would start at the beginning to gain an understanding of the differing gaits certain horses can do. What I learned was not only can they walk, trot, canter and gallop like other horses but they can also surprise you with their natural gift of gaiting, which can be specific to their breed.

You see, non-gaited horses have a two-beat diagonal paired trot (LF, RH and RF, LH) and they would struggle with the concept of a lateral trot (LF, LH and RF, RH), though some can be taught.

We aren’t gaited either, though I’m sure if we tried we could be temporarily. Next time you head out for a walk or a run, try swinging your right arm while moving your right leg and vice versa. It will feel strange, and I can assure you, you will look strange as well. That is because, as with non-gaited horses, we are programmed to walk and run using our limbs diagonally.

Learning the specific gaits can be confusing to understand and equally so to watch. I have a friend with a Paso Fino and she showed me a video of her mare walking, trotting and cantering and I admit, I had to ask which gait I was watching.

“So, that’s the trot?” I asked. “No, that is her walk.” Oh boy, I’m ignorant when it comes to this side of the horse world. And, just when I thought I had a handle on what I was watching, I learned that, as with non-gaited horses, training can alter the gaits with collected and extended variations.

Gaited horses have the ability to trot in diagonal pairs, lateral pairs and also in a four-beat trot where each leg works independently. This ability is known as quadridextrous, exactly the same way humans can be ambidextrous.

To complicate things further there are different styles of gaiting and often individual breeds have their own particular name for each. But as there are only so many gaits, frequently each may have several different names, depending on the breed.

I believe these are most of the gaits horses can do, running walk, pace, stepping pace, Paso Fino, corto, largo, marcha picada, marcha batida, paso llano, sobreandando, tölt, singlefoot, ravaal, flying pace, slow gait, rack and the animated walk. Some of these will of course be duplicates and filed under different names, so some cross-referencing may be in order.

There is a genetic reason why some horses have the ability to gait while others do not, and that is because some are gifted with a gene mutation nicknamed the “gait keeper”. Its real name is the less fun, DMRT3.

In mice, the DMRT3 gene plays a role in the development of limb movement coordination, which makes sense if we think about Paso Finos and their ability to have both a two-beat and four-beat trot.

The origin of ambling horses, in the journal Current Biology, was a study done in the early 2000s where over 4000 horses from 141 different breeds were tested for the DMRT3 gene. The study proved that this gene can be found throughout the world, but the scientists were able to trace the origin of the gene back to England, well Medieval England.

The remains of two gaited horses were found in York and both carried the DMRT3 mutation, and they were dated to have been alive sometime between 850-900AD.

Icelandic horses also carry this variant and when scientists found the remains of 13 horses dating back to the 9th-11th century, they found that 10 of the 13 carried the “gait keeper”. And since the Vikings had a penchant for raiding parts of England, most notably the Northeastern region, which is where, coincidentally, York is located, it is believed that they took a few horses home for themselves.

So, the origin of the gene is England, and because of the Vikings, the “gait keeper” found its way to Iceland before eventually spreading throughout Europe, Asia, the Middle East and eventually to the Americas.

Though that list is long, I have no doubt I have missed a few.

The Decline of the Gaited

Another unique feature of gaited horses is their innate ability to trot at high speeds, which means they are less likely to break into a canter than their non-gaited counterparts. Gaited horses can also travel longer distances without tiring as easily, and if you add in their smooth movement, it made them the ideal mode of transport many moons ago when travelling from A to B was done on horseback.

However, once the road system, such as it was, improved, the decline of gaited horses began. Better roads meant that horse-drawn carriages became the preferred way to get about and trotting horses, due to their size and strength, were used to pull the heavy carriages rather than the smaller gaited horse.

The cavalry also selected non-gaited horses for use in war because they are quick to transition into a canter or gallop, for reasons that I suspect had something to do with dodging swords and other murderous weaponry. And then the mucky-mucks began to lean toward swifter horses to add excitement to the sport of horse racing and liked the idea of heavier horses being able to carry sizable men over hedges whilst fox hunting.

Though gaited horses haven’t lost their appeal, it does seem that they are more popular in certain areas of North America than in others. And for this, I have no answer.

If you’re ever given the chance to ride a gaited horse, take it. It will be an experience like no other.