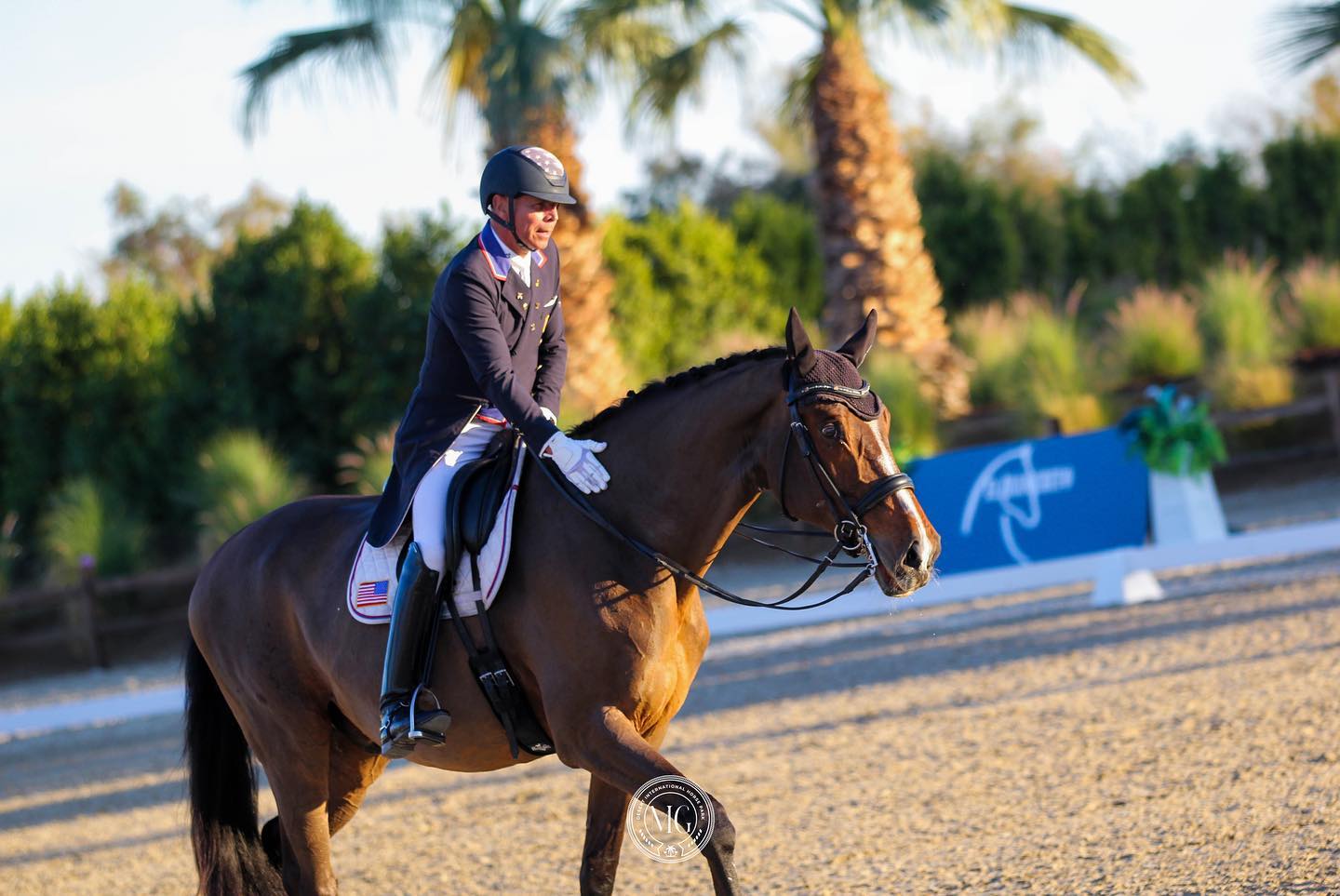 Two-time Olympic medalist Steffen Peters (USA) kicked off the 2023 season at Desert International Horse Park the same way he ended it in 2022—winning.

Aboard his Tokyo Games mount, Suppenkasper (aka Mopsie), Peters swept the three west coast FEI World Cup qualifiers to officially book their ticket to the Final in Omaha, NE this April.

Eighteen competitors from around the globe will earn a coveted spot at the annual individual championship. Peters has made no secret of his desire to compete in one more World Cup Final in front of a home crowd—and for good reason. In his five previous World Cup Final appearances, he’s had the most success on American soil, winning in 2009 with Ravel and taking the bronze medal in 2007 with Floriano. Both those Finals were in Las Vegas, NV.

We caught up with the American Olympian to talk about his latest win with the 15-year-old KWPN gelding in Thermal, CA and ended up discussing meditation, the ego and remote-controlled gliders.

(This interview has been edited for print.)

Carley Sparks: Congratulations on yet another win with Mopsie. You have a phenomenal record with this horse: 51 wins in 72 FEI appearances together.

Sparks: 51, including Friday’s. I counted.

Peters: Oh, I didn’t know that.

Sparks: It’s a spectacular stat. Can you talk a bit about your consistency with Mopsie? Have you had a horse in the past that has been as consistent?

Peters: I honestly didn’t know that [statistic]. So that’s very exciting. I know Ravel got some higher marks than Mopsie, but Ravel had a bit of a shorter career than Mopsie. To ride a horse that’s so supple and so willing to do it every single time, it’s huge.

And at 15 years old, this is so incredible. I just feel very, very grateful and honored to ride a horse like this.

I always like to quote my friend Monty Roberts. It’s so important that we have fun as riders, but much, much more important that the horses have fun. And I really felt like Mopsie had fun [last night].

Sparks: You’ve accomplished so much in your career. Do you think that you’ve approached your training with Mopsie differently at this stage than you would have maybe with Ravel or Legolas or one of your earlier top horses?

With Ravel and Legolas and even with Floriano, I had to practice all the movements a bit more. Mopsie [is ridden] about four times a week with a walk day on Wednesday. And again, we only do the extensions at the shows, so we’ll continue with this program and keep wrapping him in cotton.

Sparks: That’s really interesting. In show jumping, riders often talk about the horses having a limited number of jumps, so you don’t want to waste your jumps. It’s kind of a similar approach, you’re saving the movements for the show ring.

Sparks: I wanted to turn back the clock for a minute. What first attracted you to Mopsie when you tried him in 2017?

Peters: First of all, his size. He’s 18.2 hands tall. And I was absolutely fascinated that he rides like a 16 hand, 16.2, 16.3 hand horse. He’s so supple, in such good carriage and the overall ride-ability, his willingness to move forward, the willingness to carry himself—that was clearly the most attraction.

Sparks: How did he get the name Mopsie?

Peters: It’s an interesting story because he was obviously owned and shown by my friend Helen Langehanenberg [in Europe] and one season, I think when he was five or six years old, he was in the paddock for a week and his grass belly grew so much that they couldn’t find a girth that fit him anymore afterwards. And the word “mops” is for a rather heavy looking individual.

Sparks: That’s amazing. What would be the English translation be then, like chubby?

Sparks: I’m sure this is true with every sport, but equestrians have such a long career and you obviously never stop trying to improve. I was curious, what is Steffen Peters working on personally right now?

Peters: You know what I’m absolutely fascinated with is the mental aspect of the sport. And what I learned and had to learn over the last four or five years is so incredible. How much the focus, the relaxation, the meditation, how extremely important all of this is. And I’m, of course, not even close to learning everything.

Over the years, I’ve always been very good about taking care of my body, but I didn’t take very good care of my mind. And again, that has improved drastically in the last four years. And it is a really, really interesting journey. I think the biggest lesson was that if I do my very best to train Mopsie and do my very best to prepare Mopsie for a show and compete at my very best, then no matter what, I have to be okay with the outcome.

Before, even four years ago, if things didn’t go that well, it was always the end of the world. And if my very best is now not the best each day, that is perfectly fine. I can only do my best and I’m very, very happy that I finally learned this.

And also letting go of the inner ego, my conscious ego did let go for a long time. But that inner competitive ego that narrowed my world so much and it’s, of course, a process to let go of that. And I’m chipping away on that every single day and every single show.

Sparks. That is so interesting. When you say “narrowed my world,” what does that mean?

Peters Yeah, good question. Because my entire world was designed around competition. You know, that was everything—seven days a week, clinics on the weekends. And when I didn’t feel good enough or I couldn’t train, it was always such a huge deal.

On one side you could say, well, maybe that makes you a little bit better. But it was a little too much. And, of course, then the disappointment when we didn’t do well was such a huge negative emotion, such a huge negative deal, and [now] that part is completely gone. So I completely opened up my world and said [to myself], listen, there’s so much more to this life than just competing.

Again, that was a really, really big process. And like I said, I’m still working on this.

Peters: I talked to a sports psychologist and the very first thing that he said was, “Look, Steffen, if the Olympic Games, the World Equestrian Games and the World Cup is everything, you’re screwed.” That’s what he told me!

And [now], I get such a kick out of teaching anybody who wants to learn. I’m enjoying my hobbies besides riding and I keep a very open mind and an even more open heart.

Sparks: That was so well put. What are your hobbies outside of the sport?

Peters: I fly large, remote-controlled gliders. My biggest one has a ten meter wingspan, so a 30 foot wingspan. And when it finds a thermal, it can fly up to two and a half, three hours. We look for birds that circle in warm air. And it is a very, very relaxing, peaceful hobby.

Sparks: I was not expecting that! That’s a really cool and unique hobby to have.

Peters: Yeah, basically anything with wings I’m completely fascinated with.

Sparks: Do you meditate daily now? Is that part of your daily practice?

Peters: Every morning I usually wake up at 5:30 and until about 6:15 I meditate. At six, 6:15, I jump into the freezing pool for 30 seconds and then I hit the gym and swim 500, 700 or 1,000 meters, depending on the day. And even swimming, you know, this rhythmical breathing, I consider that a very meditative state.

Sparks: I can see that. Yeah, that’s an intense morning routine, Steffen.

Peters: It was an absolute necessity. And I’m glad I learned all this and read so many books about mental health. It’s just fascinating.

Sparks: Do you find, after doing all of that, that you take more joy in riding now and in the training and competition?

Peters: Now that you mention it, yes, absolutely. [On Friday], I was very relaxed coming into the arena or as relaxed as you can be. And yes, there’s absolutely no doubt I’m enjoying it more.

Sparks: Amazing. You’re always such a delight to talk to. Is there anything that I missed that you want to add?

Peters: You know, just a huge thank you to my team with Akiko [Yamazaki], Mopsie’s and my sponsor. And of course, my wife Shannon, who’s helped me so much on the ground with Mopsie and also for being my rock. And of course, Eddie [Garcia] and Tom [Meyers], who take care of Mopsie and my friend Dr. Rodrigo Vazquez, who’s been taking care of Mopsie since he came to the United States.