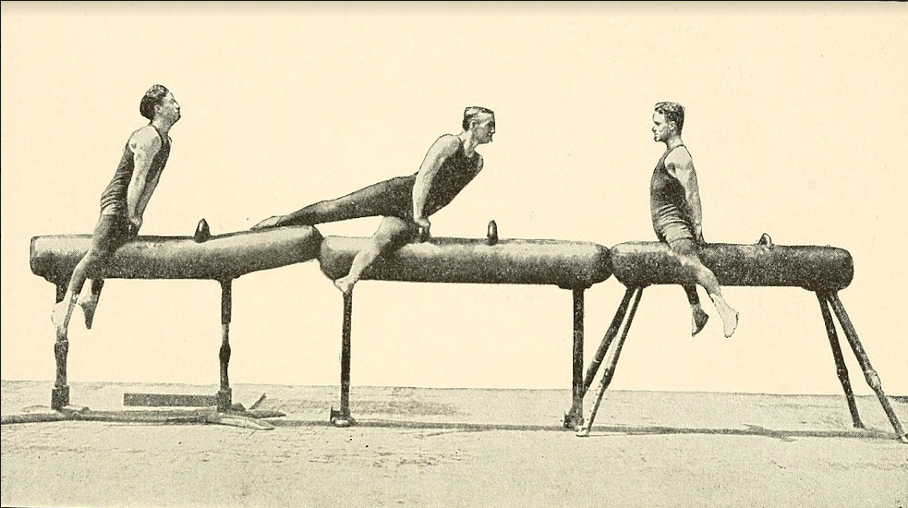 I have referred to my long list of topic ideas before. I’m constantly adding to and reviewing said list for inspiration.

I’ve consistently passed over two items, pommel horse and sawhorse, assuming they weren’t all that interesting. I ought to know better than to trust my judgment. I have proven to myself, repeatedly, that my assumptions and intuition are largely wrong.

Turns out they have some fascinating origins.

Even though pommel horse has been on my list for over a year, it took coming across the above photo to spur me into action. The image made me laugh and if I wanted to share my delight with you then I was going to have to write about it.

First, we’ll tackle the horse part of the apparatus, though it’s fairly obvious. It has four legs and sits a decent distance from the ground and we can safely surmise this is where the horse part comes in. Though, another person may have gone with the word cow or moose.

However, there is a good reason why this structure was never called a pommel cow or pommel moose. Way back in 315 BC (ish) Alexander the Great created a wooden horse-like arrangement for his Macedonian soldiers to practice mounting and dismounting. Using a fake horse relieved an actual horse from having to deal with what I’m sure would have proved an annoying exercise. This contraption proved popular enough that the Roman Army, a little time later, followed the Great’s practice and so it continued until the modern-day Olympics.

We all know a pommel is the raised part of the front of a saddle, so I shan’t go on about that any further. But I’ve unearthed three other pommels that I didn’t know about until now. You know that round bit at the end of a sword or dagger beyond the hilt, that’s a pommel. A decorative or ornamental knob, and who doesn’t love one of those, is also a pommel. And those handles on the pommel horse are also pommels. So, we are surrounded by pommels, not only in this paragraph but also in life. I used the word seven times, to save you from counting.

Not surprisingly the word comes from Old French pomel, which comes from Medieval Latin pomellum and the short form in Latin is pomum meaning apple. Roundness is the link here. And we all remember from our high school French that apple is… pomme.

Another mystery well and truly solved, thank you very much.

You will have to bear with me here and trust that I have a point. Sometimes these things get convoluted but are so interesting that I willingly wander into the weeds with excitement and determination to bring you this information.

It all started with the word sawhorse, though it seems clear to me why we call it that. However, and this is where things took an interesting turn, under the bland explanation of sawhorse on etymonline.com was the word easel. I don’t really care much about easels, as it happens, but read on despite my indifference. The word came to us via Dutch ezel, Middle Dutch esel which, somehow, stemmed from Latin asinus. And asinus means ass as in a donkey, which is to say, like that of a donkey who carries and holds stuff for us, much like an easel.

I admit the link between the two appears tenuous, so to bolster your confidence I present you with the German word for donkey, esel.

We’re in the weeds now.

The final part of the easel definition said, “compare sawhorse, French chevalet, Italian cavalletto”. Having already reviewed sawhorse only moments earlier, I didn’t bother going back a second time. Chevalet, means easel and apparently sawhorse in French, which is pretty darn close to cheval, which all horse people know is horse.

It’s the Italian cavalletto that had me so excited. I’ve had cavalletti on my list of ideas for some time and I think I can strike a line through it, finally. If I turn to Google Translate and type in sawhorse or easel it tells me the Italian equivalent is cavalletto.

Cavalletta, which I tripped upon, means, of all things, grasshopper.

It took me an embarrassingly long time to figure out that cavalletti is the plural of cavalletto, meaning of course easels. Oi vey! I wish I spoke more than one language. Nevertheless, I feel I can ease my reddened face with the excuse that a cavalletti to us is singular because it is just one thing.

But once I put on my thinking cap, I realized a cavalletti is comprised of two Xs or dare I say easels, with a pole fixed between the two creating a handy little jump. If we give it a push with our foot, because why bend down when we don’t have to, we can change the height four times. The X’s are always small, ergo the jump is always small which means a grasshopper would have no issues clearing it.

And there you have it, the interesting life and times of the pommel horse, sawhorse, easel and our dear friend the cavalletti. Plural.