A Horse by Any Other Name

Home > Blog > Learn > A Horse by Any Other Name 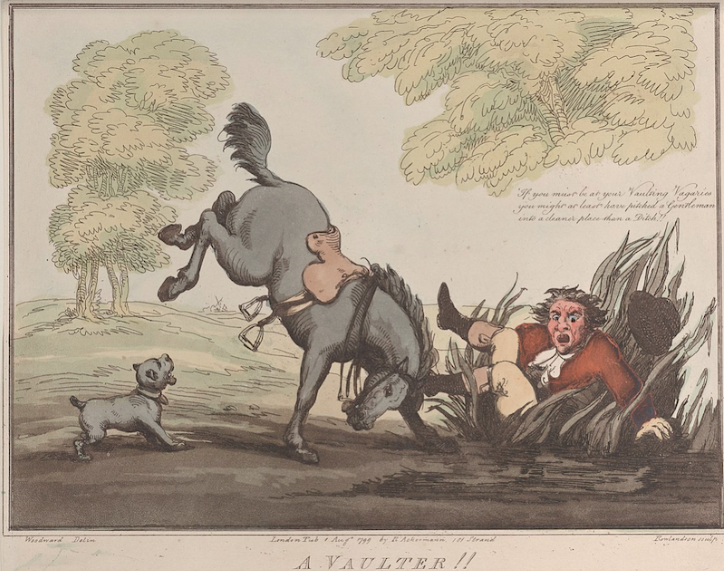 I’ve done the etymology on all sorts of words but never the most obvious word of all, which is horse. So, we will start there.

Well, that was my plan but my favourite go-to source for this sort of thing gave me so much more, ‘tis the season after all. And as with all good journalists, I pivoted in the direction the story wanted to take me. I typed the word horse into etymoline.com and 42 pages of words came up relating to horses. Admittedly, not all the words are useful for this post, but many were. Here are a select few.

We all know what a horse is, so I won’t bog things down with a definition.

Turns out the history behind this word is boring, but such is life. From Old English, hors; from Proto-Germanic, harss; from Old Norse, hross; Old Frisian and Old Saxon hors. You get the idea. The list goes on and on and it seems to me as long as there is an H, R and an S we somehow get the word horse. That works for me.

A large swift horse. This noun was used most frequently in the 1300’s and has, for reasons unknown, fallen out of favour. It comes from Old French corsier meaning fast horse, charging…

Not that long ago I wrote a post about Pony Horses and brought you the word courser. Well, I’m bringing it back for two reasons. Firstly, it’s a great word, and we need to use it more. Secondly, turns out we use it every Christmas Eve when someone cracks open ‘Twas the Night Before Christmas. We actually say it twice, though in reference to reindeer rather than horses.

“More rapid than eagles his coursers they came,

And he whistled, and shouted, and called them by name…”

“So up to the housetop the coursers they flew,

With the sleigh full of toys, and St. Nicholas too.”

So, we are familiar with the word, we use it once a year and yet forget about it once the book is closed. Let’s stop doing that and start using it on the daily.

I bring you this word simply to keep on theme. This was a slang word in the 1800’s used by thieves’, of all people, for a horse, because they prance and stuff. Noted.

A stepper is a horse with a showy gait and in the 1800’s you might have heard someone say, “Wow, he’s a stepper, isn’t he?” We should bring this word back as well. “That courser of yours is sure a stepper.” Just one example of how we might use it.

In the 1200’s a palfrey was considered an ordinary horse for riding, which is to say not a warhorse. A palfrey was a small, finely boned horse most suitable for a lady to ride. You know because we ladies are so delicate and incapable of handling a courser. I like this word but am disappointed with the meaning so perhaps we should leave it in the past. Good grief.

This was a common name for a work or farm horse somewhere between the 1300’s and the 1500’s. Some think that the word dobbin comes from the proper noun of Robin and somehow shape-shifted into dobbin. Words are such mysterious and wondrous things.

A hobby was a small active horse of the 1400’s. Hobby is a variation of the word hobyn, which sounds very much like dobbin. Will still use this word today but always in the form of hobbyhorse, which is a toy horse for a child made of wood and apparently at some point in time, whicker.

I’m not making this up, I promise. A bidet, at least in the 1600’s, was a small horse. It derives from the French meaning a small horse or pony. Needless to say, we use this word a little differently today and that started in the latter half of the 1700’s to mean a vessel in which to bestride for bathing purposes.

I’m veering ever so slightly off-topic here because this 14th-century word, like many others, is great.

If we bestride a horse there is always a chance, we could become unhorsed, which is to say fall off. It stands to reason that the opposite of unhorse, is of course, horse. “I’ve been unhorsed,” I suppose you might say if you get bucked off. “Get horsed,” your trainer may yell as a form of encouragement for you to get you back on. I may have to work on how to use horse as a verb.

This word isn’t as old as the others as it comes from the 1800’s and it’s still common enough in my house. Though I don’t know how it fairs in yours.

“I took a spill today while riding. Yup, I became unhorsed. That darn stepper of a courser, he really is a cheek. Maybe I need a palfrey since I’m such a fine, gentle lady. Perhaps I should play it safe and bestride a bidet or even a dobbin.”

There you have it. A short list of interchangeable words you can use around the barn. My thesaurus should take note.