Peters Finds Oasis in the Desert: the Road to Omaha

Home > Blog > Dressage > Peters Finds Oasis in the Desert: the Road to Omaha 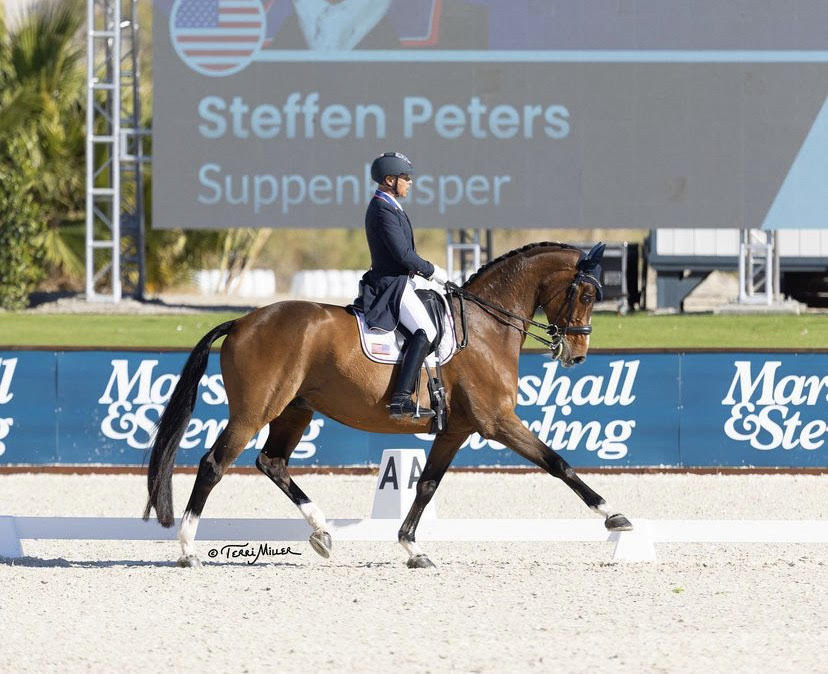 Olympic silver medalist Steffen Peters (USA) and his longtime partner Suppenkasper haven’t been down the center line together since the FEI ECCO Dressage World Championships in Herning, Denmark this past August.

It was a much deserved break after contesting the 2020 Tokyo Olympics, CDIO5* Nations Cup in Aachen and then the ECCO World Championships. But it might have felt a little bit like a horse show drought for the 14-year-old KWPN gelding with an enthusiasm for showing.

For most, starting back from a three month break with a World Cup Qualifier is ambitious if you’re expecting a top result. For Peters and Suppenkasper, it was the first step toward qualifying for the Finals in Omaha. The veteran pair clinched the win with a score 73.652%.

Not a bad start, Peters agrees, noting that they are in better form than ever.

“Today I actually had a nicer feeling. He was better in the bridle, he had a bit more energy, and I think it could have been a better score than in Denmark, but unfortunately the fumble on the center line didn’t help. But overall the feeling was great today and that is a nice feeling to start the show season with,” said Peters.

The “fumble” on the center line was a little added flare from Suppenkasper, who was all too eager to be under saddle for Friday’s Grand Prix and added some extra tempis. Peters is familiar with the instincts of talented, top level horses and he appreciates Suppenkasper’s moment to passion every now and then.

“He still gets very excited at a horse show. After all those years of showing him, I’ve never had one test where I had to push him. He offers so much,” said Peters.

“In fact today, he offered so much he thought he was in the Grand Prix Special and added a few one tempis on the center line, which cost us at least two percent today. He tried to do the right thing and I cannot hold it against him.”

Conversely, Suppenkasper’s personality in the stable is quite easygoing, yet also a sign of the sincerity of his bond with Peters and the team.

“He’s such a kind soul. He is a big teddybear in the stall. He follows you. You don’t have to put a halter on,” said Peters.

Peters doesn’t have long to revel in this win, because the goal going forward is clear; rising to the top and securing a ticket to the Finals in Omaha.

“It’s not going to be easy this year,” he reflected on that goal. “We’re looking at three CDIs and hopefully we can top the leaderboard on the West Coast and get a spot for Omaha.”