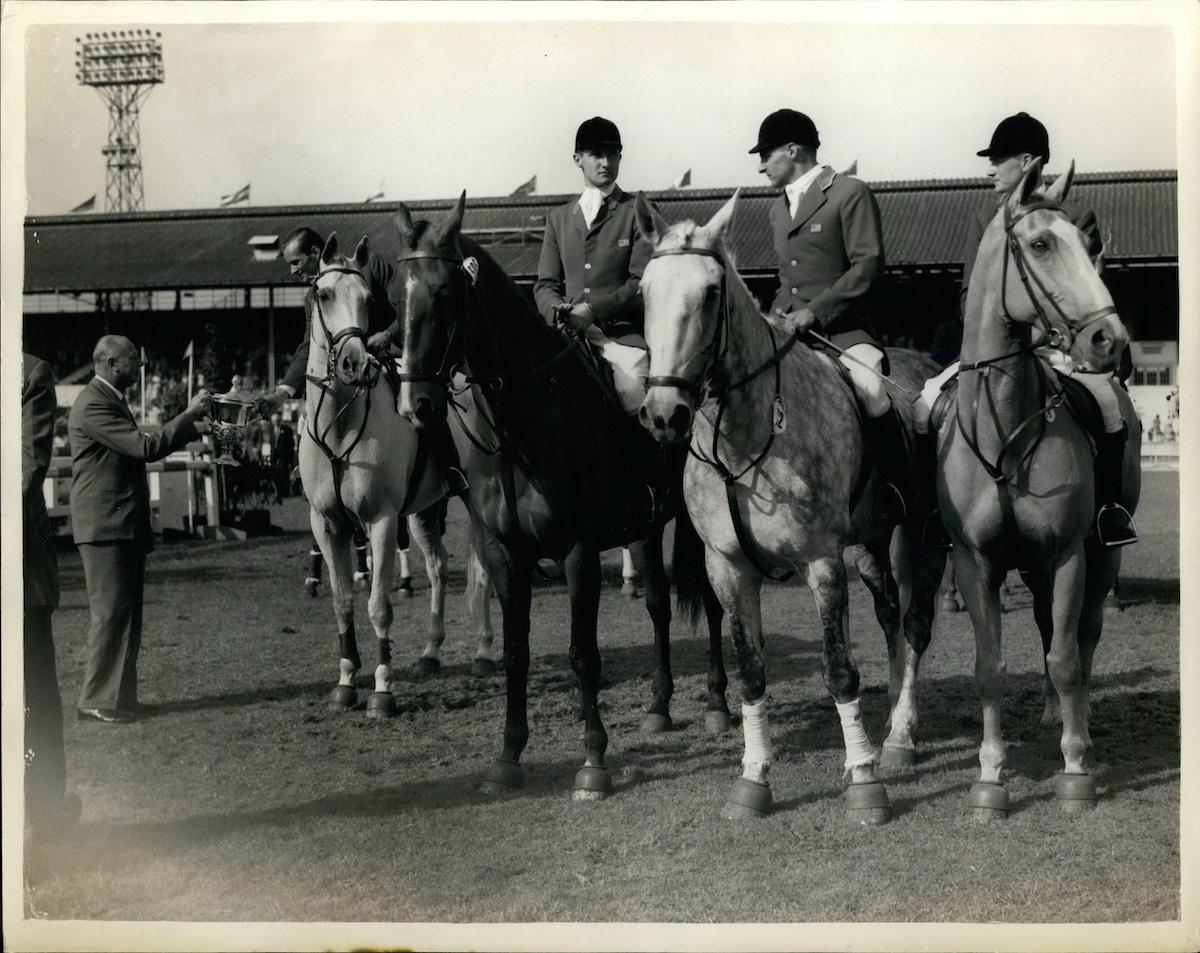 Each week on #HallOfFameThursday, Horse Network recognizes members of the Show Jumping Hall of Fame with an inductee’s plaque and historical photos. This week’s featured inductee is Nautical, Class of 2012.

Nautical is one of the most recognizable horses in show jumping history and not just for his bright palomino color.

Ridden successfully throughout the late 1950s by Hugh Wiley, Nautical was the subject of the 1960 Disney movie, “The Horse with the Flying Tail.” The movie, named for Nautical’s characteristic tail expressions as he approached jumps, was the story of his journey from cow pony to eventually becoming one of the United States show jumping team’s biggest assets.

Ridden with the name Injun Joe by Hall of Famers Pat Dixon, Joe Green and Cappy Smith, the difficult horse was renamed Nautical by Wiley when he was home on leave from the U.S. Navy. The pair’s relationship began in 1955 when the horse was 11 as Wiley searched for a mount for his first USET European tour. Nautical already possessed an incredible jumping style and a few years of refined training under USET chef d’equipe Bert de Nemethy led to the development of a brave and trustworthy horse that would excel in the national and international show ring.

Just one year into the new relationship, while training for the 1956 Olympic Games, Nautical was placed on rest for the remainder of the year due to unsoundness in his left front hoof. Following this time off, Nautical entered back into competition and put together an impressive record.

From 1956 to 1960, Wiley piloted Nautical on seven winning Nations’ Cups teams in North America and Europe including wins at Toronto, New York, London, Rome and Lucerne. The pair’s clear round clinched a Nations’ Cup victory in Rome in 1960 in a prelude to that summer’s Olympic Games.

Competing on the North American circuit, Nautical won the West Point Trophy and the Stone Trophy at the National Horse Show in New York two years in a row (1957-1958). Nautical and Wiley also won multiple classes at CSIOs in Harrisburg and Washington, as well as the Puissance in Toronto.

In 1958 and 1959, Nautical racked up several wins in London, including in the Foxhunter Stake, Manifesto Stake, Horse and Hound Cup, and the Daily Mail Cup, as well as one of his most memorable victories, the 1959 King George V Gold Cup. He also won the Puissance at Dublin and placed 6th in the European Championships twice—in 1958 at Aachen and 1959 at Paris.

The latter end of Nautical’s career was highlighted by his turning in the best individual score at the 1959 Pan American Games in Chicago where he helped lead the U.S. to the team Gold Medal (however, no individual medals were awarded). Nautical developed pneumonia on a flight to Germany, which caused him to miss the competition at the 1960 Rome Olympic Games. Following the Games, the decision was made to retire Nautical.

At the age of 17, Nautical was officially retired in a ceremony at the National Horse Show at Madison Square Garden. Nautical lived six more years before passing away from natural causes while living on Wiley’s farm in Maryland.

The Show Jumping Hall of Fame is a 501(c)3 not-for-profit charity that relies solely on contributions to operate. If you liked this story, please consider supporting its efforts to preserve our sport’s history. Donations can be made online at www.ShowJumpingHallofFame.org.

Feature image: Duke of Gloucester presents the Prince of Wales Cup to the winning USA team, during the International Horse Show at the White City. (L to R): G. Morris on Night Owl, F. Chapot on Tally Ho and H. Wiley on Nautical, Steinkraus is on Rivera Wonder