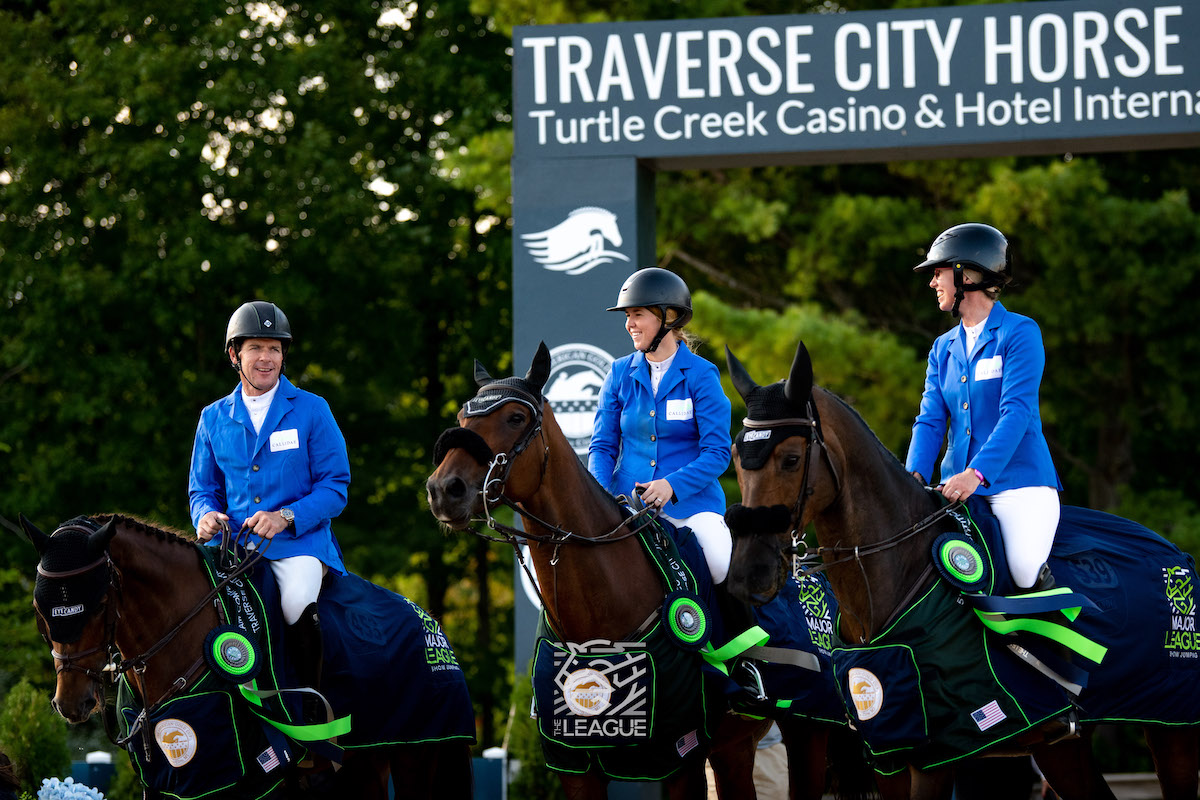 After last season’s dominating performance on the Major League Show Jumping (MLSJ) tour and with four of the original dream team returning in 2022, Eye Candy landing atop a podium seemed inevitable.

But it’s been a slow start for MLSJ’s sweetheart team this season.

Eye Candy lost the bronze medal match to the Trailblazers at the season opener, MLSJ Vancouver, and twice have narrowly missed out on qualifying for the second round with fifth place finishes in Traverse City and Ottawa in August. The team broke their podium dry spell at MLSJ Toronto, finishing third at the third stage of the season. MLSJ Traverse City 2 marks their first win of the season.

“We’ve been a little unlucky,” said Eye Candy’s Conor Swail. “We were just knocked out the last time [here in Traverse City] by a very small margin, and it was the same in Ottawa. So we have had a couple of fifths that could have been turned into good podium [finishes]. We’re having a little tougher time. But it’s nice that we bounced back today.”

Here’s how the MLSJ Team Event went down in Traverse.

Northern Lights and the Unlucky Eights

First in the ring, ShowPlus Northern Lights started strong, posting a four fault team score with clear rounds from Juan Ortiz (Vintage) and Vanessa Mannis (Catinka 25) and a single rail from Sean Jobin (Coquelicot vh Heuvelland Z). Alas, their comparatively slow time of 219.12 pushed them just below the cut line and out of medal contention.

DIHP Roadrunners and Spy Coast Spies met a similar fate, collecting eight faults apiece. Kyle King and Etalon and Alberto Michan with Bugatti each picked up a rail in the first round for the Roadrunners. Teammate and resident speed demon Kristen Vanderveen posted the fastest first round time of the day of 61.02 seconds with Bull Run’s Prince of Peace to top the individual standings and put the team into sixth overall with a total of 198.56.

Spy Coast Spies have been knocking at the door this season with three second place finishes in five legs (MLSJ Vancouver, Traverse City and Ottawa). But they’re still waiting for that door to open. Margie Engle and Dicas and Shane Sweetnam aboard Birdy du Thot brought home clears, but an eight fault performance by Tanner Korotkin and Quinn 33 kept them out of the second round. The team’s slightly slower team time of 201.75 relegated the Spies to seventh.

Any given round in show jumping can see a rider go from hero to zero. Such was the case for Team Lugano. The winners of MLSJ Ottawa ended in last place at MLSJ Traverse City after an unfortunate 28 fault first round score from Vanessa Hood and Cascalretto. The team was also represented by Carlie Fairty and Elite-Chin de Saulieu, who posted their only clear of the day, and Hilary McNerney and Lovelight, who collected a single rail to end on four.

Round two shakes things up

If rails were few and far between in Round One, Round Two was another story. Helios, Eye Candy, Trailblazers and Crusaders battled for a spot in the gold medal match.

Helios sent in their speediest pairs for the faults converted round with Ashlee Bond and Donatello 141 and Mark Bluman and Marilyn. Bond caught a rail at the penultimate fence to add three seconds the clock. Bluman caught a rail at the last, putting Helios on a score of 88.55. In the end, it was three tenths of a second short and the team standings leader were relegated to the bronze medal match against the Crusaders.

Trailblazers’ Daniel Bluman posted the fastest time jump off time of the day with Cachemire de Braize, speeding through the timers in 40.74 seconds. A pair of rails at fences 8b and 9 from Santiago Lambre added six seconds to the clock for a team total of 88.18. It was just enough to earn them a spot in the gold medal match against Eye Candy.

Helios, this season’s leading team has three times captured victory on MLSJ tour in 2022. The winners of the stage two at Traverse City missed the mark at MLSJ Traverse City 2, however. Riding against Crusaders’ Beezie Madden and Hummer Z, Helios’s Karl Cook and Fecybelle had the faster time in the bronze medal match but faulted at the b element of the double to add three seconds to the clock. Helios finished on 46.72 to Crusaders 45.89 to miss the podium.

Eye Candy switches up the lineup

Eye Candy had a predictable MO in season one. Amy Millar went first in the order. Jacqueline Steffens, second. And an Irishman, in Paul O’Shea or Conor Swail, rode as anchor. Then it was rinse and repeat in Rounds Two and Three.

At MLSJ Traverse City, they switched up the order for the jump off rounds, tapping Millar to ride anchor for the first time. It’s a position she’s been taking on with increasing consistency for the Canadian team. But she’s hasn’t entirely embraced it for MLSJ just yet.

“It was very stressful for me, just so you know. I usually go first on this team,” laughed Millar.

“Yes, I’ve been [riding anchor] for Canada a lot. But what I explained to Paul [O’Shea] is I don’t have to go fast in in the Nations Cup. So it’s the going fast in the last round that was making me nervous, but it worked out today.”

Millar posted the fastest time of the day for Eye Candy, stopping the clock in 43.06 seconds to seal the win. Steffens and Swail were 43.37 and 44.97, respectively.

Eye Candy moves up the leaderboard

Eye Candy now sits in second on the team standings with 29 points. Last season’s champions still have ground to make up if they hope to catch Helios (37 points) in the second half of the season, however.

“I hope we’re picking up pace now. I think we’ve been getting consistent. And, you know, it’s just a little different than last year. I do think it’s a little more competitive. I think the standards have been raised and that’s great to see. But, it means we just had to catch up a little bit as well,” said Steffens.

Eye Candy will look to keep the momentum up in San Miguel de Allende next month. But Millar won’t be along for the ride.

“I’ve had a really amazing summer, but I’ve done more traveling and more showing and more everything than I have probably in my whole career,” she explained. “And it is time for a little break, which I’m going to have right after this [week], because my horses and I need a little rest.”

MLSJ heads to Mexico for the next three stages of the season, stopping first at San Miguel de Allende, October 20–23 before heading to Monterrey for two weeks in November.