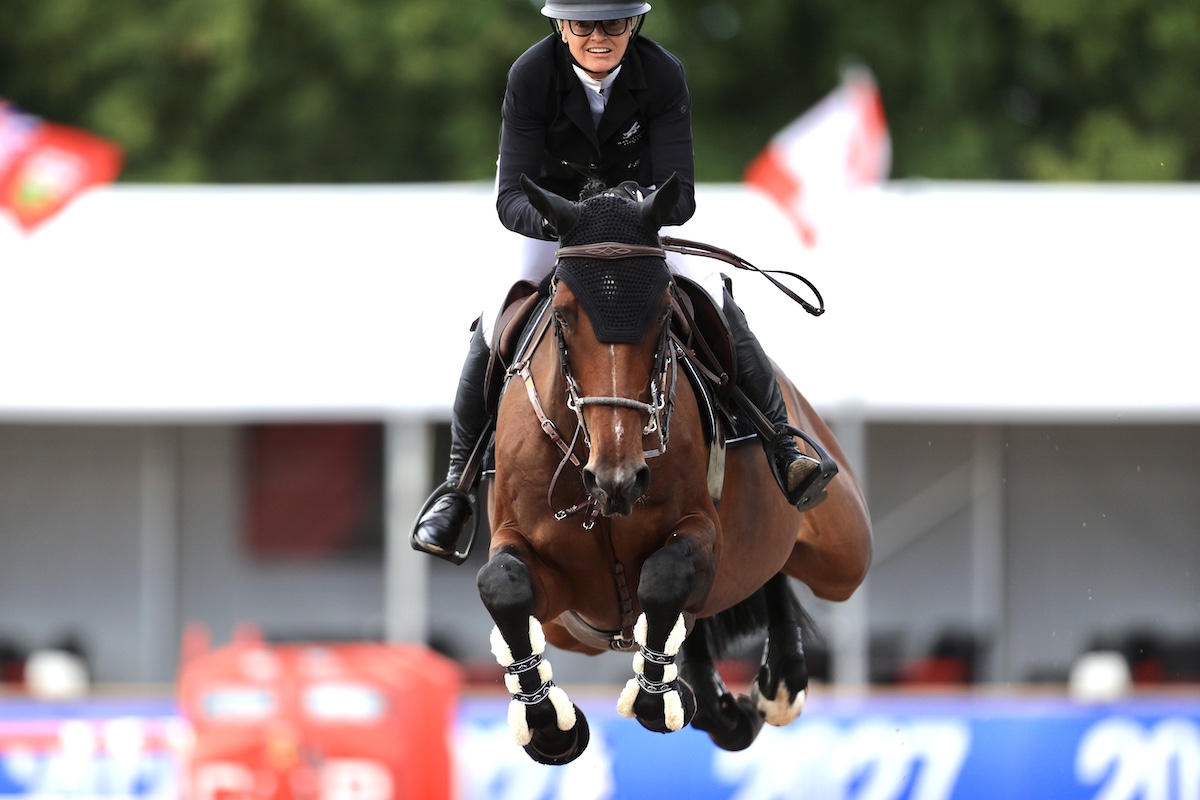 The wee hours of the morning are reserved for night owls, overnight workers, and, apparently, Canadian show jumper Erynn Ballard.

“I’ve just been getting up really early,” says Ballard, who likes to take her time in the mornings, working out and getting ready for the busy horse show day ahead. “Night classes might be a little challenging [for me], just based on the fact that I [don’t typically sleep] past 4 a.m.”

It’s not hard to understand why. A ‘full plate’ is an understatement for the professional rider for Ilan Ferder Stables and member of Major League Show Jumping’s Team Lugano, who is currently among the sport’s top-50 riders in the world according to the Longines Rankings.

This month, Ballard is finally back on North American soil after a whirlwind European tour that included stops in Kronenberg, the Netherlands; Rome, Italy; and most recently, the FEI Jumping World Championship in Herning, Denmark. There, Ballard—who competed on Ferder and Esperanza Imports LLC’s 11-year-old KWPN stallion, Gakhir—was joined by teammates Beth Underhill, Tiffany Foster, and Amy Millar.

Fortunately, in Herning, Ballard had her teammates and longtime fellow competitors—who nicknamed themselves ‘the Soldiers’—there by her side to make the going a little easier.

“I feel like the four of us really left our mark on the show jumping world, [finishing 10th] and jumping as a team at night,” says Ballard. “It was a pretty proud moment for us.”

As a rider for one of the sport’s most well-known international sale barns, Ballard sits on a lot of different horses. Just a cursory glimpse at her FEI record, for example, includes more than a dozen mounts campaigned in just the last nine months. But ironically, Ballard’s 2022 World Championship appearance only gave her a greater appreciation for the animals she works alongside every day.

“The jumps [in Herning] weren’t like Spruce Meadows. You didn’t have big, intimidating jumps to jump. You had [these] massive, delicate, light jumps [and a tight] time allowed,” she explains.

“The horses just handled it; you didn’t see too many [that] couldn’t jump the height. More than anything, the technicality and the carefulness caught up [with some pairs], especially on the third night. But the horses are amazing in what we ask them to do, and in what they give us, and [how] they try for us. If you’re going to take anything away from a championship, it’s how good the horses are.”

For his part, Gakhir, known as “Curly” around the stable, has certainly lived up to expectations. The former Ben Maher mount was purchased with the intention of becoming a championship-level horse. Ballard, who has been paired with the stallion since early 2021, is grateful for the more than a year and a half she’s had to develop him—a virtual lifetime in a sale horse barn.

“Riding for a dealing stable like Ilan Ferder has given me all of this opportunity, [and] has provided me three championship [appearances] on three different horses. But what comes with [it is the fact that Ilan’s business is selling]. So, very often, I go from one place to the next with a brand-new group of horses,” Ballard explains.

Case in point: the horse she rode in the MLSJ team event in Toronto two weeks ago, Quilana Denfer, she’d only sat on once prior.

“I have to have the ability to immediately fall in love [with a new horse], because I have to believe that the horse is going to do what I want her to do for me, without that actual relationship that you get with a horse when you spend four months with them.”

Fortunately, the Canadian rider has developed a little trick of the trade for helping along that critical bonding process.

“When I don’t get to ride them every day, and they’re [in the program] for a short period of time, I make sure that I get to know [the horses]. I have a little cluck noise that I make, usually followed by a piece of sugar. So, at least when I walk in, and I make the cluck noise, even if they only want sugar, they’ll look at me, and know who I am.”

For Ballard, having to fast-track her partnerships with the many mounts that come through Ferder’s doors is a justified trade-off given the exciting caliber of horses she gets to work with every day. What’s more, she’s substantially invested in the future of each animal that she sits on.

“The better they [go] for me, the better they can be for somebody else. And Ilan told me right from the very beginning, ‘Don’t worry, Erynn, if we sell one, we will buy two.’ And he stayed pretty true to that,” she explains.

“Once they get sold, I love to follow [their careers]. And all that I hope for is that they have the same amount of success or more success with their new people. [We] want to sell people horses that go on and provide them opportunities. [Wouldn’t it be] amazing if somebody bought a horse from us and it went [on to compete in] a championship? I mean, what better advertising is that?”

After decades of putting the time in, Ballard has learned first-hand how fragile the footing can be at the top of the sport.

“All professional athletes go through [ups and downs],” Ballard says. “I think, with this sport [in particular], one of the most important things is confidence. When you’re winning, it’s very easy to be confident. When you’re losing, it’s very hard to [get] that confidence back, because the mistakes seem worse and bigger.”

According to Ballard, a rider’s mental game needs to be on par with her or his physical ability—and when it comes to the physicality of riding, the bar keeps rising.

“I hate to say that I’m getting old, but now that I’m not 30 anymore, I’m very aware of my core strength and my balance. I find myself more and more working out in different ways off of a horse to make sure I maintain that,” Ballard says.

“Because, with age, I think the thing that you lose first is your balance and maybe your core strength. [There’s] a lot of 25-year-old riders that are very, very good right now. I need to make sure that I keep up and stay equally as [competitive] as they are.”

But physical challenges aren’t just about age. According to Ballard, despite the sport’s oft-touted party line—that equestrian is the only Olympic event where men and women compete against one another as equals—the Longines World Rankings paint a more ambiguous picture.

“The sad thing is, when I was the number-one-ranked female rider in the world, I was [still] 30th in the world,” Ballard says. “It just goes to show you how strongly dominated the sport is by male athletes.”

According to her own informal count, Ballard says, there are less than 20 female athletes currently competing at the championship-level. And, with the exception of Malin Baryard-Johnsson and the gold-medal-winning Swedish team, that discrepancy was on full view among the top-placed countries at the World Championships this summer.

“The Netherlands? No females. Great Britain? No females. Belgium [and] Ireland? No females. So, it is a sport that is dominated by male athletes,” says Ballard, noting that her experience as part of Canada’s all-female “#warrior” squad was even more special due to that fact.

“I like to think that [men and women are] equal in our ability to ride a horse. But, at the end of the day, do we lose a little bit in physical strength when the jumps are that big?” Ballard reflects. “I’m never going to be able to [replicate a man’s strength], no matter how much yoga I do or how many push-ups [or curls].

“I do believe that sometimes, [women] have an advantage in our size and in our ability to be light and soft with the horse. But when the jumps are that big, are we at a disadvantage? I haven’t decided yet.

“I’d like to try [Individual World Champion Henrik von Eckermann’s horse] King Edward,” Ballard jokes. “Then I could tell you!”

King Edward or no, there are plenty of good reasons not to count Erynn Ballard out. If nothing else, plan on her to rise earlier and hold herself to as high a standard as anyone in the business, regardless of age or gender.

“I get up in the morning, and the most important thing for me to do is be competitive in the class [I’m riding in that day]. It’s my job,” Ballard says. “I have to make sure that, nine times out of 10, I rise to the occasion.”

The MLSJ tour next stops at Traverse City for the American Gold Cup, Sept 15–18.