Can Maher Make History? Your Guide to the 2022 Longines Global Champions Tour of New York

Home > Blog > By the Numbers > Can Maher Make History? Your Guide to the 2022 Longines Global Champions Tour of New York 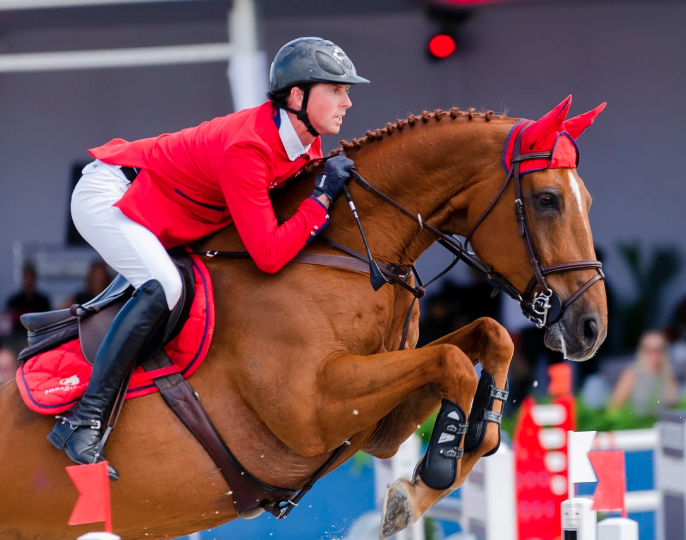 This event, put simply, is unique. There aren’t many top show jumping venues that require boarding a ferry to reach the stables. While an outdoor event, the arena is on the smaller side (The indoor arena at the National Horse Show in Lexington, KY is just five meters narrower). And there is absolutely no lacking of atmosphere (Oh hey there, Statue of Liberty).

The feature event—the CSI5* LGCT Grand Prix of New York—is not run like a typical Grand Prix, either, and riders will certainly be feeling the pressure of the class, as this event is the penultimate leg of the 2022 LGCT series, which rewards a purse of €750,000 for its top performing athletes.

Ahead of a most impactful week, we’re breaking down the ins and outs of the LGCT Grand Prix:

In fact, the first round of the class is held in conjunction with the series’ Global Champions League team competition, held as a Table A Speed competition on Saturday, Sept. 24 at 12:30pm ET.

The top 35 athletes from this competition advance to the Grand Prix, where they receive a clean slate and begin again on a zero-fault score. This second round is formatted like a more traditional jump-off class, except the start order is determined by the results of the qualifier.

Any riders that finish on equal-leading faults of this class then advance to a jump-off to determine the winner.

A game of points

There’s more on the line here, as the LGCT Grand Prix awards points to its top-performing athletes, which determine the year-end bonuses (The winner of the Grand Prix also receives an automatic berth into the LGCT Super Grand Prix in November in Prague). Currently, Christian Ahlmann (GER) leads the standings with 238 points, but Ben Maher (GBR, 232 points), Pieter Devos (BEL, 221) and Darragh Kenny (IRL, 198) are all hot on his heels.

Here’s how it works:

Ahlmann will not be in New York, meaning the lead is more than up for grabs. What do the riders behind him need to do to take over the series lead?

Maher could become the first rider in LGCT history to claim the series title on three separate occasions, having prevailed in both 2018 and 2019 thanks to his incredible Olympic gold medal-winning partner, Explosion W. Only one rider boasts more LGCT career prize money than Maher, and that’s Edwina Tops-Alexander (AUS), who like Maher has also claimed the series tittle on two occasions (2011-2012).

Maher needs to finish 23rd or better in the Grand Prix to overtake the lead before the series finale in Riyadh, Saudi Arabia (Maher is only 8 points behind Ahlmann, but only one’s best eight results from the season count toward the series standings).

If Maher was to win in New York, he would have 259 points, putting the pressure on Ahlmann for a top 10 finish in Riyadh.

After Explosion suffered a minor injury before the World Championships, Faltic HB has stepped up to be a top horse in his own right, recently finishing second in the LGCT Grand Prix of Rome. Faltic HB is averaging just 2.3 faults in LGCT competition this year, along with a finish position within the top 12.

Let’s talk about how unbelievably balanced this horse is: He has an equal percentage of faults off the left and right leads. Wow!

Devos took the LGCT Grand Prix win in London this season and is currently averaging just 3.4 faults in LGCT competition this year.

Mom’s Toupie de la Roque has made the most LGCT starts of Devos’ horses this year (15), and the 15-year-old mare is also putting up the best averages. She is averaging 1.6 faults in LGCT competition in 2022; her average finish position is 17.

This mare has a noticeable weakness: Her rails almost always come behind (90% of faults in 2022, according to Prixview Next Gen data). This pair will need to deftly handle combinations 40% faults) off the right lead (60% faults) to put themselves in contention for a top accolade.

With 198 points, Kenny sits well behind Maher, Devos and Ahlmann in the standings, and it would take a win plus Devos and Maher to not qualify for the Grand Prix in order to be in contention for the title. Still, he’s had a consistent year on the tour and has ridden VDL Cartello in his last two LGCT Grand Prix outings.

The eye-catching grey stallion is averaging 3 faults in LGCT competition this year. Cartello’s area of greatest weakness this year has been jumping into combinations. He has faults at 31.13% of the combinations he’s faced in 2022. More than 54% of the time, the faults have come at the “A” element.

Kenny should look to break into the top three in the standings should he be able to secure a top finish in New York. The difference between third and fourth in the overall standings is nearly €38,000.

Make your selections for all of the CSI5* events at the Longines Global Champions Tour of New York at Prixview.com/fantasy.