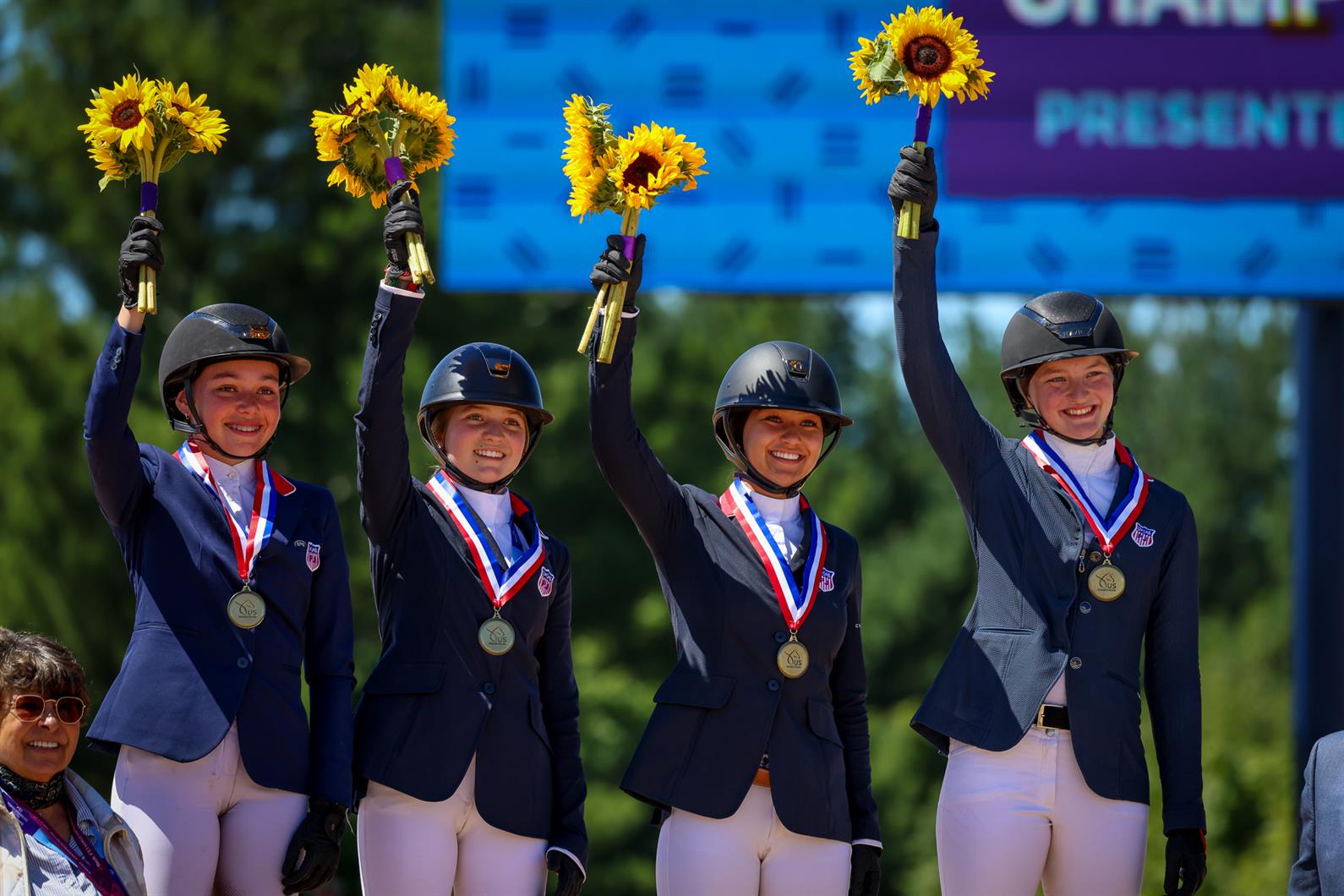 Only a quarter point (aka one rail) separated the Gold medal-winning Zone 7 team from the rest of the field.

In the end, though, that’s all they needed.

The Zone 7 squad comprised of Campbell Brown (Indira), Ava Le (Herolov de Wy), Avery Griffin (Daring Queen), and Kaylee Rayner (Gq) made the most of the 5.79 penalties they carried over from the first day of competition, adding an additional five points to end the day on a score of 10.79. Combined Zone 1/3/6 took silver on a score of 11.04; Zone 10 bronze on 12.32.

“It’s definitely stressful to go in first, because you know if you make an error, [you need to] rely on your team for the rest of the round,” said team gold medalist Campbell Brown, who jumped first on back-to-back days of 1.30m competition and was the drop score after Round 1. “When I had the one down in the first [round], I was disappointed with my riding. In the second, though, [I was clear and] it really pays off when you help the team. It feels great!”

It was a tall order and an impressive accomplishment for Brown, 15, of Fayetteville, Arkansas, who has only had her mare for a few months. “[Indira is] very quick—she’s one of my favorites,” Campbell said. “I actually just started riding her in May, so this is a big win for us.”

The rest of the Zone 7 team hail from Texas: Kaylee Rayner, 16, from Houston had a rail in both rounds and became the drop score in the second, leaving the team on zero in Round 2. Avery Griffin of Austin, also 15, jumped clear in Round 2 with just a time fault on the clock in Round 1. Finally, the day’s ‘Most Improved’ award went to Ava Le of Flower Mound aboard her “solid teammate” of more than a year, the aptly named Hero. After a tough start on Thursday, Le returned to the ring to log the only double-clear of the day for the Zone 7 squad.

On Saturday, August 13, the top riders of the week will return to compete in the NAYC Pre-Junior Individual Final. Among those still in contention for the podium: Campbell Brown and the nine-year-old KWPN, Indira, who carry over only 0.43 time penalties from the first day of Individual competition. The one to beat, however, is Day 1 winner and Zone 10 anchor rider, Leila Diab, whose 11-year-old Holsteiner gelding, Quind, hasn’t touched a rail.

“It’s kind of weird to be sitting on zero, and you have everything to lose at that point. I really wanted to help my team out,” said Diab of her clear performance on Thursday.

Once again, the San Francisco rider will enter the Individual Final on Saturday on a zero score. “I think, as you do it more and more, you realize [how important it is to bring] your best self, and just kind of ride how you naturally need to for your horse [to go well],” Diab said.

“To go out there with a cool head [and] a strong game plan is the best way to help out a team—especially as anchor.”