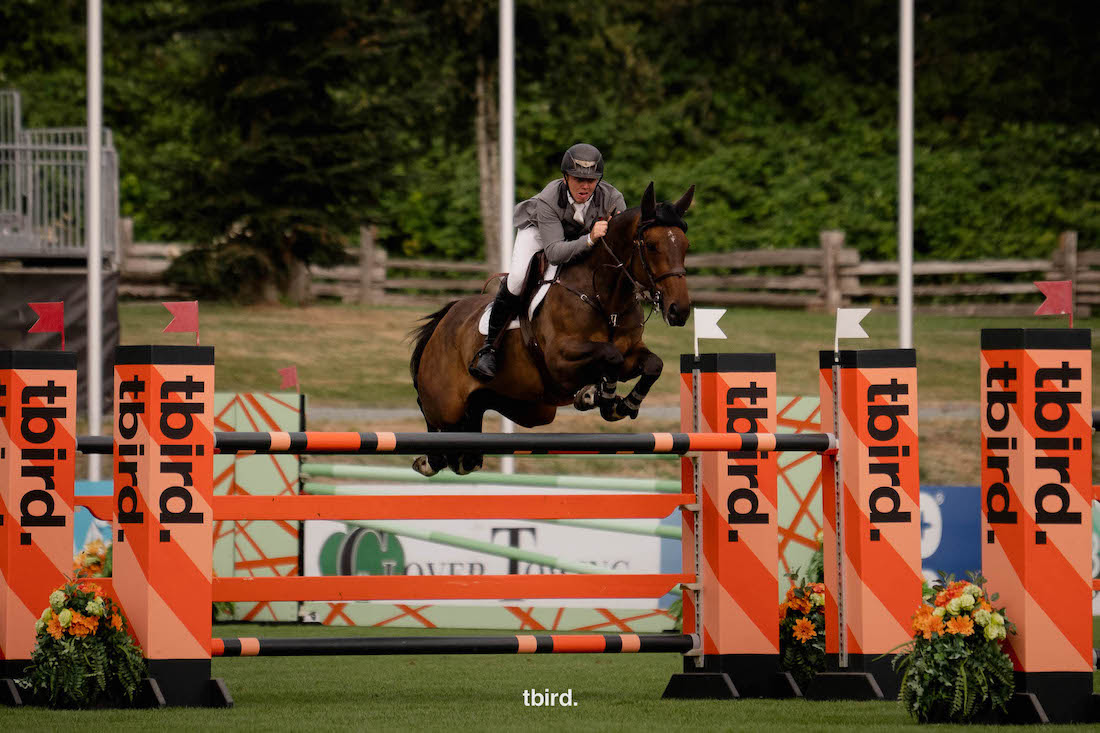 You’d better believe when you edge out tbird’s winningest rider in a jump-off, the world is going to sit up and take notice.

What’s more: Sampson did it by one one-hundredth of a second.

“My god, it doesn’t get any closer,” said the 31-year-old British rider. “I think, just luckily, I was on the right side of the time.”

Sampson and “Jack”—as the Evison family’s Curraghgraigue Obos Flight is known in the barn—left an impressive 63.84 seconds up on the clock, while Swail’s oh-so-close 63.85-second time was good for second place. Kyle King (USA) and Etalon finished third on 64.85 seconds.

It’s a fitting pay-off for Sampson and Jack, who came together three years ago when the show jumper acquired the now-10-year-old Irish Sport Horse gelding from his breeder, Baden Powell. “I just loved his character,” Sampson said of the horse he’s produced up to the grand prix level himself. “He is very ‘gamey’ [and] really wants to win. He’s ultra-careful and he’s fast and he’s brave.

“He actually won at the Dublin Horse Show as a four-year-old, which is quite a big deal in Ireland.”

But it wasn’t until this year that the gelding really landed in the international spotlight after taking the Canadian circuits by storm. The pair came into the Summer Fort Welcome off a tremendous Spruce Meadows run, saying ‘hold my beer’ to show jumping hat trick winners everywhere by taking the win in a whopping FIVE classes at the CSI 2* and CSI 3* levels.

Impressive? You bet. But Sampson attributes their string of success to more than just good luck.

“I don’t ask him to jump big every class, just because he gives so much heart in every class he jumps,” the British rider said simply of the gelding’s careful management plan. Despite his winning record, Sampson added, he hasn’t been tempted to test Jack too much; according to the FEI database, the bay gelding has made just one 1.50m start so far.

There, Sampson and Jack boast a 77 percent and 51 percent clear round rate, respectively, according to JUMPR App. Speed is undoubtedly Jack’s superpower, and course designer Peter Holmes’s (CAN) Wednesday track was well within the Irish gelding’s wheelhouse.

“Conor [and I] kind of did similar strides around the course,” Sampson reflected. “[But] I think my horse is probably naturally a bit quicker than [his].”

There’s nothing harder than earning a consistent winning streak in show jumping, but it seems even against the stiffest competition, Sampson is here to play. What’s more, he’s got a horseman’s mentality toward long-term success.

“You never take advantage of how much your horse is trying to do for you.”