Epicenter Jumps to the Head of His Class with Travers Win 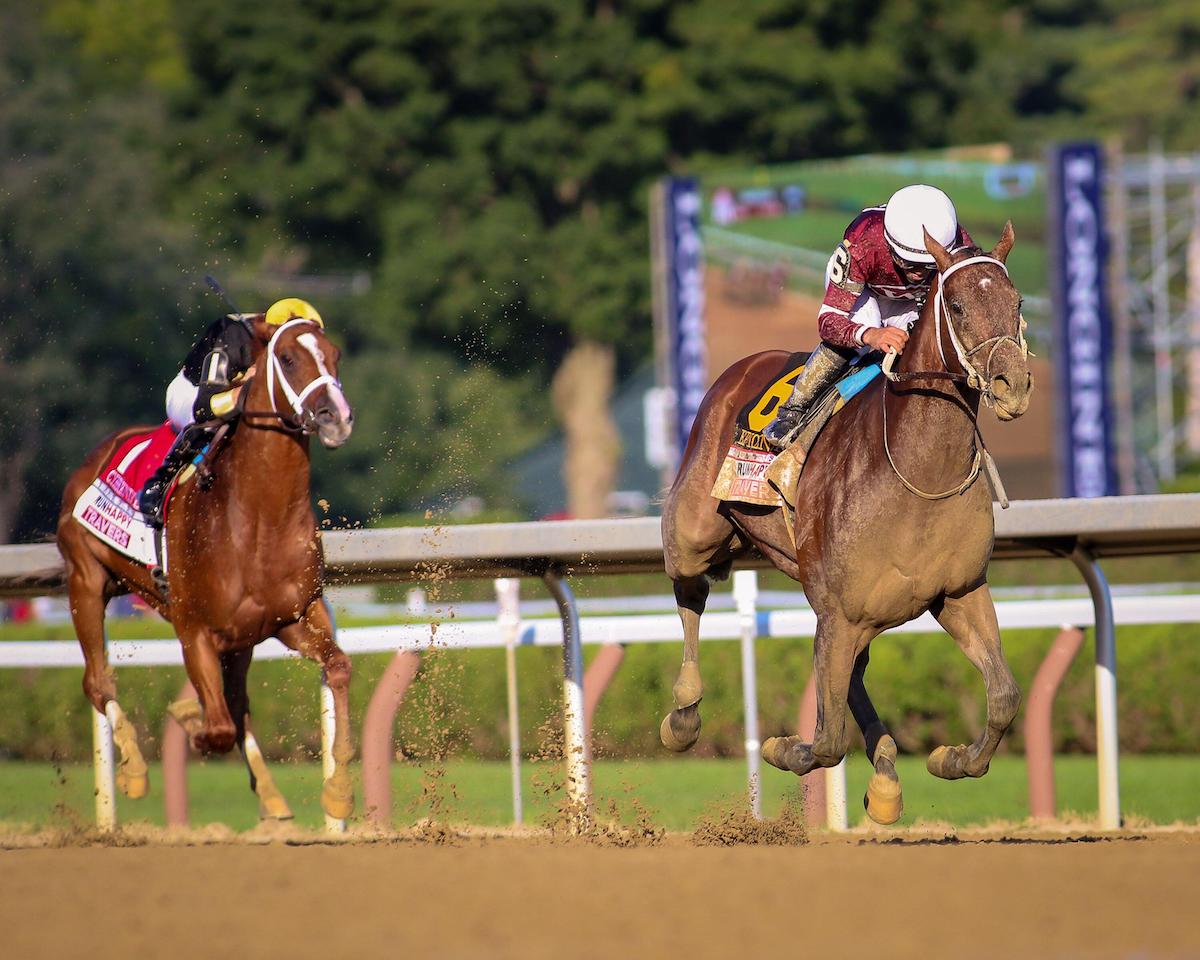 On a clear, bright day at The Spa, the Champion Three-Year-Old Male Eclipse Award chase became clearer and brighter for favorite Epicenter and trainer Steve Asmussen.

The son of Not This Time finally chose a time and a place for his first Grade 1 victory, Saturday’s $1.25 million Run Happy Travers Stakes at Saratoga.

With his convincing five-length closing cruise over Cyberknife, Zandon and Kentucky Derby (G1) winner Rich Strike, the Jim Dwyer (G2) victor immediately shot to the top of a three-year-old male class that seemed not to want a leader.

But it only became easy in the deep stretch.

Arkansas Derby (G1) and Haskell Invitational (G1) winner Cyberknife shot to the lead early and set a fast pace, lengthening his lead going into the second turn. That’s when Epicenter showed speed under jockey Joel Rosario, closing alongside the leader at the top of the stretch and eventually running away from his challengers. He completed the mile-and-a-quarter in a very swift 2:00.72. Arrogate earned the Travers speed record in his masterful 1:59.36 run in 2016.

Speaking of Arrogate, son Artorius stayed with the leaders early, but his expected challenge never came. He lost ground in the backstretch and faded, showing none of the closing speed he displayed in his Curlin Stakes (listed) win.

Absent Epicenter, the 153rd Travers was a nail-biter, the next three finishing together within 3/4 of a length of each other.

Cyberknife held on for a photo-finish advantage over (again) third-place Zandon. Derby winner Rich Strike, predictably running along the rail from the number 2 post, moved just outside for a closing run, finishing well faster than his 2:02.61 Derby time and within a 1/4 length of Zandon, but not swift enough on this day.

It can be expected some challengers from this race will remain in the chase through the fall to the Nov. 5 Breeders’ Cup Classic (G1) and try to wrest the three-year-old crown from the “very nice” Epicenter.

Trainer Todd Pletcher decided to add blinkers for the first time to Shadwell Farm’s Malathaat. As Letruska faded, the four-year-old Curlin filly ran like she saw nothing but the finish line in the deep stretch, winning the 75th running the $600,000 mile-and-an-eighth Personal Ensign.

It was no secret that Letruska under Jose Ortiz would go right to the front and play her usual game of “Catch Me If You Can.” As in last year’s Breeders’ Cup Distaff (G1) however, she got caught again, this time by fast-closing Malathaat, now a candidate for her reigning Champion Older Female Eclipse Award crown.

Matched by Search Results from the start, rivals seem to have caught on to the notion Letruska can run out of gas when she’s in a speed duel with a horse willing to lose in order to stay close.

Last year’s Champion Three-Year-Old Female Eclipse Award recipient, Malathaat was thought to have lost a bit of speed to Clairiere this year, but she was only saving it for the right moment according to rider Johnny Velazquez.

“She can be a little difficult,” explained Velazquez, “so I had to hold her back until she was ready. But when I asked her to go, she had plenty [of speed].”

Speaking of favorite Clairiere, she broke slowly from gate 3, immediately fell multiple lengths behind and never recovered, finishing a very flat last, much as Letruska did as the favorite in the Ogden Phipps (G1).

Believed to have the inside track to the older female Eclipse crown after two impressive 2022 wins over Malathaat, she delivered her worst performance in the Curlin half-sisters’ seven matchups. She was not pulled up and finished the race, not appearing injured. She simply appeared flat.

Search Results held on for second over a fading Letruska with longshot Crazy Beautiful finishing the top four.

Of course, it wouldn’t be Travers Day at “The Graveyard of Champions” without a “corpse.” This year’s victim would have been a shocker anywhere on any day.

Bettors seemed to have believed Jackie’s Warrior could have watched the seven-furlong Forego Stakes from the rail and picked up his trophy and check in the Winners Circle.

The four-year-old son of Maclean’s Music and reigning Eclipse Award Champion Male Sprinter entered gate number 3 as the prohibitive 1-9—you read that right—favorite.

And why not? Undefeated in 2022, he had already earned four consecutive graded victories on the year, including two G1s. He had a gaudy 16:11-2-1 lifetime record.

As expected, he was challenged early, and through six furlongs, by 15-1 speedster Pipeline.

As expected, he moved into the lead at the top of the stretch.

But not at all as expected, Godolphin’s 8-1 maybe, Cody’s Wish, lived up to his own 9:5-1-3 entering record. Stepping up a bit in class, the (another) son of Curlin ran off the pace and closed swiftly on the outside to fulfill Hall of Fame trainer Bill Mott’s wish and earn his first G1 win.

Two other G1 races with Breeders’ Cup and Eclipse Award implications were on the Travers Day card.

Kentucky-bred five-year-old Gufo won last year’s $750,000 turf Sword Dancer. But he seemed to have lost a bit of swagger this year. He won the 12-furlong Pan American Stakes (G2) at Florida’s Gulfstream Park, but finished third in the 10-furlong Manhattan Stakes and second in the 11-furlong Man O’ War, both G1 contests at Belmont.

Part of the Breeders’ Cup “Win and You’re In” Challenge series for an expenses-paid gate in the Breeders’ Cup Turf (G1), this year’s Sword Dancer drew the predictable throng of Euro turf horses and riders from the United Kingdom, Ireland and France seeking to unseat the race’s reigning king.

But the son of Declaration Of War proved he still has plenty of fight left in him. Closing late under Joel Rosario, he prevailed over fellow Kentuckian, Mira Mission, and Briton, Soldier Rising, to repeat in the Sword Dancer and continue hopes of earning the green-grass Eclipse Award for the Blue Grass State.

Jack Christopher looked like the best three-year-old male sprinter on dirt in the $500,000 H. Allen Jenkins Memorial. Tracking leader Conagher throughout the seven furlong contest, the son of Munnings overtook the fading frontrunner with a furlong remaining.

The current male sprint division leader would prevail under Jose Ortiz by three-quarters of a length over closing Gunite with Runninsonofagun third.

The Thoroughbred season in the U.S. continues with a series of Breeders’ Cup challenge, qualifying and prep races nationwide as the Nov. 4 and Nov. 5 Breeders’ Cup fields take final shape.

The eagerly anticipated $1 million Pacific Classic (G1) takes place Sept. 3 at Del Mar. There, four-year-old Flightline will follow-up his Jun. 11 victory in the 8-furlong Metropolitan Handicap (G1) by stretching out to the mile-and-a-quarter in preparation for the Nov. 5 Breeders’ Cup Classic (G1).

Other important races include the Sept. 3 Jockey Club Gold Cup (G1), this year at Saratoga, and the Sept. 24 Pennsylvania Derby (G1) for males and Cotillion (G1) for females at Parx.