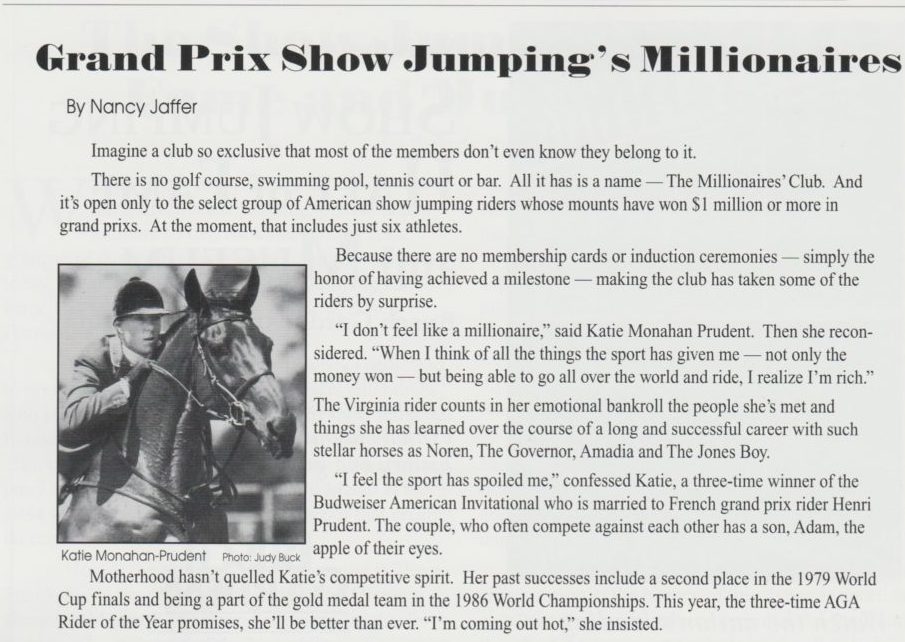 Each week on #HallOfFameThursday, Horse Network recognizes members of the Show Jumping Hall of Fame, and on the first Thursday of every month, an historic article. This week’s features six riders who accumulated $1 Million in prize money, as memorialized in an article by Nancy Jaffer in the 1994 Newport Jumping Classic program.

Back when $50,000 was considered good prize money for a Grand Prix, the program for the 1994 Newport Jumping Classic featured an article marveling at the select group of riders who had won $1 million dollars in the careers. Not surprisingly, the six riders featured are all in the Show Jumping Hall of Fame.

Imagine a club so exclusive that most of the members don’t even know they belong to it.

There is no golf course, swimming pool, tennis court or bar. All it has is a name — The Millionaires’ Club. And it’s open only to the select group of American show jumping riders whose mounts have won $l million or more in grand prixs. At the moment, that includes just six athletes.

Because there are no membership cards or induction ceremonies — simply the honor of having achieved a milestone — making the club has taken some of the riders by surprise.

“I don ‘t feel like a millionaire,” said Katie Monahan Prudent. Then she reconsidered. “When I think of all the things the sport has given me — not only the money won — but being able to go all over the world and ride, I realize I’m rich.” The Virginia rider counts in her emotional bankroll the people she’s met and things she has learned over the course of a long and successful career with such stellar horses as Noren, The Governor, Amadia and The Jones Boy.

“I feel the sport has spoiled me,” confessed Katie, a three-time winner of the Budweiser American Invitational who is married to French grand prix rider Henri Prudent. The couple, who often compete against each other has a son, Adam, the Katie Monahan-Prudent Photo: Judy Buck apple of their eyes.

Motherhood hasn’t quelled Katie’s competitive spirit. Her past successes include a second place in the 1979 World Cup finals and being a part of the gold medal team in the 1986 World Championships. This year, the three-time AGA Rider of the Year promises, she’ll be better than ever. “I’m coming out hot,” she insisted.

The always calm Hap Hansen took the news that he was part of the Millionaires’ Club with equanimity.

“I wasn’t aware of it,” is how the Californian reacted when told that he was part of the favored circle.

He figures he owes much of his total to the efforts of Juniperus, who he rode for five years. In 1993, Hap was fifth on the money-won list with Fairway’s $94,894, and second in the number of clear rounds, with 14 of his 27 efforts on Fairway faultless. He also had the best placing percentage, seven for seven with Henzo, and the highest winning percentage — 30 8 on Acord.

Hap’s consistency is such that he took second and third place in that category as well. And he topped the winning performances list, taking five grand prixs on Fairway.

Hansen, a man of relatively few words, lets his achievements speak for him. The American Horse Shows AssociatioWHertz Equestrian of the Year has been a perennial winner of the West Coast Volvo World Cup League and was AGA Rider of the Year in 1990, but he’s always looking for new challenges to conquer.

One he’d like to try is a $1 million grand prix, and Hansen figures someday there might be one for him to enter. “I can foresee someone in the United States wanting to put on the biggest,” he contended, pointing there are classes in both Mexico and Canada that offer major money.

But if he had to ride for a cool million all at once, instead of accumulating it over the years, Hansen conceded it wouldn’t be easy. “I’d probably be so nervous,” he admitted.

The bright and breezy Leslie Burr Lenehan laughed when she heard that she belonged to the Millionaires’ Club. “I wish I had the million!” chuckled the Connecticut resident, another Budweiser American Invitational winner. The idea that it’s possible to earn that much in the course of a show jumping career pleases Leslie.

“Things like that are obviously good for the sport,” she said, but she wishes the club’s membership were larger. “It’s too bad there are so few of us,” said Lenehan, an Olympic team gold medalist in 1984 on Albany.

Her other top mounts over the years have included McLain, on whom she won the 1986 World Cup finals; Pressurized, and the great Gem Twist, who she will ride in the 1994 AGA Championship.

Leslie, who is married to horseman Brian Lenehan, also won the AGA Rider of the Year crown in 1983. Like Katie Prudent, the foundation for her success came in the equitation division. Both won the ASPCA Maclay finals, and Katie took the AHSA Medal as well.

Millionaires’ Club member Michael Matz took another route to the top. He didn’t even begin competing until his teens. But despite his late start, he has come far.

Leslie Lenehan photo: James L. parker Matz’s horses have won more money in grandprix than those of any other American rider. The Pennsylvanian is married to the former D.D. Alexander, who was his teammate on the U.S. squad that traveled to Europe last summer, where the Americans corralled the Aga Khan trophy for the Nations’ Cup in Dublin.

A two-time Olympian now ranked number 10 in the world, Michael is best known for his partnership with the great Jet Run, on whom he took the 1981 World Cup finals.

While he’s flattered to be a member of the Millionaires’ Club, Matz noted, “I didn’t own any of those horses.” That means all the prize money didn’t come to him. Even if it had, it wouldn’t have been all profit.

Matz estimates it can cost as much as $75,000 annually for the care, training, feeding, transport and entry fees of a grandprix horse. While grandprix riders and race jockeys both get a percentage of the purses in their respective sports, Matz notect “the jockey pays no training expenses.” But, he observed, “it’s a lot better than it was. Years ago, we were jumping for $10,000 and $15,000. A $25,000 grandprix was a big deal. This is certainly a big improvement.”

Matz, who won back-to-back Budweiser/AGA Championships in 1991 and 1992, also has two AGA Rider of the Year titles to his credit. He’s well on his way toward his second grandprix million, having earned $55,189 last year on Rhum IV alone, not to mention the prizes he garnered on other members of his string, including The General and Olisco.

The newest member of the club is Margie Goldstein, one of the circuit’s busiest riders. Twice AGA Rider of the Year, Goldstein achieved her record of success despite several major injuries that kept her out of the saddle for extended periods.

With her trademark go-for-broke approach, the petite Floridian broke the million dollar barrier just last summer. “It’s divided between quite a few different horses,’ said Margie, who perhaps is best known for her rides on Saluut Il. But last year, her mount

La Costa was the circuit’s busiest horse, with 33 starts. He also was 11th in the grand prix money won, with a total of $55,724, and first among the eight-year-olds entered in competition.

Margie likes the idea of the Millionaires’ Club. “Whether it’s realistic or not, it’s definitely enticing to owners, a promise they will get something back for all they put Margie Goldstein Photo: James L. Parker into the sport.” As for the riders, she commented, “It gives people a goal to work towards.” She’s amazed she’s become a member this fast. “I didn’t even start on the AGA circuit until 1986,” she said.

The first millionaire was Rodney Jenkins, who was competing in Grandprixs and winning then — before any of the other club members tried their luck over the big jumps.

Jenkins, who retired from Grandprixs in 1989, once dominated the sport in this country as no one else ever has. Aboard the legendary Idle Dice, the red-headed Virginian drew automatic cheers from whatever audience was watching their effortless-looking performances.

The 1987 AGA Rider of the Year, Rodney displayed a natural talent that was always a source of awe. Equally at home on a hunter or a jumper, he made the Millionaires’ Club largely on money he earned in the days when purses were far smaller than they are now.

With prize money ever-increasing, there’s no doubt the Millionaires’ Club will be getting bigger. This year, for instance, the Budweiser/AGA Championship has gone from $100,000 to $125,000. Luckily, there won’t be the need for an addition to the Millionaires’ non-existent clubhouse.

So who will be next to join? Waiting in the wings are George Lindemann Jr., Norman Dello Joio, Barney Ward and Anne Kursinski. The entrance requirements couldn’t be simpler. All you have to do is win.

(The writer wishes to acknowledge the invaluable statistical assistance of Peter Doubleday and Ryegate Show Services.)