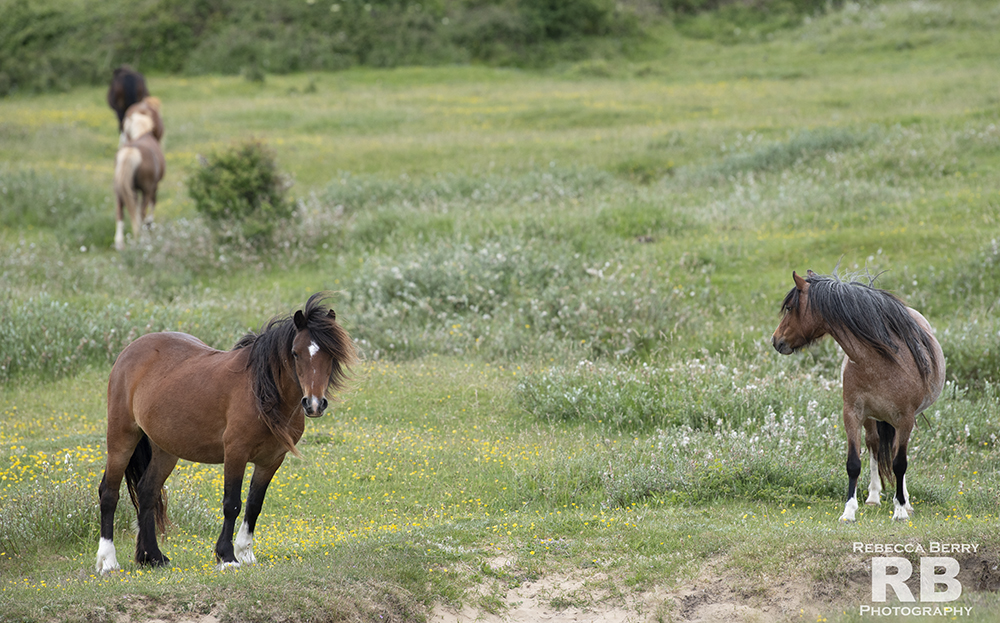 When it comes to finding places in the UK, I often don’t.

Well, not easily anyway. I make a lot of wrong turns, head south when I should go north and just when I think I have a handle on the roundabout situation, I’m presented with two stuck together. What kind of circular hell are these spirals of confusion?

Nevertheless, I forge ahead despite my concerns about breaching my rental car mileage allotment and getting stuck in a double roundabout indefinitely.

I mention this because my goal for the day was to find some “wild” Welsh Mountain Ponies. I thought the hard part would be locating them, not locating the way to where they may be. I’m now very familiar with an eight-mile stretch of road in the southwest of Anglesey in North Wales.

Thankfully, just as I was questioning my life choices I happened upon a café. And before long I was sitting down with the owners having lunch, discussing my options, vis-à-vis finding ponies.

“How do you feel about hiking eight or nine miles?”

That was the husband’s first question and to tell you the truth I didn’t feel too good about it. I’ve driven through the Snowdonia National Park and got an inkling of what this “hike” may entail. I believe the term used here is scrambling and given that I just fell up some steps the other day, I don’t know that scrambling up craggy rocks would be wise.

“Make sure the weather holds if you decide to take the hike,” he said next. “If the mist rolls in, there is a good chance you will get lost.” This plan was sounding dubious and as much as I like the word intrepid, I was beginning to think it is a word better suited for someone else.

I know what some of you are thinking. A hike through Snowdonia? How fabulous. But let me explain to you that I am an ill-equipped, weak-ankled, middle-aged woman travelling alone with zero survival skills and two heavy cameras. I don’t mind taking some risks, otherwise, I wouldn’t be here, but I know my limits.

I must have hidden my concern about a potential solitary trek through the hills of Snowdonia because the kind man pushed forth with directions. Just last week he had come across the ponies and was keen to get me to the same general location to share the experience. If, in the off chance, they were still hanging about.

“Do you have the What3Words app?” I do actually and felt quite pleased to say so. “The words you need to find the head of the trail are lawyer.apply.fell.” Two of those words made me uncomfortable as did his offhanded mention of, “Your phone won’t have service much beyond where you park.”

That cinched it. The hills of Snowdonia will not be blessed with my presence. Not this time anyway.

Then his wife, who had remained patiently silent, said, “Why not try your luck at the sand dunes a few miles down the road before you take on the hike.” She had me sussed out.

And with that, I was on my way.

I found the area with little trouble and with no help from the GPS, which was a nice fist-shaking, in-your-face sat nav lady moment for me. I gathered my cameras and set off down a sandy path towards the dunes. And before I was fully immersed in the Newborough Warren & Ynys Llanddwyn Nature Reserve, I came upon two Welsh Mountain Ponies and before long I had found seven. Though these ponies aren’t wild so much as free-roaming.

This is why I love to travel. One minute I’m busy longeing myself in a car around a roundabout and the next thing I know I’m following a small herd of Welsh Mountain Ponies across sand dunes on the edge of the Irish Sea in an unpronounceable area of Wales. This is what life is about. At least for me.

These beautiful ponies I was following have been roaming about Wales for over a thousand years. When the Romans occupied Britain for those 400 hundred years or so (43–410 AD) and they bred their horses to the Welsh ponies creating a sure-footed packhorse who could travel nimbly at speed across the rugged terrain. The Romans also introduced the ancient Arabian horse to the ancient pony population, to which the Arab influence is still noticeable today.

The first written reference to them goes all the way back to the year 930 when Hywel Dda ruler of Deheubarth jotted down a few laws. It’s within these laws that three types of horses and ponies in Wales are mentioned.

Today the Welsh ponies and cobs are classified into four sections:

There are many written descriptions of The Welsh Mountain Ponies from the 15th century, and it is evidence enough to suggest that these resilient ponies have existed, fundamentally, since prehistoric times, though in the form of their ancestors, the Celtic pony.

Unfortunately, Henry VIII, (as discussed in Why We Measure Horses in Hands), was displeased with these wild ponies as he felt they were unsuitable warhorses and ordered all stallions under 15 hands and all mares under 13 hands be destroyed. Thankfully, some of these crafty ponies managed to escape into the hills of Wales and avoided the culling. This exodus had the ponies breeding an increased level of intelligence, hardiness and agility, amongst other things improving upon an already significant breed.

In the 1700s farmers recognized the merits of grazing ponies and cobs in the Welsh hills with sheep and cattle. As time ticked along the farmers realized if they hitched a cob to a cart the daily farming workload was reduced. From there the breed become more popular and it wasn’t long before hundreds of ponies and cobs would trade hands at the autumn fairs. With such interest in Welsh equines, the breeding of them became more selective.

The breed became so popular that by the late 1800s ponies were being exported to the USA.

In 1901 a number of farmers and landowners started the Welsh Pony and Cob Society and the first studbook was printed.

I think Sir Richard Green Price, who studied the Welsh Mountain Pony, said it best in 1904 (from the Welsh Stud Book).

“Wonder indeed we may at the survival of these little animals in such a perfect state as we find them today on their native pastures. Persecuted as they have been, not only by laws, but also by the usages of civilization by their would-be friends, the farmers; by starvation, dog-driving, contaminated by gross carelessness in their mating. In-bred, ill-fed, ill-used and ill-mated for centuries, yet there they are today the living personification of the survival of the fittest, the same little native animals that can live their life where sheep and cattle can only die, with every instinct sharpened by self-preservation, and every limb tested by exertion, they fight their battles unaided, though often in restricted pastures and wired-in mountain enclosures.”