When Donkeys Are Worth More Dead Than Alive 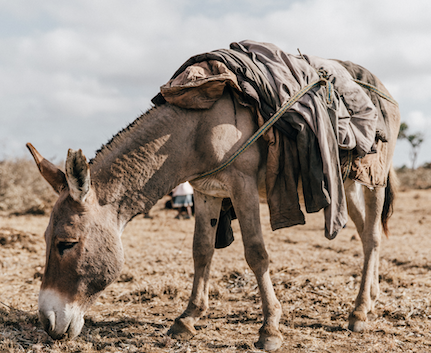 The world’s donkey population will be cut in half within the next five years if the current pace of demand for “ejiao” keeps up.

Derived from boiling the hides of donkeys, ejiao (said: eh-gee-yow) is a gelatin-based traditional Chinese medicine that can be found in luxury cosmetics, powders and a variety of food products. It is said to improve blood circulation and treat afflictions like anemia, infertility, impotence and insomnia. However, the healing properties have yet been proven in medical studies, according to NPR.

The United States is the third largest importer of ejiao, accounting for approximately $12 million in imports annually.

A new bill before Congress is looking to put a stop to the trade. The Ejiao Act | H.R. 5203, introduced by congressman Don Beyer (D-VA), would make it illegal for the U.S. to import or sell the ejiao.

“The international trade in donkey-hide gelatin products is leading to the mass slaughter of donkeys and widespread harm to impoverished communities around the world, and Congress should take action to halt all importation of those products into this country,” said Beyer.

As an industry, ejiao manufacturing raises a number animal welfare concerns. The most pressing of these is that the supply and demand scale is dangerously off-balance. China’s current supply of donkey hides is 1.8 million per year, while the demand is steadily climbing to over 4.8 million per year.

Already, the swelling slaughter rates are having devastating effects. The donkey population in China has fallen below 76%. Donkeys and donkey skins are now being sourced from other countries, including Africa, where 600 million people rely on them as working animals.

Among those affected are individuals like Stephen Kimiri of Narok, Kenya, who has spent the past eight-years delivering water to homes and business with the help of his two donkeys.

“Before I got these two friends of mine, I had no permanent job and no job security. Now I wake up every day, take the donkeys to the river and get money. I have gone far and taken my children to secondary school. I have also bought my own plot so I know we will have somewhere to live,” Kimiri told Brooke, an international charity that protects working horses, donkeys and mules in developing nations.

As demand has increased, so has both purchase prices and theft. The cost of a donkey in Kenya, reports Brooke, as more than doubled from $105 to $215. In Egypt, it has risen from $20 to $220, according to the Donkey Sanctuary. Dealers makes up the majority of the donkey trade, but a significant number of donkeys are also being stolen from their owners—and are now too expensive to replace.

It’s a reality Kimiri knows all too well. One morning, Kimiri found one of his donkeys were missing. He was later devastated to discover it was one of many in town that had been stolen, killed and sourced for its hide. Ejiao can sell for up to $390, making donkeys economically worth more dead than alive.

“I felt my life was over. I couldn’t rely on one donkey to do everything…the donkeys feed me and my family. The donkey is my boss, I depend on it for everything,” said Kimiri.

In addition to his family’s loss, Kimiri expressed that the surviving donkey was affected, missing its friend.

“More and more people in poorer countries are seeing animals upon which they depend stolen and killed to meet demand from the ejiao trade. The United States should take action and help shut down this illicit trade that leads to substantial harm to humans and animals worldwide,” said Beyer.

Many countries have attempted to control, or take action against, the donkey hide industry but the overall lack of regulation has resulted in the donkeys being illegally shipped across borders to be slaughtered elsewhere. Often where there is little consideration paid to humane treatment and slaughter.

“Five countries have banned exports of donkey hide—Pakistan, Senegal, Mali, Burkina Faso and Niger—but the Donkey Sanctuary warns that more countries need to ban the slaughter and export of donkeys for their skins,” writes Katherine Purvis in The Guardian.

The risk goes even further.

The World Organization for Animal Health believes that illegal transport of animals across borders contributed to an equine flu outbreak in 2019 in West Africa that killed 60,000 donkeys in Niger. Humans are also at risk for diseases like anthrax and tetanus, especially considering the illegal and unregulated trade.

Brooke USA has launched a campaign to pass the Ejiao Act | H.R. 5203 in congress, which would make it illegal to import or sell ejiao in the United States. To support The Ejiao Act (H.R. 5203) and help stop the import and sales of ejiao in the United States, visit brookeusa.org/ejiao-act. There is also a tab on the organization’s website with links to fundraising efforts and legislative advocacy.