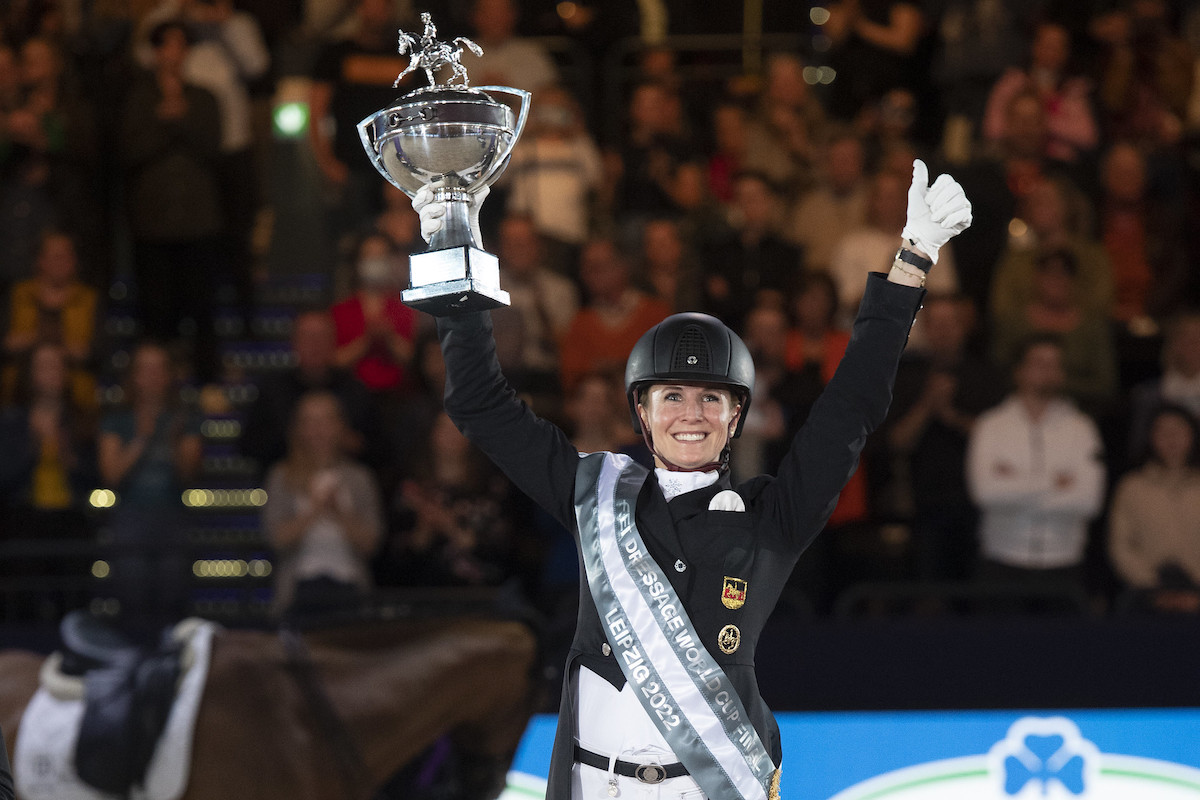 At six months of gestation, a human fetus is anywhere from seven to 12 inches long and may weigh between one and two pounds. The baby has fully formed lungs and a unique set of fingerprints, and is beginning to focus on sounds outside the uterus.

For the one snuggly ensconced in Jessica von Bredow-Werndl’s womb, those sounds were a sold-out stadium erupting into thunderous cheers and applause for a history-making performance in the FEI Dressage World Cup Final at Leipzig, Germany.

Shimming down the center line with her Olympic partner TSF Dalera BB, von Bredow-Werndl became the first German to win the championship on home soil since the series started in 1986. She now holds the trifecta of dressage titles as the reigning individual Olympic, European and World Cup Final champion.

If the world No. 1 ranked rider was experiencing any of the common pregnancy symptoms like heartburn, hot flashes, or backaches, it didn’t show in Leipzig.

Seventeen riders from 12 nations took to the 20 by 60 on Thursday for the Short Grand Prix, a four and half minute test demonstrating self-carriage of the horse, partnership, fluid movement and seamless transitions. von Bredow-Werndl and Dalera pulled off an effortless-looking test that showcased the Trakehner mare’s elegant gaits and ultra-smooth transitions to score a personal best of 84.793 percent and end the day in first.

“It’s difficult to find better words than what I’ve said about this horse. She does her best every time!” remarked a teary eyed von Bredow-Werndl. “She’s always on fire and always willing to do her very best.”

Come Saturday’s Freestyle, they set the Leipziger Messe alight once again with the only performance to score in the 90s. Returning in reverse order and riding to the same classical piano melody that won them an Olympic gold at Tokyo, von Bredow-Werndl and her 15-year-old partner earned marks of 10 from multiple judges for their piaffe work and transitions. Their score a 90.836% put a stamp on the win, their 14th consecutive FEI victory since the Tokyo Games in July.

“I can’t describe it in words. It was so emotional when I finished the test,” said von Bredow-Wendl, who is due to deliver her second child in August.

“This mare is just incredible. When I enter the arena, I know she will give her very best. Always. She leaves her heart in there.”

The silver medal was awarded to Cathrine Dufour (DEN) and the 10-year old Vamos Amigos.

Defending champions Isabell Werth (GER) and Weihegold OLD, winners of three consecutive World Cup Finals, took home the bronze medal in an emotional performance with her longtime partner. The 17-year-old mare has only finished off the podium once in 10 championship performances and was retired from competition after Saturday’s award ceremony.

The World Cup Finals continue with the Driving and Jumping Finals on Sunday, all streaming on FEI TV.