War and the Wild Horses of Chernobyl 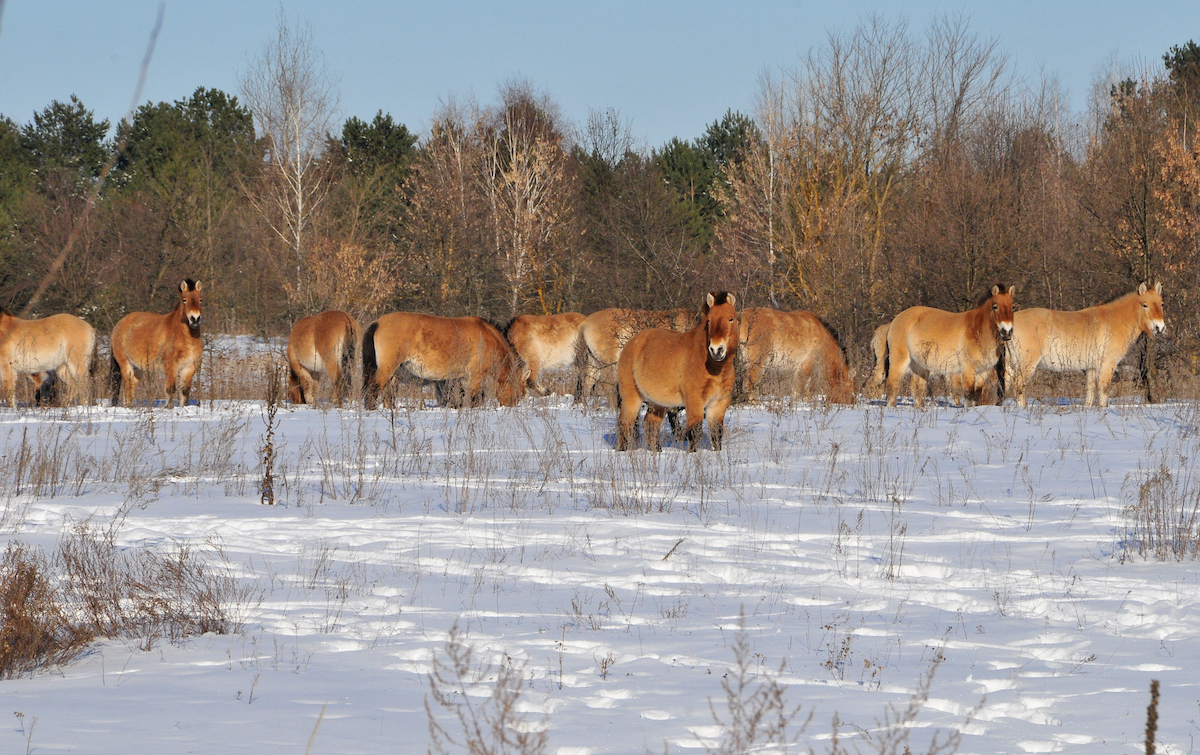 In its efforts to invade Ukraine, Vladimir Putin’s troops took control of the Chernobyl nuclear plant in late February.

Troops seized the exclusion zone around it, which is now a wildlife refuge where wolves, elk, and other animals live mostly undisturbed. In the surrounding woods are bands of the last truly wild horses, caught once again in the crossfire. As the site of one of the worst nuclear disasters in history, experts worry what will happen now that the radiation in the soil has been disturbed.

The Takhi, or Przewalski’s horse, once ran wild throughout Europe and Asia—prehistoric paintings of their ancestors prance on cave walls in France. Their tufted manes, like that of the Norwegian Fjord, are the same now as they were then. The last known wild Takhi was spotted on the Steppes of Mongolia in 1960. Their numbers were decimated by hunting and political strife. Once prevalent in zoos across Europe, World War II left the global population at fewer than 40 horses.

In the 1990s, the Takhi were reintroduced back to Mongolia and several other places in Europe, including the Chernobyl exclusion zone. As a result, there are over 150 Takhi living in an area people no longer can.

As images and reports of the turmoil in Ukraine pour in, I find myself imagining the Takhi, like those I saw in the zoo as a child. Their dun coats starting to loosen in the spring air, fleeing from the alien sound of gunfire. Their zebra striped legs carrying them away from advancing armies. As of this writing, though, this image is all educated speculation. There are many reports about the cats and dogs of Ukraine, very little is yet reported about the country’s equines, though notably the FEI has set up a relief fund for equestrians in the country.

Still, the plight of both the Takhi and the recent images of cats in bomb shelters in Kyiv have me thinking of an essay by Aminata Forna where she describes riding racehorses abandoned by their owners during the Iranian revolution of the 1970s. As the money for hay ran out, the man who stayed behind to care for them told a teenage Aminata that she could keep the ones she wanted if she found a way to feed them.

It’s a common theme in the times of war. In 2016, The New York Times reported on how many horses ridden by tourists in Egypt had also been left to starve because the Arab Spring had scared away tourists.

Sometimes, the horror of war even borrows ideas from animal husbandry. In her book The Perfect Horse, Elizabeth Letts noted how the Nazi regime tried to use the Lipizzaner breeding program to perpetuate the horrific pseudoscience of the master race and how the population of horses in Europe was cut by half during the war.

The age of the cavalry may be long gone, but animals continue to a part of human conflict. Our horses’ well-being and our own are intertwined in a millennia-long dance. On the one hand, our dependence on one another made both species prosper. On the other, it has left us both vulnerable.

I do not know how to prevent wars or stop violent men who act on greed. What I do know is that stability, democracy, and equality are not just good for people but good for our beloved horses as well—even horses as wild as the Takhi.