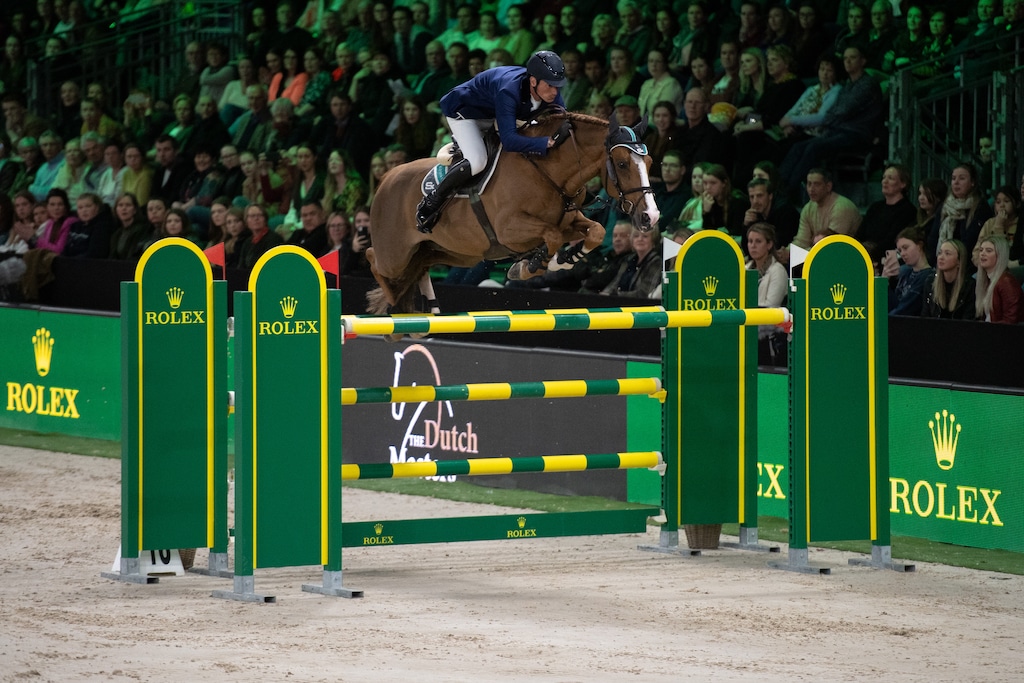 Founded in 2013 and comprised of four of the most competitive Grand Prix in the world—CHIO Aachen in Germany, CSIO Spruce Meadows ‘Masters’ in Canada, CHI Geneva in Switzerland and the Dutch Masters in the Netherlands—winning just one leg is the stuff of every professional show jumpers’ dreams.

To win the Grand Slam requires capturing three of the Majors, consecutively, in a single season, on any horse. To date, only one rider has managed to accomplish the feat: Scott Brash (GBR) and Hello Sanctos in 2015.

But if there’s a rider in recent history who has the horsepower and competitive record to make a run at the title, it’s Daniel Deusser.

And he’s set himself up to do it. The German rider won the first Major of 2022 on Sunday riding Scuderia 1918 Tobago Z to a record-tying third victory in the Rolex Grand Prix at the Dutch Masters in ’s-Hertogenbosch, The Netherlands. Deusser claimed the same Grand Prix in 2007 with Air Jordan Z and again in 2015 aboard Cornet d’Amour. Albert Zoer (NED) is the only other rider to have won the Dutch Masters’ feature event on three occasions (2006 with Okidoki; 2009 and 2011 aboard Sam).

“I was feeling confident as the horse has felt in very good shape over the last couple weeks, but you still have to bring it on the day of course,” said Deusser, who topped the 12 horse jump off by shaving 0.13 seconds off the time of home favorite Harry Smolders (NED).

“Scuderia 1918 Tobago Z jumped very well in the first round, he felt really nice but we had a lot of competitors in the jump-off, which always makes it harder and puts on a little bit more pressure. It made me think about what tactic I should play a bit more, I tried to do one less stride from the first to second, but I knew even when I had done my perfect round, that there were good riders to come and it could maybe be beaten. I was very lucky that the ones who tried to go faster had the last down and I am over the moon with this result.”

Deusser is now in the hunt for the Grand Slam title. Or rather, in the hunt again. The world #5 ranked rider won the Rolex Grand Prix at Aachen in 2021 with Killer Queen, earning a 250,000 Euro bonus this weekend for taking two out of the four shows in his cycle.

He joins an elite group of riders to have captured two Majors since 2013. German compatriot Marcus Ehning is the only other one to have done it in the same cycle, taking Aachen and Geneva in 2018 with Pret a Tout. Steve Guerdat (SUI) has twice topped the field in Geneva, winning in 2013 and 2015 with Nino des Buissonnets, and at Spruce Meadows in 2021 with Venard de Cerisy. Philipp Weishaupt (GER) won Aachen in 2016 and Spruce Meadows in 2017 with LB Convall while Kent Farrington (USA) and Gazelle took Geneva in 2017 and Aachen in 2019.

International Women’s Month aside: Beezie Madden (USA) is the only female rider to have claimed a Rolex Grand Slam Grand Prix to date. She and Darry Lou won at Spruce Meadows in 2019.

Deusser’s Grand Slam fate will be determined at the next stop at Aachen in July.

“I’m very happy that it has worked out and I have won two out of the four Majors, and now I go to Aachen as the new live contender, which is something very special. I will now work towards Aachen and make sure my horses are in the best shape.”