Home > Blog > Books and Film > Thelwell: Beyond the Iconic Illustrations 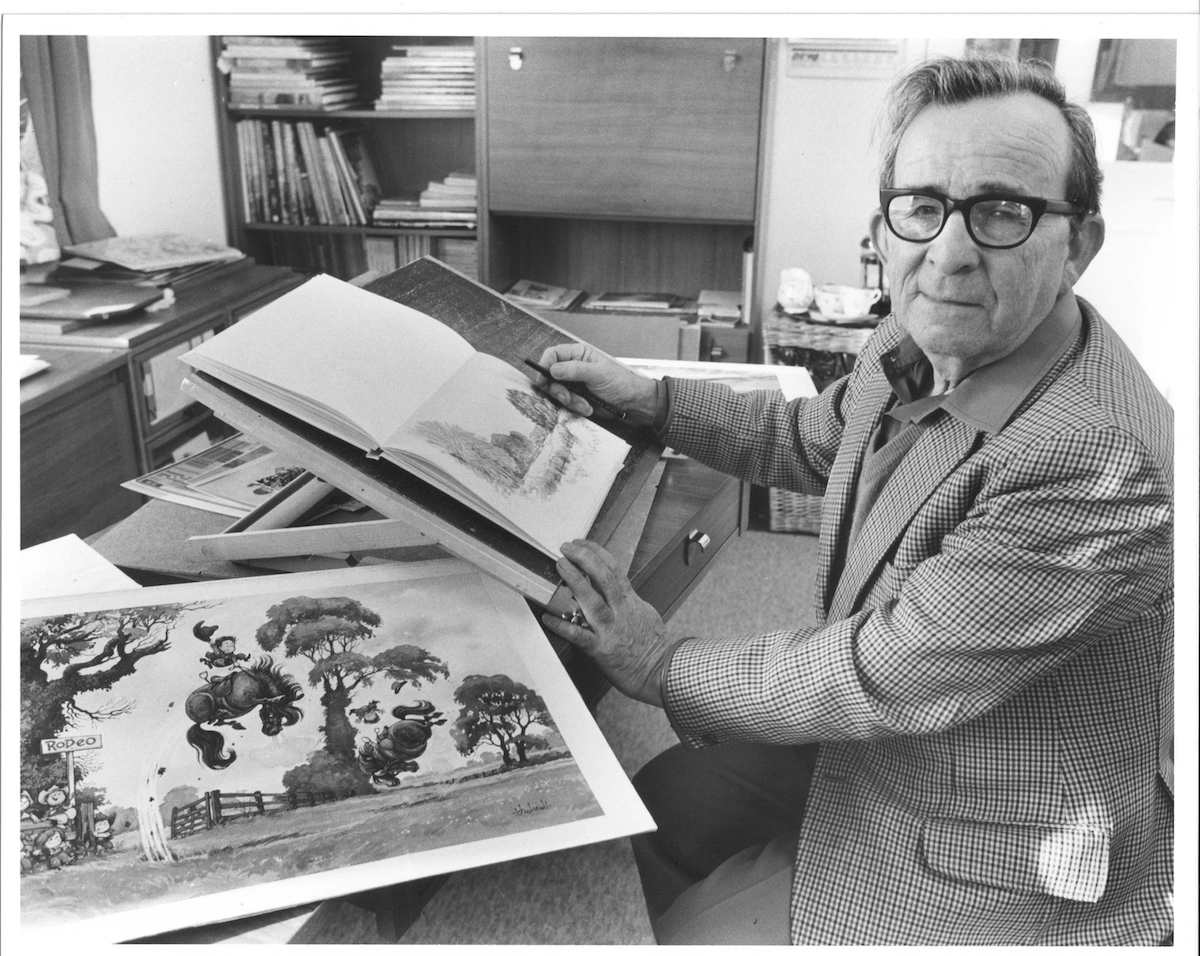 Thelwell drawings transport me back to the age of five when my love of horses first took hold.

Those unmistakable illustrations of fat little ponies remind me of going to Shanks Saddlery with my mom and breathing in the smell of well-oiled leather. A scent only a tack store can hold.

I’d walk around running a hand over the saddles, staring at the wall of hunt caps displayed in an array of colors and eyeing up the leather riding boots. I’d lose myself in the racks of show clothes, the wooden floor squeaking under my feet. Hunt coats, breeches, ratcatchers, stock pins and very smart leather gloves.

It was a world of wonderment and childhood dreams.

The Thelwell paraphernalia had its place in the back of the store. Coasters, mugs, figurines, note pads, books and all sorts. I knew if I waited patiently and asked politely, my mom would buy me something. It was an apron I was after, though I don’t know why. I didn’t spend much time cooking when I was five. A trend that continues today, as it happens.

My parents owned all the Thelwell books, and they could be found throughout the house. I thought it was fun because, well cartoons and horses. But for my parents, it probably meant something more on the lines of English (which my dad was) and country life (which my mom hailed from). The books denote sensible humor and the ability to laugh at oneself. That was my little family all over.

The name Thelwell does so much. No matter what font I see those letters in, I’m taken back to a simpler time. It’s such a great name. To me, even at five, Thelwell was a brand. It never occurred to me there was an actual living, breathing human behind those iconic drawings.

But there was and his name was Norman.

I had always assumed, because it’s rather easier than research, that Norman Thelwell’s entire career centered around ponies. Specifically around those fat disgruntled wayward ponies with knobbly knees and disheveled manes and the chubby undeterred little children that rode them, who, if under instruction were taught by a plump, heavily bosomed instructor in a tweed coat.

But I was wrong, which is often the way with assuming.

I knew Thelwell strayed from the ponies just far enough to capture the humor that fishing, farming and golfing offered up. But what I didn’t know was that at 18, he joined the army and served in the East Yorkshire Regiment, Royal Electrical and Mechanical Engineers, whatever all that means. He spent part of the war in India, where he was the art editor of an army magazine in New Delhi, which does not fit well with my imagination at all.

After the war, where undoubtedly he firmed up his belief that drawing was the way forward, he went to art school and a few years later taught design and illustration at another art school.

Thelwell had his first cartoon published in the satirical magazine, Punch, in 1952. He continued to supply the magazine with his illustrations for 25 years, amassing over 1500 cartoons, 60 of which were front covers.

But it wasn’t his ponies that were found in the magazine in the first year. It was his idea of British country life, focusing on the ineptness of humans and the cunning of animals praying on us weak-minded folk.

In 1953 Thelwell drew his first pony cartoon for Punch. It was an immediate hit, striking a chord with all the hapless pony owners of the British public. And let’s be honest, ponies make hapless fools of us all. Fan mail rolled in, phone calls were placed, and the magazine had no choice but to get Thelwell to draw up a two-page spread depicting all the charming pony characteristics he could muster. And the rest, as they say, is history.

Thelwell was no slouch. As a freelancer his work was found in such publications as Picture Post, Farming Express and Farmer’s Weekly, to name but a few. He drew the images on many of the James Herriot book covers, worked for TV and illustrated advertising for little-known companies such as Guinness and W.H. Smith. Never mind the 34 books he had published.

Perhaps I shouldn’t be so pleased with myself for finally finishing this short, and hopefully entertaining post.

It warms my heart to know that the iconic illustrations of my childhood and no doubt the childhood of many have not been forgotten. They are the memories of when life was simple and carefree, where my only concern was should I ride in the English saddle today or the western?

Long live the Thelwell pony for forcing us to question our intelligence while the devilish creature outwits us all.

#horsewordnerd is dedicated to my mom, Genevieve Berry, who was my biggest supporter in life, no matter the endeavour. Thank you, mom.