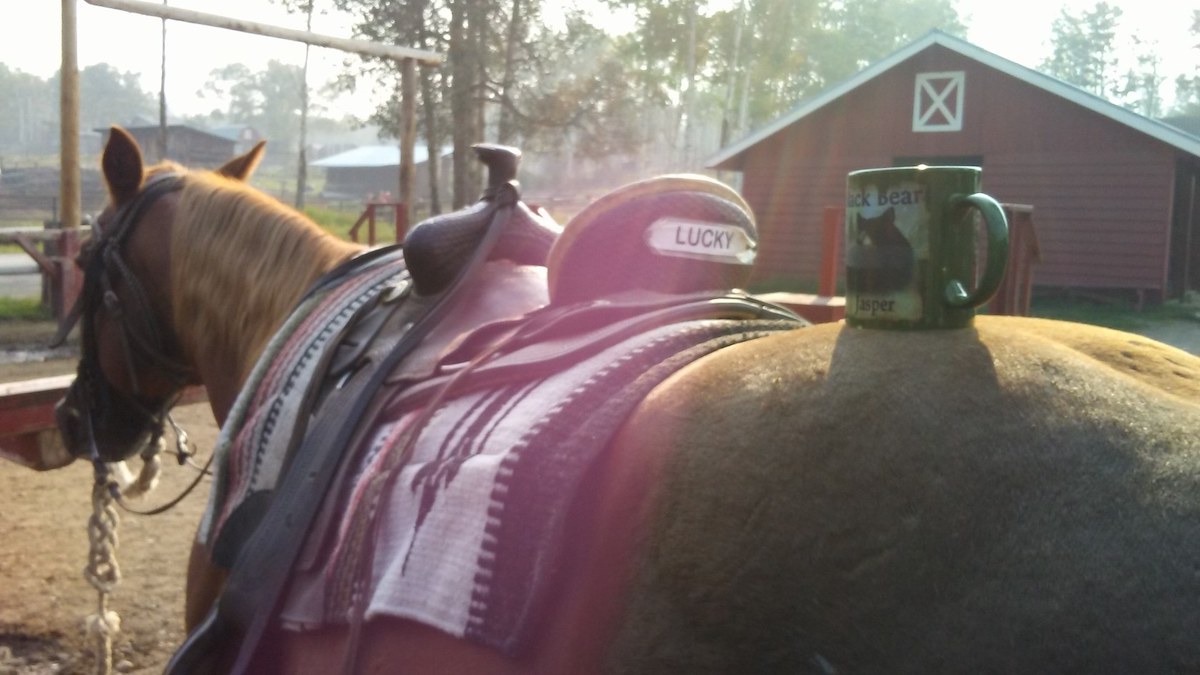 He’d been purchased some years ago from a Mennonite family.

When my boss went to see him, he was looking for something safe and reliable; he asked if Lucky was any good with children.

“Ah, yeah,” the owner purportedly said, “You usually get about four or five on at a time before they start sliding off.”

I met Lucky when he was living his dream career: as a trail horse in charge of carting around the stable’s littlest riders. A solidly built Quarter Horse with decent conformation, he looked like he should have been athletic…he was not. Lucky was one of the laziest horses I’ve ever met. He would alternatively drag his feet or straight-up refuse to move down the trail unless you attached a rope and ponied him. Then, he’d follow your lead horse happily—so long as his rider was a small child who weighed no more than his saddle (which, by the way, was miniature).

Despite his lack of work ethic, Lucky was one of my favorite horses at the barn. Firstly, he was incredibly cuddly, and would even give hugs (one of the few horses I’ve ever met who knew this trick). He was great company in the mornings: his butt was fat enough that I could balance my coffee cup on it without worry of it spilling, while I walked around and visited with the other horses or brushed manes. He was also reliable on the trails and unflappable in the face of scary obstacles such as bicycles, hikers, or bears.

Admittedly, Lucky was not a favorite amongst all the guides, due to one particular quirk. When giving pony rides around the yard (which we did for kids who were too young to go on a full trail ride), Lucky would occasionally stop and give his entire body a massive shake, sending the little kid on his back rattling between the cantle and the saddle horn. When he stopped, the stunned child would more often than not burst into surprised tears.

He never tried this with me, possibly because I kept him in a steady supply of bribes carrots and forehead scratches.

I wasn’t the only one who had picked up on Lucky’s penchant for sweets. He had several fans, including a local girl who would come to visit him every week, crying out “Lucky! Lucky!” as she ran up the path clutching fistfuls of apples and carrots. As soon as he heard her voice his ears would perk up and he’d drop his head to her level, gently munching treat after treat as she patted his nose.

It’s possible he adored her even more than she him.

In all my horse jobs, I don’t think I’ve met another horse that genuinely loved children as much as Lucky. Possibly he just associated them with treats or fond memories from his training. But whenever a small child came into the yard, his permanently annoyed, ears flicked back expression would transform. Eyes brightened and head lowered, he would step towards them in hopes of a pat.

I’m sure Lucky was bred with high hopes for his athleticism, maybe even a show career. But he’d found a much more important job: getting child after child to fall head over heels in love with horses. Fat, lazy, wonderfully kind and gentle: may we all be lucky enough to know a horse like him.