The Hidden History of Jingle Bells 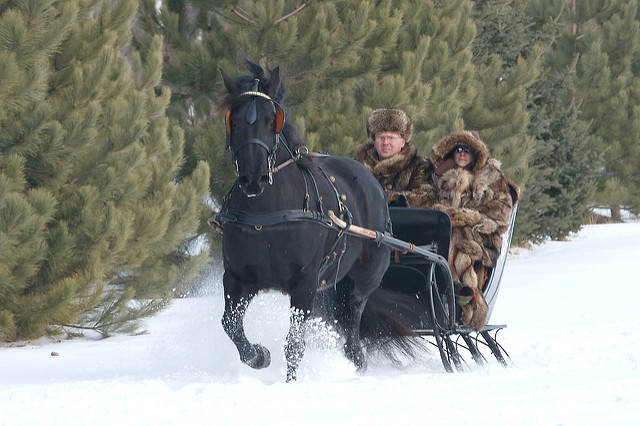 Now that I call myself an “investigative reporter” on all things horsey and of minimal importance, and since Christmas is upon us, I thought I’d take a deeper look into the song, Jingle Bells.

The wool has been pulled over our eyes since 1945 when Bing Crosby and the Andrew Sisters took the song wide. There are verses that have been hidden from us that involve drag racing, picking up girls, a high-speed crash and an unneighbourly man.

But we will get to that in a minute.

Jingle Bells is a Christmas favorite, but it was not written with yuletide merriment in mind. It clearly states in the song “sing a sleighing song tonight” and we have no one to blame but ourselves for this misunderstanding. The song, written 164 years ago, was a “sleighing song” and its jolly cadence mimics that of a trotting horse. These types of tunes were a thing in the 1800s, something akin to 99 Bottles of Beer on the Wall I suspect, only shorter.

Songwriter James Pierpont, J.P. Morgan’s uncle as it happens, was said to have found his inspiration for the song when, one winter’s day, he happened upon sleigh races held on the snow-packed streets of Salem, Massachusetts. So taken, he was compelled to write the little ditty that we all know and probably love or at very least tolerate.

Sleigh racing was a popular pastime during the winter months in New England, so popular in fact, local newspapers used to report on the winners, horse’s lineage and the racing conditions.

The drag racing scene, as it were, sounds like a bunch of bored teenagers getting into mischief. You got your girl and your one horsepower vehicle and off you go. If you wanted to win, the song suggests, “Just get a bob-tailed bay, two-forty as his speed” and “you’ll take the lead.” This is when my investigative instincts really kicked in, and after more digging, I learned a two-forty horse can trot one mile in two minutes and forty seconds.

Unclear if a “two-forty” horse would be considered fast today, I researched further. The first horse to trot a mile under two minutes was a standardbred named Lee Axworthy (1911-1918). As Lee Axworthy was a trained racehorse rather than a trained regular mode of transport, I’d say a two-forty horse was moving at a fair clip. The average horse, that is to say a non-trotter type, trots about eight miles per hour, whereas Lee Axworthy was going approximately 30 miles per hour.

Jingle Bells goes on and on about bobtailed horses and this is because sleigh racers had bobbed tails to prevent tangling with the reins and I think it may have been trendy at the time. Though, not being an overly trendy person myself, I admit, I am guessing at that.

The song’s original title was One Horse Open Sleigh, which makes perfect sense. These sleighs were called cutters and designed for two people to ride in and for one horse to pull. The perfect sort of vehicle in which to pick up girls. And while I find this part of the original amusing, I feel no need for explanation as the act of picking up girls is as old as time and has changed little, I’m sure, over the centuries.

Now, these jingling bells Pierpont wrote about, the ones on the bobbed tail, harness and sleigh were there, not as festive adornments but because it was the law. Heavy fines were issued if you didn’t “jingle all the way!” This type of research is how you zap the romance out of things by the way.

Since snow muffles the clippety clop of hooves on a road and since the sleigh rails make little noise, you were just asking for trouble without the jingle jangle of bells alerting oncoming traffic.

As for the crash, the only thing to learn there is that snowbanks have clearly been a problem for a long time. And the unneighbourly man probably hadn’t yet sensed the magic of Christmas.

And there you have it. We may have been duped, which lacks Christmas spirit, but we’ve all come away with a little more useless information than before we entered. That is my gift to you, and Pierpont’s gift is to have you “laughing all the way, ha ha ha ha.”

Dashing through the snow
On a one-horse open sleigh,
Over the fields we go,
Laughing all the way;
Bells on bob-tail ring,
Making spirits bright,
What fun it is to ride and sing
A sleighing song tonight

Jingle bells, jingle bells,
Jingle all the way!
O what fun it is to ride
In a one-horse open sleigh.

A day or two ago,
I thought I’d take a ride,
And soon Miss Fanny Bright
Was seated by my side;
The horse was lean and lank;
Misfortune seemed his lot;
He got into a drifted bank,
And we, we got upsot.

A day or two ago,
The story I must tell
I went out on the snow
And on my back I fell;
A gent was riding by
In a one-horse open sleigh,
He laughed as there
I sprawling lie,
But quickly drove away.

Now the ground is white
Go it while you’re young,
Take the girls tonight
And sing this sleighing song;
Just get a bob-tailed bay
Two-forty as his speed
Hitch him to an open sleigh
And crack! you’ll take the lead.