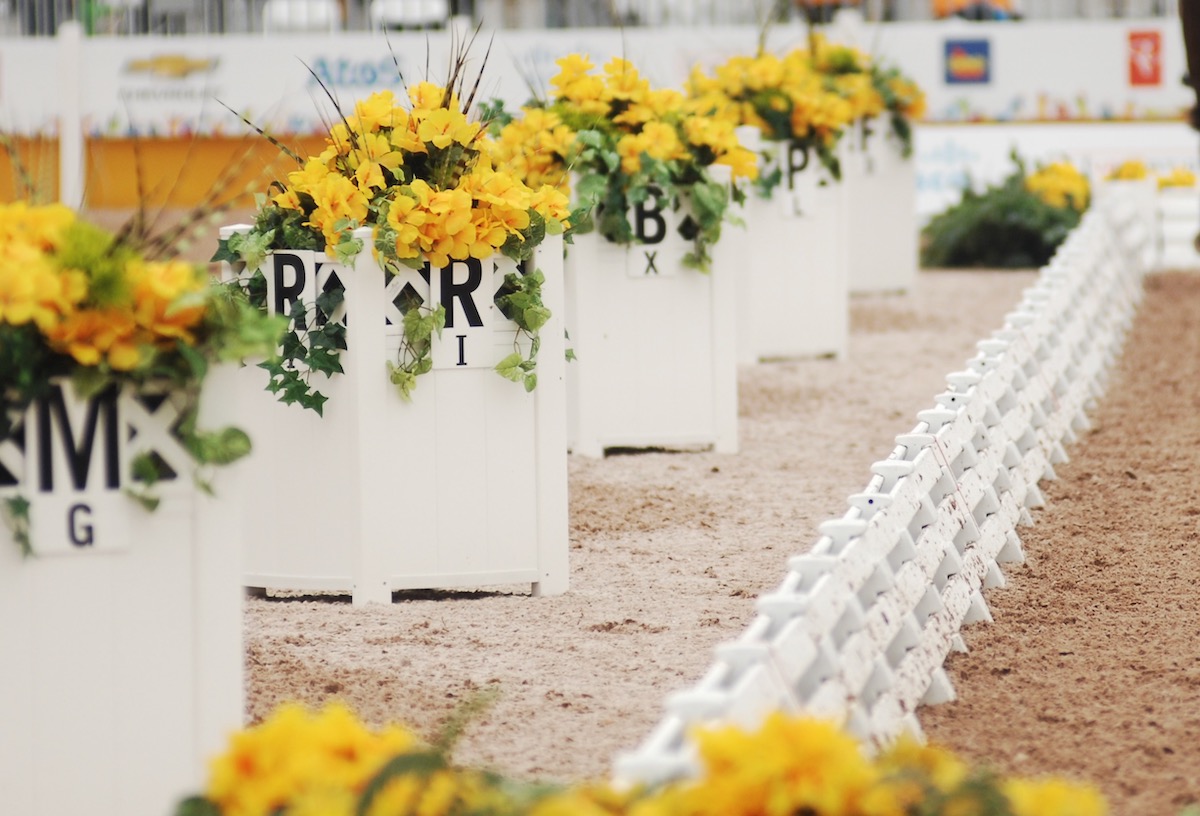 A – Enter at working trot

And from there, things get a bit chaotic, letter-wise.

For the love of all things horsey what do these letters mean and who on earth thought of them?

I’ve scoured the internet and found several different theories as to why we use AKVESHCMRBPF GIXLD in a 20×60 and AKEHCMBF GXD in a 20×40 dressage ring. I realize it looks like my cat has walked across my keyboard, but this is how we horsey folk insist upon doing things.

The letters indicate names of cities that the Romans conquered.

The letters represent the first initial of William Cavendish’s horses in the 17th century. Cavendish, aka, the first Duke of Newcastle wrote a book called A General System of Horsemanship in 1658, so it could be true.

If you Google “Royal Manstall” and search images you will find a lot of pictures of dressage rings and letters. This is probably because it’s the prevailing theory of how these random letters came to be.

It is believed that prior to WWI, letters were found on the Royal Stable of the Imperial German court in Berlin. It is thought these letters were used to dictate where grooms would stand, while holding their dawdling master’s horse. These letters were also thought to denote the rider’s role in society. Therefore, the groom holding a horse at K, was waiting for the Kaiser.

The courtyard of the stables is said to have measured 20x60m, which is just big enough for a little morning exercise for horse and rider and a great place for parade assembly.

You’ll notice C and the center-line letters are missing from the list, as they remain a mystery.

Some say the German cavalry is responsible for the letters because according to the German Cavalry Manual of 1882, it shows a diagram of a 20x40m indoor school with the letters ABCD in the four corners and EF halfway down the long side. These letters were indicators as to where movements should take place when training for mounted combat. Obviously, the six letters aren’t how we see them today and the ring is 20m too short.

We will stick with the German cavalry but this time the thought is that the stable barracks surrounded a 20x60m ring where the cavalry trained. Each barrack had a letter on it and those letters were used to indicate where movements should take place. Presumably, those letters read AKVESHCMRBPF. That makes for a lot of barracks surrounding a ring that isn’t that large.

Whilst I was down the dressage rabbit hole

I found a few interesting facts on the FEI Olympic history page.

1912 Stockholm – There were five jumps in the dressage test up to 1.10m. At the end of the test, riders had to point their horse towards a barrel that was rolling towards them and jump it, because why not? The rider could collect bonus points if they managed to jump the moving target with the reins in one hand.

1932 Los Angeles – First-time piaffe and passages were asked for in a test.

1936 Berlin – The Olympic dressage test consisted of 22 movements to be completed in 17 minutes, which would make for an exceedingly long day.

1948 London – The use of martingales, bearing reins, bandages, gaiters and blinkers were not allowed, though I’m sure many of us wouldn’t mind reinstating the blinkers.

1952 Helsinki – The first time civilian men and women were allowed to compete in dressage at the Olympics. (Women weren’t permitted to compete in jumping until 1956 and 1964 for eventing.)

1952 & 1956 Games – Lis Hartel of Denmark not only won Olympic Silver medals in dressage but did so whilst paralyzed below the knees due to having contracted polio at the age of 23.

1960 Rome – Judges conferred for 20 minutes after each test. While that happened, nothing else did, leaving spectators to chat amongst themselves.

Surprisingly, the first-time dressage letters were used in the Olympics was in the 1932 or 1936 Olympics, this is still up for debate. Either way, dressage has been a part of the Olympics since the 1912 Stockholm Games, which begs the question, how did they know when to do things?

I think the main takeaways here are that the Germans might have had something to do with the dressage letter business, which does make sense. And the history surrounding the strange arrangement of letters is just as confusing as remembering their order.