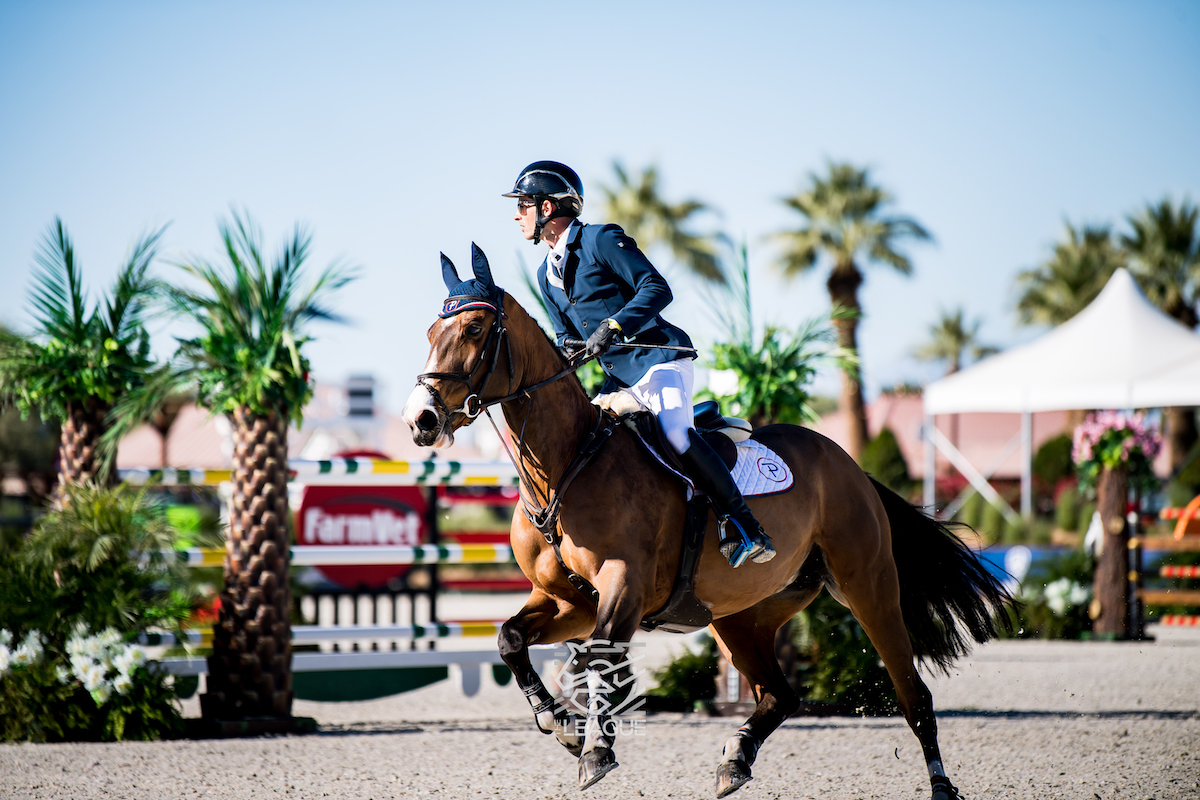 He thought Eye Candy’s Conor Swail (IRL) was getting a little bit too comfortable kicking it on the top of the podium. A little extra gas with the nine-year-old mare Cheilane de Blondel in the $72,000 Farmvet CSI5* 1.45m Winning Round at MLSJ Thermal II did the trick.

“I was talking to Conor and I told him that he needed a little humbling. He’s been winning way too much. He needed to take step over from the first place on the podium and let the other ones win for once,” smiled Bluman. The speedy pair stopped the clock at 36.12 seconds.

The Colombian rider must have had an unspoken agreement with Australia’s Rowan Willis, because he and Wellington Grey Goose snuck in just hundredths of a second ahead of Swail (37.18s vs 37.29s). So whether Swail wanted to move down a few spots or not, he was successfully dethroned by this duo. For now…

It was a serendipitous win. Bluman wasn’t even supposed to be at Desert International Horse Park this week at all.

“These two horses that I’m showing here this week are actually not part of my string. These are the horses that [Gerado Pascal] rides and was supposed to show this week. But he had an injury in his knee, so he called me up and said, ‘Listen, I already have this spot, do you want to show my horses?’

“I’m basically catch riding here…but I know the horse inside and out because I also train him a little bit, so I know them really well,” said Bluman.

You could say he jumped on the opportunity. Bluman’s not just showing the horses, he’s putting some top results under their belt. While Pascal might have been disappointed to miss the MLSJ Finale at Thermal at least he can rest (his knee) knowing he left his reins in capable hands.

He’s a Bluman after all. Cousins Ilan (COL) and Daniel Bluman (ISR) are fellow international riders.

As for Cheilane de Blondel, she couldn’t trot into the show ring fast enough.

“In the stall, she’s quite relaxed and easygoing. Once you get on, she’s all fire. She only walks at the beginning of the session. If you start trotting a couple of steps, you just got to trot and canter and trot and counter. And she only walks when you drop the reins and she knows she’s done.“

Today Cheilane knew it was a job well done, especially when Bluman dropped the reins and gave her a big pat on the neck.