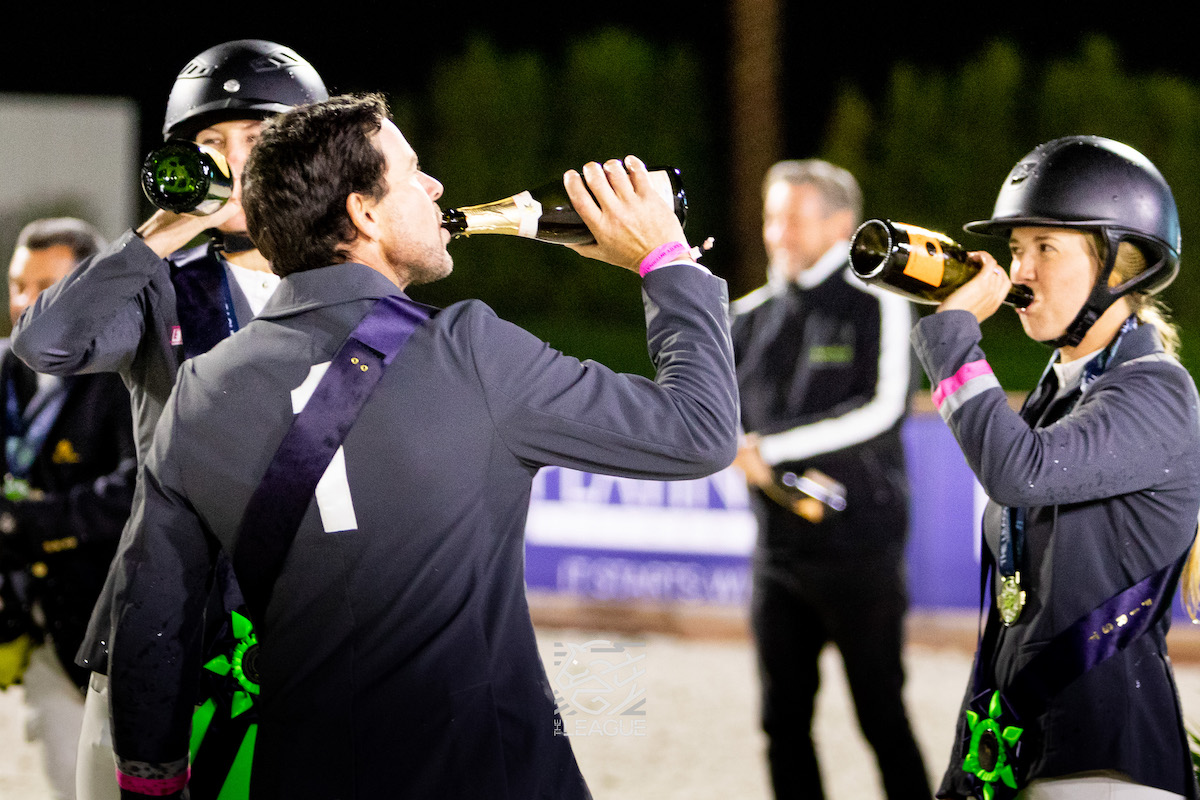 For a team whose name alludes to sweetness, Eye Candy talked a lot of trash over the course of the Major League Show Jumping (MLSJ) season.

They came into the MSLJ Final at Desert International Horse Park in Thermal, CA as the team to beat with 60 points, making them both an audience favorite and an MLSJ Team enemy. As if that wasn’t enough pressure, they had their team captain behind the scenes smack talking the competition in their name.

That’s right, the Eye Candy team member with maybe the most cutthroat competitive instinct was no rider, but owner Erica Hatfield. While her riders were quietly schooling their horses, Hatfield was busy playing a game of psychological chess.

It paired well with the competitive spirit of the Team Event. Her lengthy Instagram prose took jabs at the likes of the Lucky Charms and the Crusaders. Even A.I.M. United couldn’t escape her hilarious barbs. Perhaps it was the mounting stress of her impending post that rattled the riders of the other teams. But for her own riders it was motivation. They had no choice but to live up to the expectations she set for them.

“We’re coming in here with the pressure of leading. We talked last week there was a bit of trash talk about how some people were going to catch us. But thankfully we have the last trash talk now,” smiled Conor Swail. “So we’re able to sit up the top here and you know, we have bragging rights ’til next year. So things are good.”

But Swail was the last rider to be flustered by the weight of high expectations. Eye Candy qualified for the second round on a single time fault—the best team performance of the day in Round One. Amy Millar and Jacqueline Steffens laid down blistering rounds to secure the team’s slot in the Gold Medal Jump Off, and while Swail’s horse was tacked and ready to compete, he ultimately didn’t need to. Complications in the warm-up for the Crusaders, the team they were set to jump-off against, sealed the win for Eye Candy.

“We decided to leave me for the final round because my horse is supposed to be quick, but I don’t know. The speed that these these two went was phenomenal,” Swail boasted of his teammates.

“I watched [Diamond Devils’] Kristen Vanderveen go [in the bronze medal match], who’s a very fast rider, and Nayel [Nassar], who is doing extremely well also here, winning everything. They were both 52 [seconds], and I’m like, Oh, that’s going to be really tough for us and [Amy and Jacqueline] beat them by four seconds each—it was incredible.”

“I think Erica’s enthusiasm is really contagious, and I think it motivates all of us, and it raises the standard in a way where it’s exciting and you absolutely want to do your best,” said Steffens, who put down the fastest time of the night with 48.24 seconds.

Hatfield talked a big game all season but she admits even she had doubt creep in this morning, and had several posts saved in her drafts in the event of a less fortunate scenario.

“I really felt like we weren’t going to win. I was super superstitious about it today. I wrote just tons of captions how I was going to explain this pathetic loss,” Hatfield told the press conference, a gold medal ’round her neck.

“And then it just turned out that these guys are so awesome that we could win it.”

Jokes aside, behind the flashy Miss Eye Candy mascot, decorated social media posts, and colorful gear, there was a 5* competition to win. No matter how you look at it, it is the highest level of sport show jumping offers, and Eye Candy had serious athletes on their team.

“Being part of this team has been amazing through and through, and when it comes to trash talking, I mean, I think we’ve got the master over here [with Erica], so we always win that,” laughed Millar. “But we also take everything very seriously. Even the draw party’s very serious. There’s no game, and it’s the same with the team competition. We’ve put our best horses in. We put our best effort,” said Millar.

So like Swail said, they have bragging rights for a year and we can look forward to Hatfield’s social post about her incredible season as team owner.

Come next year, though, they’ll have to fight even harder to defend their trophy.