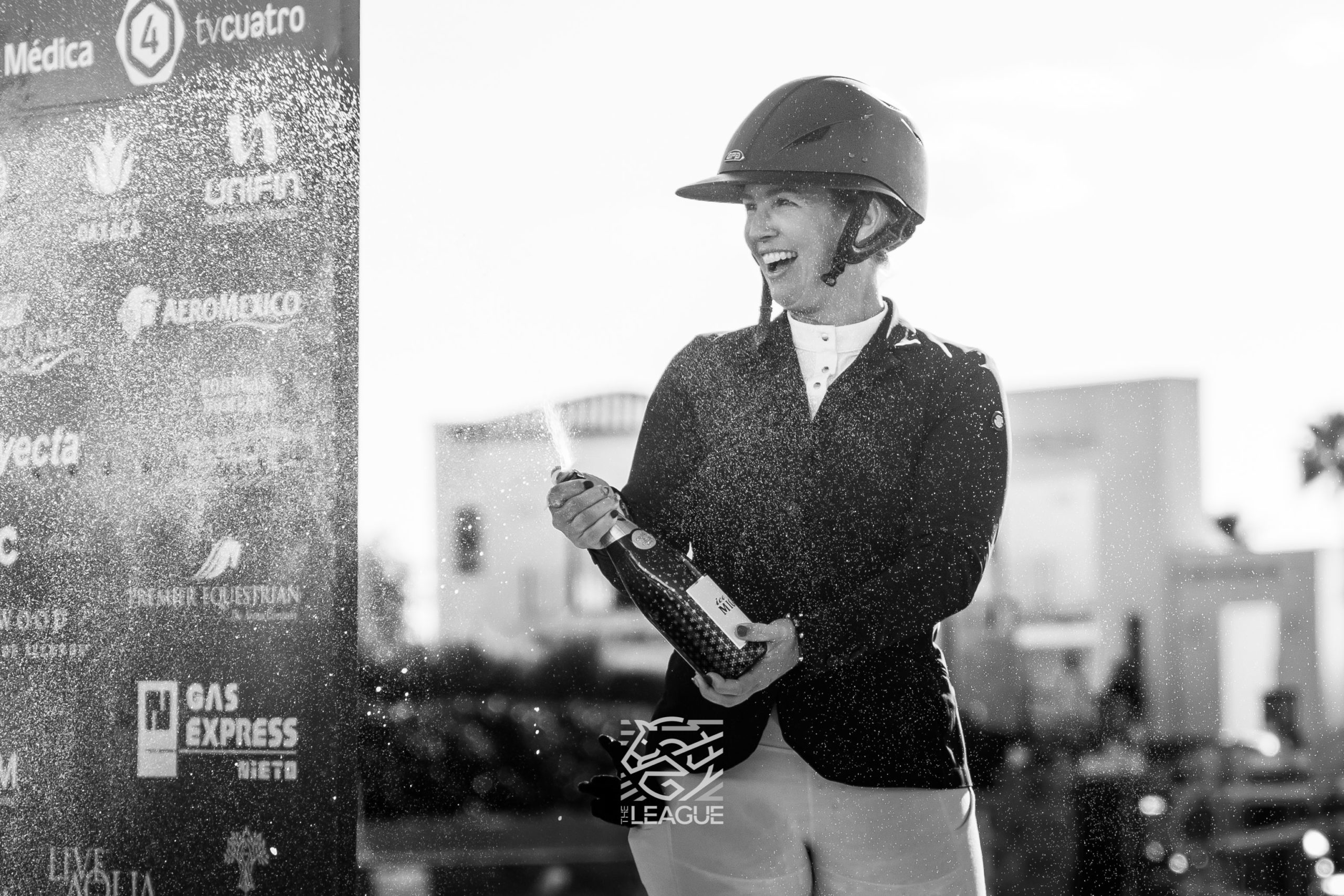 Riding Lazy, a horse she posted a quick clear with in Stage III at Angelstone, Bond had an uncharacteristic four rails before pulling up at the triple combination and retiring.

“That was my fault. I tried new bridle and it didn’t work,” shared Bond.

As a result of that unfortunate round, A.I.M. United, the team favored to win on Friday, ended up last on the day.

“I was really bummed. I messed up for the team. Letting myself down is one thing, but letting your team down is the worst feeling,” said Bond.

“There’s been times in my life, like when I came back from having [my daughter] Scottie, and I just was rusty. Normally, I see the distance 10 to 12 strides away, that’s kind of always been my thing. [After Scottie,] I was seeing them four or five strides out. And I was seeing so many choices. I was like, which one should I do? Is this the thing now? Can I just not see distances anymore?

“So [on Friday], I was just running to long distances and I’m thinking, is this what this is now? But then I was like, No, I had no horse. I felt I was pushing [Lazy] to just go somewhere and that if I added, we would have [jumped] straight up and down. So I was just running. And I was on the team, so I couldn’t pull up [without getting the team eliminated]. I was like, this is terrible. I just have to keep going and I’m going to fall off. I didn’t have a stirrup and I was going to the jump. It was really not good.”

Come Saturday, Bond was looking for redemption. She went back to a snaffle bit and jumped Lazy in the CSI5* 1.45m Winning Round, posting a double clear to finish fourth.

“Lazy is the type of horse where she doesn’t have a stop in her. She’s fearless and so careful. I didn’t know if hitting that many jumps behind [on Friday] was going to affect her. But fortunately, it was completely the bit. I just had too much control. She’s a horse that wants to feel like she’s in control.

“So when she went in and was so good, it gave me confidence. I felt like I got my bearings back and felt like myself again.”

Thirty-six combinations contested Guilherme Jorge’s course. The challenging 1.60m track saw the cream rise to the top with five combinations advancing to the jump off: Bliss Heers (USA) and Antidote de Mars, Paul O’Shea (IRL) and Chancelloress, Bond and Donatello 141, Conor Swail (IRL) and Count Me In, and Federico Fernandez (MEX) and Davidoff.

Second in, O’Shea and Chancelloress posted the first double clear, stopping the clock in a speedy 37.09 seconds. Bond followed and took over the lead with a time of 36.63s that ultimately proved uncatchable.

“I didn’t walk the jump off,” she shared.

“I try not to because I feel like it jinxes me, which is probably silly, but it’s my thing. So I had Conor Swail tell me the jump off and he counts every stride, which I did none of what he counted,” she laughed.

“Danny is one of those horses where you kind of have to just throw everything out the window and just run at the jumps and turn as fast as you dare. And strides don’t really matter with him because he adds really well. But he’s not a huge mover.”

Bond did nine strides in the lines, instead of Swail’s recommended eight, and made up the time with tight turns and a risk to the double.

“Donatello makes my job really easy. He comes out every day, he tries his hardest, and the bigger the jumps, the better, which is really fun when they build a legitimate 5* grand prix. I feel like when the jumps are big, he rises to the occasion. He is like, ‘Yeah, I got this’ and it impresses him a little bit.

“I really wanted to win this one,” Bond continued. “Once I was in the jump off, I knew that Bliss and Conor and Paul, they’re all super fast. But they’re all on kind of a similar type [of horse]. So I was I felt pretty good about it. I was like, Run!”