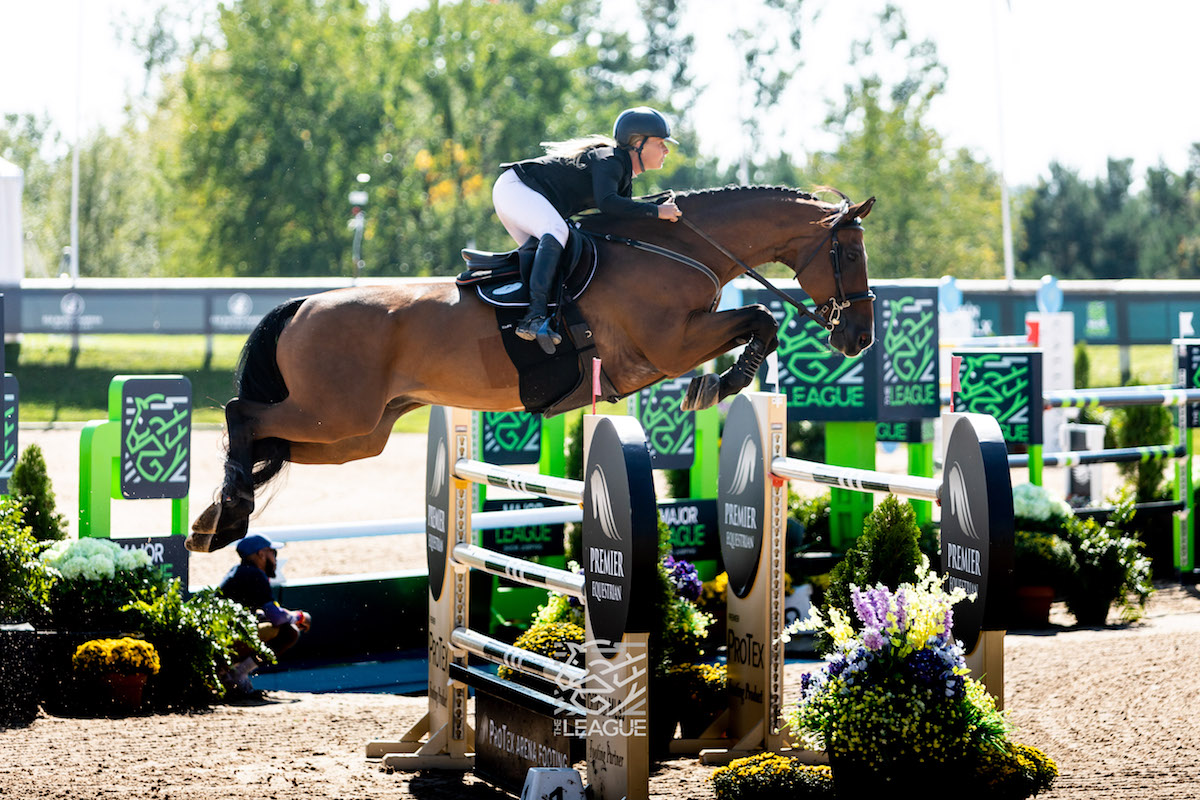 Kristen Vanderveen (USA), anchor rider for the Diamond Devils this week at Major League Show Jumping Phase 5, is known for her penchant for speed.

But her fleet-footed riding has less to do with going fast than it does with finding the right tempo.

“For me, it’s always been about rhythm. So whether you find the jumps leaving out a stride or adding a stride, as long as the rhythm stays the same, I feel like [the horse] can recover on landing,” said the 32 year old rider.

Leaving strides out in every line, including a risky leave out into the double combination, and turning tightly, she used Bull Run’s Risen massive stride and brave character to their advantage.

“He’s amazing. His character is fantastic. He’s always leaves the ground. He never second guesses me and he can be really careful while leaving out strides. And then where he’s really brilliant was being able to leave out a stride into a combination. I think it’s pretty special for a horse of his size to be able to do that and then still make the strides fit inside the combination.”

Honing that dance move a skill Vanderveen and the bay KWPN gelding practice on the flat.

“He’s 15 years old, so poles on the ground is how I really practice with them a lot. I try not to waste any of their jumps, but I do like to practice a line of poles set. I don’t even walk it most of the time. I just canter go down it, see how many it is, and then start to play around with the number.

“Same thing, trying not to change the rhythm. I’ll pick up a big canter from around the arena and do a leave out stride without changing the rhythm. And then I’ll try and put him together [and add strides without changing the rhythm]. But for me, I like to do it from the corner. So I try not to do the run ‘n pull or the go really slow and then goose them forward. I like to try and keep everything in a very smooth rhythm.”

Vanderveen’s partner since 2018, Bull Run’s Risen has seven times finished in the runner up position in international classes. Thursday’s win marks the his first FEI victory.

“I’ve been second quite a few times,” she share. “So [Thursday] with so many in the jump off, I had that in mind that I was going to do a few risky leave outs and really try and win this class.”

Vanderveen will compete Friday in the MLSJ Team Event and again in the MLSJ Gold Cup Grand Prix on Saturday. Tune in live on MLSJ TV.