Theo 160 is Growing by Leaps and Bounds 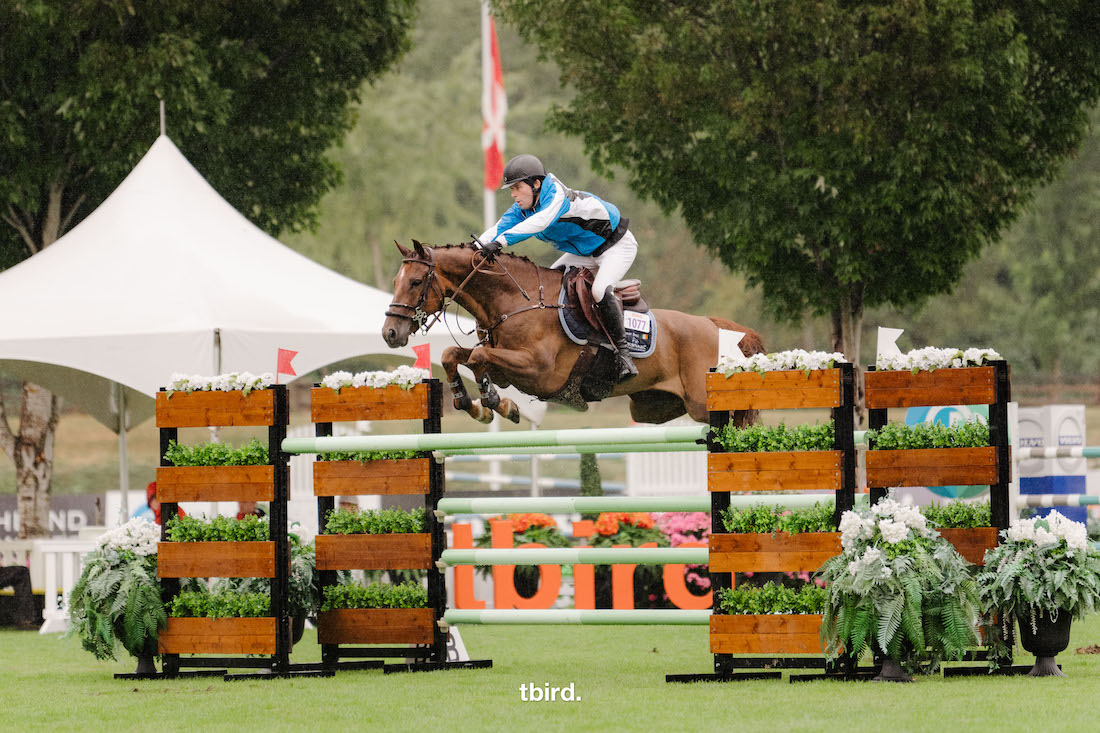 The small-but-mighty chestnut had only jumped one 1.50m class and had just one international win to his credit before last week’s Summer Fort Classic CSI3*. By week’s end, he had won two more CSI3* ranking classes and jumped his first 1.60m grand prix, with just one rail down.

He was just getting started.

With Swail already assured a victory thanks to a top jump-off ride aboard Gamble in Thursday’s CSI3* $50,000 Jump for Uryadi’s 1.50m, Theo 160 outdid himself yet again. Last to go in a four-horse jump-off—in the downpour of rain, no less—Swail outpaced…himself. And when he crossed the finish timers of Peter Holmes’ (CAN) track, he was elated, reaching down to pat his horse and punching his right fist in the air.

“It was just that sort of day,” Swail said. “It was wet and miserable. I thought I had a very good round with Gamble, and [third-place finisher] Lisa [Carlsen and Lightstream 2] nearly beat me. She had a great round.

“I was just happy to get [a one-two finish] again,” he added. “I was so thrilled with [Theo 160] and how he jumped, considering the weather, with the ground giving way a bit more. The times were quite close.”

With Theo 160, Swail’s jump-off plans require careful calculation. The smaller-strided chestnut often has to pass up opportunities to leave out strides but makes up time elsewhere. On Thursday, the chestnut caught eyes with a tremendous effort over the ATCO oxer across the center of the arena, effortlessly slicing a left to right turn over the fence.

“I just wasn’t sure [how the round with Theo 160 was going to go], because I knew I was going to take a few extra steps with him,” Swail said. “The eight [strides] between the first two fences was very awkward. [Student Vanessa Mannix and Catinka 25] had it down. With Gamble I did it well, but it was very difficult. With [Theo 160’s] smaller step, the nine [strides] came up nicely.

“He was very tight back to the oxer,” he continued. “His left rein is not his best rein, so that was not the best turn to go tight with, but he turned tight and jumped across it. The numbers made a difference, but I was comfortable that with the extra steps, we would still be okay.”

He might have more steps between the fences, but Theo 160 is making immense strides in his development at Thunderbird Show Park. In Sunday’s $100,000 CSI3* ATCO Cup, the gelding faced his biggest track to date, his lone rail the result of a green mistake at a 1.60m plank. The remainder of the course, it was impossible not to be impressed by the 1.60m rookie.

In four outings at Thunderbird Show Park over the course of the last nine days, Theo 160 has not finished outside of the top 10. As his win tally grows, so too does the chestnut’s confidence level, as technical tests appear less and less of a challenge for the gelding.

“The fact that the horse [came] here with limited experience at the 1.45m/1.50m level…because of the facility and the good course building, my horse has grown tremendously,” Swail said. “I think a big thing that needs mentioning is that this is a wonderful place to produce horses.”

Swail has acted on his belief, debuting numerous horses in FEI competition at the venue over the years. Perhaps that is part of the reason he is tbird’s winningest rider.

Another component is his natural, light and confidence-brimming style of horsemanship. Four of Swail’s top five mounts are currently competing without bits in their mouths. Theo 160 and Gamble, along with more experienced mounts Koss van Heiste and Vital Chance de la Roque, all show in hackamores.

“It’s working well at the minute, and I’m not going to change it now.”