The Pep Talk that Paid for Vanessa Mannix 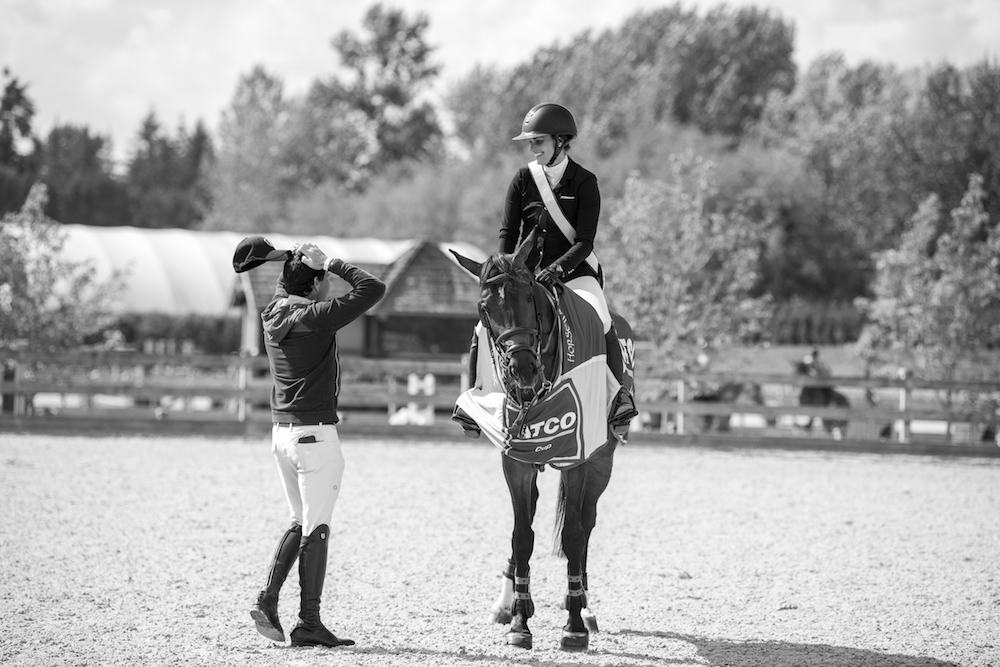 Vanessa Mannix and Catinka 25 have shared a lot of firsts.

Having brought the now 12-year-old mare up from the time she was seven, they’ve successfully logged all the milestones, from the Low and Medium Amateur-Owner Jumper divisions to the five-star grand prix level.

Sunday checked off another box for the pair: They won their first FEI grand prix against a stacked field of Canadian stalwarts in the CSI3* ATCO Cup at Thunderbird Show Park’s Summer Fort Classic.

“Catinka is such a special horse,” Mannix said. “She’s so incredibly smart. I’ve had her since she was seven, and she’s 12 now. I feel like we have such a depth to our relationship and understanding with each other. We started out in the Low and Medium Amateur [divisions], all the way up to her first 1.45m, her first ranking classes, her first [FEI] Grand Prix, and I rode her in my first Nations Cup last year.”

The ATCO Cup start list featured some of the venue’s winningest riders, from Olympian Tiffany Foster (CAN) to Mannix’s own trainer, Conor Swail (IRL), who had already won two three-star events with rising star Theo 160. Yet there was something about Mannix’s first round that gave the feeling she was on the cusp of a top performance. She’d been knocking on the door for a win all week, finishing third in both the CSI3* $37,000 George & Dianne Tidball Legacy 1.45m and the $150,000 CSI3* Kubota Canada Winning Round 1.45m and second in the CSI3* $1,500 tbird 1.35m.

Third of seven to jump-off, Mannix rode with the utmost determination. She and her mount started off committed to establishing an early pace, and it carried her throughout Peter Holmes’ (CAN) shortened track. Crossing the timers in an impressive 39.03 seconds, the grin couldn’t be hidden from Mannix’s face.

“I have to say, I came into the ring really committed to riding forward,” Mannix said. “I made a great plan with my trainers, James Chawke and Conor Swail. I watched the first two go [in the jump-off], but not too closely. I was committed to my plan.

“I wanted to get eight strides up the first line, which I think established a great rhythm, and then I just kept it smooth,” she added.

Mannix and Catinka went straight to the top of the leaderboard, but Foster, Ben Asselin (CAN) and Robert Blanchette (IRL) were still to come. None could catch her. Samantha Buirs-Darvill (CAN) and Baton Rogue ultimately took runner-up honors (39.98 seconds), with Blanchette and Chardonnay third (40.93).

“Conor gave me a pep talk before the jump-off,” Mannix said. “He said, ‘Come on, you can do this. Put your leg on and ride forward.”

Mannix’s relationship with Swail and Chawke cannot be discounted. In a sport where riders frequently change coaches, Mannix has ridden with Swail for nearly 15 years.

The trio might just have their best string to date. In addition to Theo 160, Swail is well-mounted with Asta Torokvei’s Gamble, the 11-year-old Koss van Heiste, the accomplished Count Me In, and the red hot Vital Chance de la Roque, who has won three international grand prix events since June.

Mannix, meanwhile has what she calls a “smaller” string, but strength is not always in numbers. In addition to Catinka, 10-year-old Balzane du Mazes did not finish outside of the top 10 in three FEI outings at the Summer Fort Classic, while new mount Kitting des Hausseurs jumped his first three-star grand prix in the ATCO Cup.

“I have a small string, but I’m enjoying focusing on the partnerships,” Mannix said. “Catinka is my main woman each day. ‘Kit’ jumped first ever three-star this week. We have a little bit of miscommunication in the triple combination, but then he jumped great [in the ATCO Cup]. He’s a bit green, and he’s a new horse to this level.

“[Balzane du Mazes] is 10. I call [the younger horses] the COVID babies, because they didn’t do a whole lot last year,” Mannix continued. “[Balzane] is not as experienced as you might expect her to be at 10, but I’m so proud of her. She’s found a new competitive gear.”

Mannix will be back for more at Thunderbird’s CSI3* Summer Fort Festival before looking toward September’s Spruce Meadows circuit.

“It’s been a really fabulous week,” Mannix said. “The horses are just off of a five-week break. They did well in the spring [and early] summer circuit, and I wanted them to get a rest before rest of the summer and fall. They came to this show off a five-week rest at the farm in Calgary, and they didn’t miss a beat.”