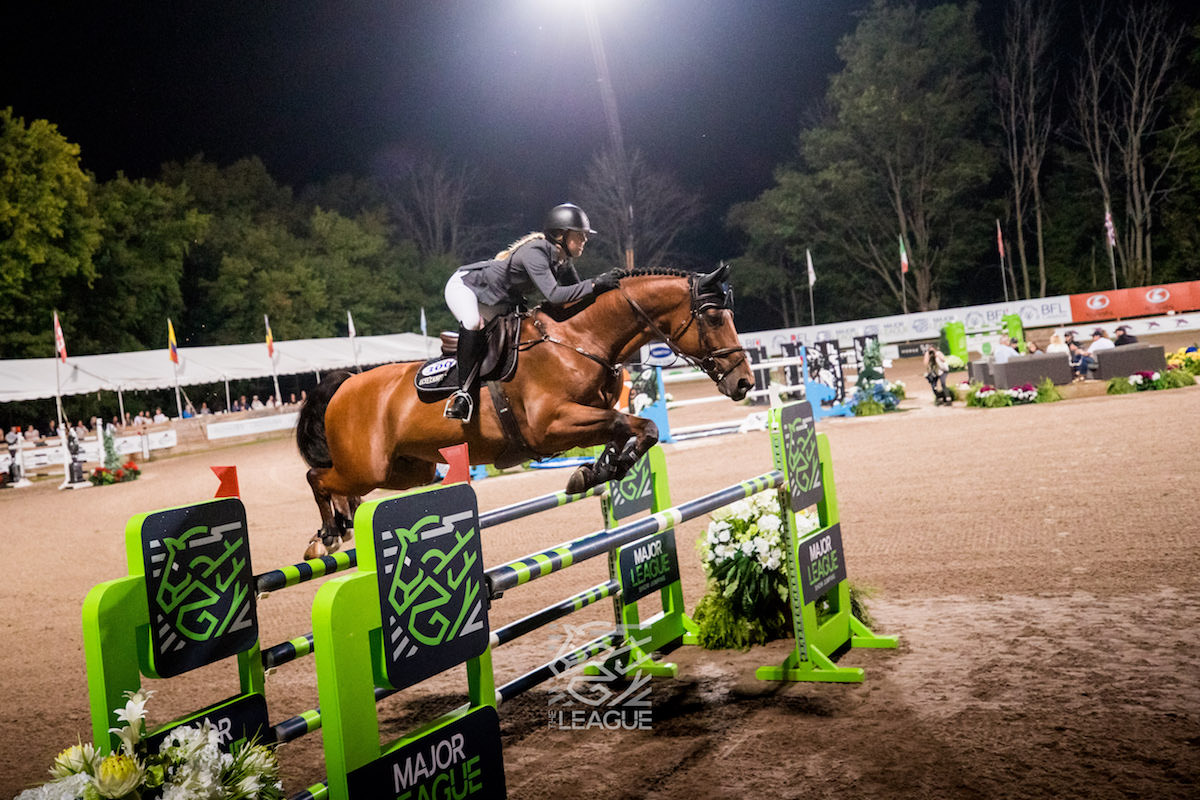 Major League Show Jumping takes the show on the road this week at Angelstone Tournaments in Toronto, Ontario, CAN. As the tour continues, we’re shining the spotlight on the fresher faces, the “rookie” riders in their first season competing with an international team.

Next up: Canada’s Jacqueline Steffens.

It’s been a breakout season for Jacqueline Steffens (CAN). The 26-year-old is part of the stable of riders for Eye Candy Jumpers and is competing for the Eye Candy team in a meaningful homecoming at Major League Show Jumping’s Angelstone Tournaments leg, just an hour from her hometown. It’s her first time attending the venue in three years.

“I think it’s an incredible thing for the sport to have the first five-star here. For me personally, it’s the first time in over a year and a half [due to the global pandemic] that I’ve been able to get back into Canada,” said Steffens, who now primarily resides in Wellington, FL.

While Steffens has benefited from pairing with experienced mounts like Cat Ninja—with whom she earned a top five finish in the CSI5* PFAFF Need for Speed Challenge last week at Angelstone—and working with respected rider and horseman Paul O’Shea (IRL), she has done well in developing the now 11-year-old KWPN gelding, Freaky. The bay was purchased off a video nearly four years ago and has come up with Steffens through the ranks from the 1.30m up to the five-star level.

A testament to the job she’s done with him, employer and Eye Candy team captain Erica Hatfield bought into the gelding. He’s rewarded them both by contributing to three consecutive podium placings, including two wins, in MLSJ team competition at Traverse City and Angelstone.

“Freaky has been a great horse to develop,” Steffens told HorseSport.com. “He continues to step up and exceed expectations. He is that very rare and special type of horse who is absolutely brave and will not stop at a jump under any circumstances, yet is also very careful and rarely has a careless rail down.”

Steffens’ background is diverse, having grown up in a non-equestrian family. She got hooked on the sport after a summer riding camp and worked a full-time riding job while studying molecular biology and genetics in college. The sciences were not for her, ultimately, and she has committed herself fully to a professional career in show jumping sport.

“Show jumping is a fascinating sport to me, because of the degree of accuracy needed to be successful,” Steffens told MLSJ. “It’s the pursuit of excellence, chasing those small differences that end up meaning a lot—and working with horses that just love their job.”