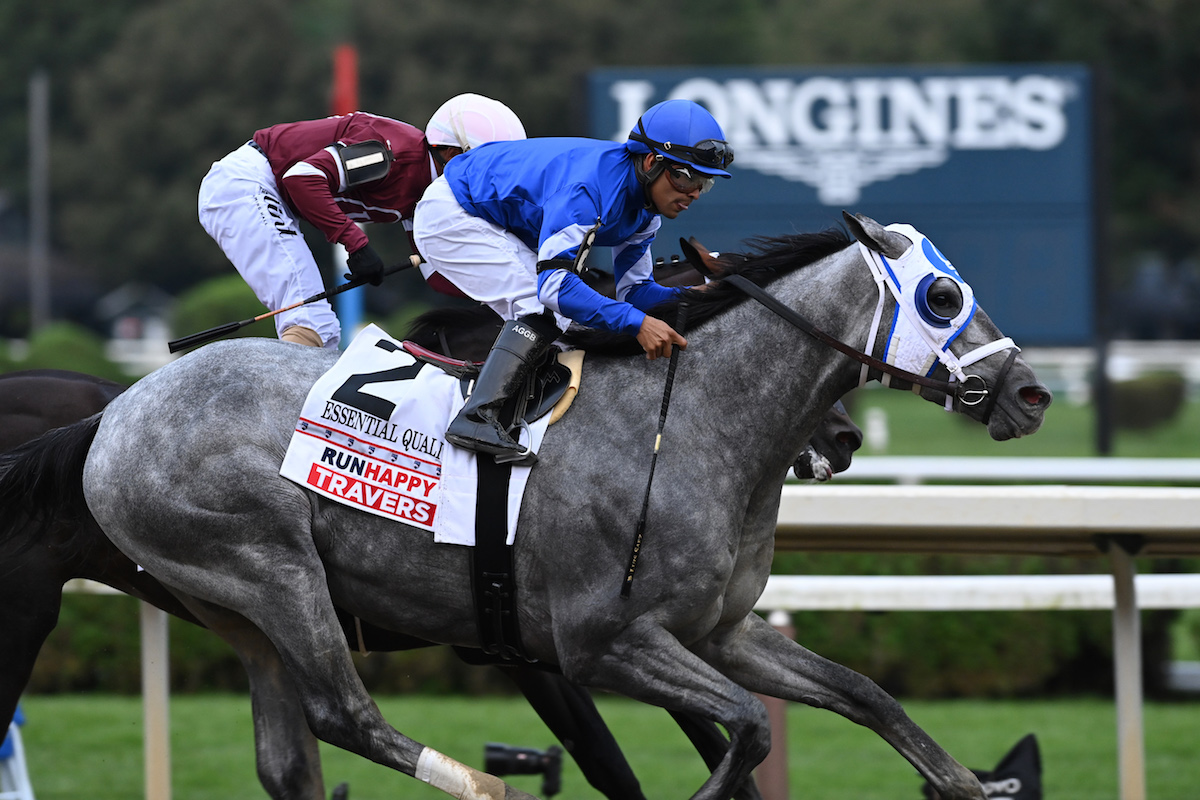 Godolphin’s Essential Quality all but locked up the Eclipse Award as Champion Three-Year-Old Male with a classy victory, wearing down a determined Midnight Bourbon in the stretch to win Saturday’s 152nd $1.25 million Travers Stakes (G1) at Saratoga.

Letruska can tentatively save a place on her trophy shelf for the Eclipse Award Champion Older Female hardware after her sassy half-length victory over surprising longshot Bonny South in the Personal Ensign (G1).

Firenze Fire? We’ll get to him in a bite.

It’s a usual Travers Day when some highly touted favorite succumbs to The Spa’s reputation as “The Graveyard of Champions.” But that’s what didn’t happen Saturday.

Shockingly, the favorites won all six G1 races on the 13-race Travers day card, but these were some of the most exciting contests in this or any year as challengers arrived with their “shovels” at the ready.

Oops, he did it again!

All he knows is how to win.

By now, fans of Essential Quality are accustomed to having to visit a nail salon after his latest victory. His Travers scare was no different.

Midnight Bourbon, runner up in this year’s Louisiana Derby and Preakness Stakes, darted from the rail under Ricardo Santana, Jr. to set the pace as expected with Essential Quality breaking well alongside in post 2. Essential Quality assumed his usual stalking position in second place. Miles D took up third position.

Midnight Bourbon extended his lead in the backstretch to over three lengths. By this time, EQ fans no doubt were yelling at their screens for jockey Luis Saez to pick up the pace.

As the horses rounded the second turn—a turn Saez and his mount missed to go wide in the Jim Dandy (G2)—Essential Quality and Midnight Bourbon turned the Travers into a match race.

In their May 1 Kentucky Derby (G1), both Midnight Bourbon and Essential Quality were bumped at the start. Both rallied in the stretch to finish sixth and fourth respectively.

By now it’s clear that a little extra distance is a lot of extra advantage for the gray son of Tapit.

“I know when Essential Quality makes his move, he’s going to fight for the lead,” Saez would say after the race.

The two leaders separated from the remaining five challengers by lengths, from themselves by a mere head.

Essential Quality’s stamina is his greatest weapon. As he did in the Jim Dandy, he moved in front of a game Midnight Bourbon by a head at the eighth pole, a lead he would maintain across the finish line after the mile and a quarter.

“Look at him…he looks like nothing has happened,” said Saez on the gallop out. “What a wonderful horse.”

“We thought there would be a lack of pace and there was,” explained the winning saddler. “Luis never let Midnight Bourbon get too far away from him.

“He’s a champion and he does what champions do. They win,” said Cox.

Remarked Saez of EQ’s now-usual, close-win style: “He always saves something for his next race.”

Ah, his next race. With the Nov. 6 Breeders’ Cup Classic at Del Mar over two months away, the trainer was quiet on plans for one more run or train him up to the Classic.

“We’ll enjoy this one for a couple of days, then it’s back to work for sure,” concluded Cox.

This femme is fatale

Some handicappers thought this was the race where a now-healthy Swiss Skydiver would put the Letruska hype to rest.

If anything, the five-year-old Super Saver mare burnished her reputation by having to finally fight off a serious challenge in the stretch run of the $600,000, 1 1/8-mile Personal Ensign from a horse other than Swiss Skydiver in the race-of-the-day on a day of great races.

Letruska captured the lead in the backstretch. By the top of the stretch, it became clear this would not be Swiss Skydiver’s day in a year that is turning out not to be her year. As the Daredevil daughter faded, 23-1 longshot Bonnie South went in hot pursuit of the frontrunner with Royal Flag and stablemate Dunbar Road close behind.

Letruska fought for a half-length victory with Bonnie South, Royal Flag and Dunbar Road all separated by a mere head. She sports a sterling 21:16-1-1 resume as the latest addition to the Breeders’ Cup Distaff (G1), courtesy of a “Win and You’re In” ticket.

“At the quarter pole, she [Letruska] put her ears up,” admired Ortiz, Jr. “She likes to be in front…she likes to fight.”

“To have speed, to be able to run long distances, to have a big heart is special,” remarked Gutierrez. “This is one of the best horses in the country.”

The trainer indicated there will be one more race for his speedy mare before shipping to California, the Oct. 10 Spinster (G1) at Keeneland.

It’s probably the weekend’s most tired cliché and viral video by now, but soooo apropos.

As 2-1 favored Yaupon and Firenze Fire battled it out in a side-by-side stretch run in the $600,000, seven-furlong Forego (G1), Firenze Fire decided taking a bite out of Yaupon’s cheek might be a tactical advantage. The repeated attempts at savaging—that’s the racing term for it—failed to keep the Uncle Mo colt from losing his cool, keeping his eyes on the finish line for a head win.

“That’s never happened to me before,” said Yaupon pilot Ricardo Santana, Jr. “It was scary, but I thought, ‘Just keep riding.’ ”

The savaging attempt has happened before both by and to Firenze Fire. In this instance, it may have cost him the race. Had he won, he likely would have been disqualified for rudeness—that’s not the racing term for it.

One farewell note from this race. Eight-year-old fan-favorite Whitmore, who gave trainer Ron Moquett his first Breeders’ Cup win in last year’s Sprint, was gingerly pulled up by jockey Joel Rosario after suffering a minor leg injury during the race. He was vanned off under his own power and not in distress. Connections announced after the race he was being retired immediately.

Thank you for the thrills old warrior.

Gamine is on pointe

Keeping a low profile as his Kentucky Derby win with Medina Spirit remains in limbo, trainer Bob Baffert was not in attendance as his barn’s reigning star, Gamine, danced her way to a 1 3/4-length win in the $500,000 sprint Ballerina (G1) under John Velazquez. The four-year-old Into Mischief mare punched her dance card for a return trip to the Breeders’ Cup Filly & Mare Sprint (G1) and a chance at consecutive wins.

Since Baffert figured out she prefers shorter distance, Gamine has won five in a row and nine of 10 starts.

Incidentally, Medina Spirit returned to the track Sunday for his first race in over three months, a win in the $100,000 Shared Belief Stakes at California’s Del Mar.

Eclipse Award Champion Three-Year-Old Male contender, Jackie’s Warrior, did nothing to diminish his credentials as even-money favorite in the $500,000 H. Allen Jerkens (G1).

The winner bested pacesetter Life Is Good, off the track after a five-month absence and a switch from the Baffert to the Todd Pletcher barn. The two followed the day’s theme, battling mano-a-mano in a long stretch run, with Jackie’s Warrior prevailing by a neck, the pair leaving the rest of the field nine lengths behind.

It was the seventh win in 10 starts for the bay son of Maclean’s Music, with no losses at distances of a mile and under.

Trainer Steve Asmussen, who also saddled Forego-winner Yaupon, said “…both ran their race and showed their Grade I ability against great fields.”

The pair will be pointed toward undetermined Breeders’ Cup races.

In the day’s only G1 turf race, favored Gufo and Joel Rosario put a head in front of co-favorite Japan in the $750,000, mile-and-a-half Sword Dancer.

Running for Ireland and trainer Aidan O’Brien, Japan under Ryan Moore got boxed in early. The son of the recently departed Galileo finally found a seam and made a gallant stretch run, but it was too late.

It’s not too late if you missed any of the Travers Day races at Saratoga. The Spa folds its red-and-white striped tents for the summer season next Saturday with the Breeders’ Cup “Win and You’re In” Jockey Club Gold Cup (G1) and a ticket to the Classic the day’s crowning event.