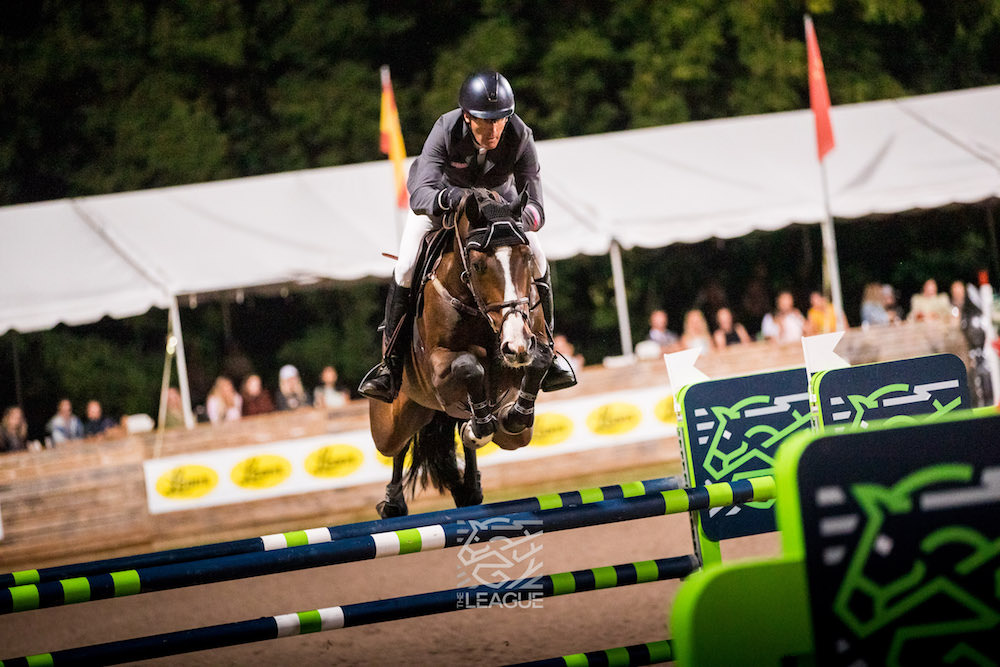 Captained by Erica Hatfield and represented by Canadians Amy Millar and Jacqueline Steffens, and Ireland’s Paul O’Shea, Eye Candy claimed their second consecutive $200,000 MLSJ Team Competition CSI5* victory of the inaugural season at Angelstone Tournaments in Ontario, Canada. The runners-up, again for the second time, were the Lucky Charms, with the Crusaders taking Bronze, also for the second time.

Let’s get to know the team atop the standings.

Team Eye Candy is made up of six riders. In addition to Millar, Steffens and O’Shea, the team includes Australian Katie Laurie, Puerto Rico’s Vasco Flores, and Japan’s Karen Polle. To date, only three team members have competed at an MLSJ event, however. Laurie was busy prepping then competing in her Olympic debut in Tokyo, while Vasco has a new and young string that he’s developing for the task.

But whether the lineup changes in future legs is Hatfield’s call. If the riders are willing and they have the horses to put in rotation, Eye Candy could conceivably stick with this winning formula all season long.

If it ain’t broke…

Not only are all three riders the same, the strategy for the order of go on the team has also been consistent—again, a team captain decision. There was one notable switch in the lineup. Steffens was the lead off rider in Phase 1 at Traverse City. Millar has taken over the honors in the two phases since—its a role she’s more than comfortable taking on.

“[Going first] actually doesn’t matter at all to me,” said Millar.

No, but really consistent.

We caught up with the team to talk horsepower:

Over three legs and six rounds of MLSJ team competition, Squirt Gun has yet to pull a rail.

“I was impressed with Squirt Gun over every single fence,” said O’Shea of his performance on Sunday. SAME.

Queued up for the gold medal match by his teammates, anchor rider O’Shea has been instrumental in bringing home gold for Eye Candy. His clutch rides in the gold medal matches against Diamond Devils in Traverse City and Lucky Charms in Toronto have twiced landed the team atop the podium. But don’t be fooled by his calm, collected execution. O’Shea didn’t always relish pressure moments.

“I certainly had a couple times in my career where I was under pressure and it did not work at all, so I had to think about it and the main thing I learned was to look forward to it and kind of relish the challenge, rather than think, ‘Oh I hope this doesn’t go bad.’ But with a horse like Squirt Gun, it’s a lot easier. He doesn’t want to knock a fence.”

Phase 3 of the MLSJ tour saw its first stop in Canada, hosted by Angelstone Tournaments. It’s the first 5* event ever hosted in Ontario and Steffens first time back in her home country since the pandemic brought global travel to a standstill.

“I think it’s an incredible thing for the sport to have the first 5* here. For me personally, it’s the first time in over a year and half that I’ve been able to get back into Canada. A lot of that credit goes to Keean White for getting approval to host it as an international sporting event. It’s been really exciting,” said Steffens.

Three is better than one

There are two more 5* events to come in Ontario during the 2021 MLSJ season. The tour returns to Angelstone again next week for three more thrilling days of 5* competition and is back again in September at Caledon Equestrian Park. Millar hopes it’s a sea change for the industry.

“We have great riders in Canada and at different points in our history have had great horse shows and great sport in Canada and always great sport at Spruce Meadows,” said the Canadian Olympian. “We need to inspire Canadians to want to get behind the sport in this country and bring it back to this level on a consistent basis and that’s what Keean and Matt Morrissey are trying to do and I love it. My family’s here, my friends are here, I want to be able to compete at this level here, so it’s a really great gift.”

Eye Candy is the only team with a mascot

Also a gift: Hatfield’s flair for marketing. In a sport better known for its tradition, the team captain and owner is bucking the trend. Hatfield has shown up at each leg of the tour with Eye Candy swag for the masses—from hats and bags to fans (so far). If you have the chance to see an event live, get there early and track down the Team Eye Candy mascot. Trust me, you can’t miss her.

Synergy is the secret to the Eye Candy sauce

“[Eye Candy] has what we call synergy in the sport. They make each other better. The team spirit is beyond words. The owner of Eye Candy is a fantastic lady and she gives them so much support and it’s just a winning formula all the way.”

And they intend to keep using it

“I think winning is fun so we want to keep this up,” said Steffens.