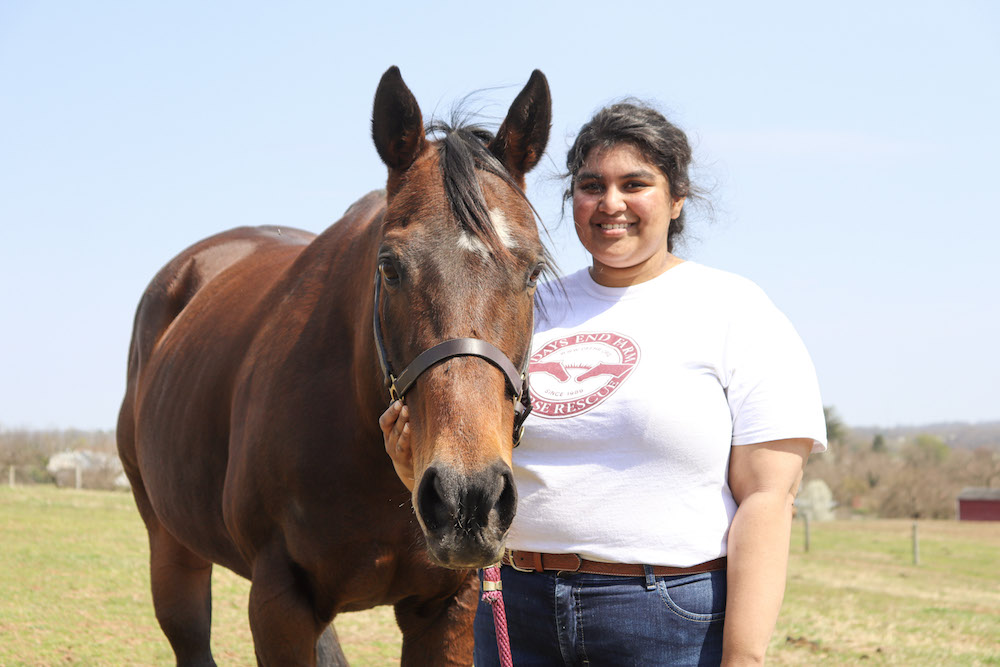 Though Days End Farm Horse Rescue (DEFHR) is nationally known for its rescue and rehabilitation efforts, not every horse at DEFHR was neglected or abused.

This is the case for Karisma, an 11-year-old Thoroughbred mare that arrived at DEFHR as a transfer from the Maryland Equine Transition Services (METS), an equine safety net initiative of the Maryland Horse Council that provides safe alternatives for owners needing to transition and rehome horses.

Though she had a knee deformity that meant she could never be raced, Karisma was a healthy, well-cared-for horse that had been in work and training and ended up in the care of her trainer after her owner passed away. According to DeEtte Hillman, Equine Programs Director at DEFHR, the trainer had an important decision to make. Having power of attorney related to Karisma’s next phase, she could have easily sold her.

Horses are rehomed an average of seven to ten times throughout their lives and Hillman notes that it’s not necessarily a bad thing. Horses are bought and sold for a variety of reasons, however, as a horse owner, keeping track of where a horse will land down the road once it’s sold is not always possible. In Karisma’s situation, the trainer and the caring people around her determined that the support of METS would help ensure that she ended up in a good home.

Because of DEFHR’s strong training program and reputation for the successful transition of horses in training, METS contacted the organization. Having the bandwidth for additional horses, the trainers accepted Karisma into the program.

However, once Karisma started her training under saddle in hopes that she’d be a pleasure riding horse, the trainers quickly determined that continually being ridden would create additional strain on her knee deformity and cause her to deteriorate quickly. Ultimately, they made the decision that she would be best suited as a companion horse.

Karisma’s transition story is indicative of how equine rescue—especially with regard to Thoroughbreds—has evolved. “In my early tenure at DEFHR, more than 50% of horses that came to DEFHR were off-the-track Thoroughbreds (OTTBs). That has shifted, and it’s now a rarity to get them,” said Hillman.

“Over the past number of years, many programs emerged that have helped transition OTTBs to new homes after leaving the track,” she continued. “The Thoroughbred Aftercare Alliance program, for example, has been vital in finding OTTBs safe, second careers.”

Other programs, such as METS, aren’t limited to Thoroughbreds and can go a long way in helping owners dealing with life-changing circumstances rehome their horses when they have no other options. Rather than put them up for sale, where security and safety might not be guaranteed, it’s possible for owners to select a program that provides extra assurance.

These programs are also helpful for individuals who simply take the time to consider what could happen to their beloved horses if they are no longer around. Hillman notes that DEFHR is often contacted by individuals planning their estates.

“It is always rewarding to hear that owners are thinking past their own lifetime by being really thoughtful and putting plans in place for when the time comes where they can no longer be there for their horses,” said Hillman.

Thanks to equine transition and safety net programs, Karisma has made herself at home among DEFHR’s herd and enjoys her weekly “spa days” with her sponsor, Anisha. If you are interested in adopting Karisma or other adoptable horses, please visit https://www.defhr.org/meet-the-horses/.