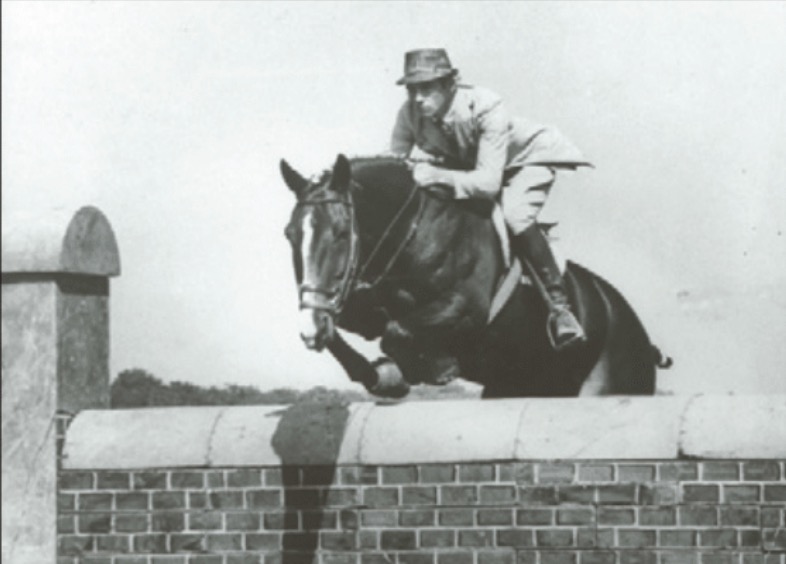 In the late 1950s, I had some “heroes” and one of the most important was Ben O’Meara. Benny was, basically, a genius! This is a very overused word, but in this case it is correct.

When I first met Benny, he had a few raggedy horses that he had bought from auctions. But Benny rode like no one else—sitting up, staying back, with a soft light seat. Reins slightly long, because his body was back. When jumping, he never interfered with the horse’s head and neck. Totally independent arms and hands. He stayed back to stay neutral! He organized a Center of Gravity where the horse’s hind legs would step under the horse and the front end would be light.

If they tried to get strong, Benny would allow them to pick up a little speed, then, while still staying back, keeping a light seat, slide them on their hind legs, right on final approach to the jump. And then give, or lighten the reins’ pressure. Did this work? YES! Have to time it right.

Very quickly, Benny was buying and selling more horses in a year than anybody. Maybe about 100! When asked how he made money with this quick turnover, he said “rope halters.”

Not many people knew Benny very well. He was by nature, a loner. People thought he was a tough guy. Benny liked that just fine. But, the truth is Benny loved his family, and a few close friends! He would quietly do wonderful things for them.

Benny enjoyed his “rapid like a jet” rise. Another thing he learned to love was airplanes. He started off taking sleeping pills when he got on an airliner, but then he thought, “Why don’t I just have one of these?” (A plane, not an airliner). He would then have a larger “radius of action.”

So he did; he got not one, but three in fairly rapid succession. The last was a World War II fighter, a P-51 Mustang. It ended up with a “mechanical” and crashed. Benny was 27 years old.

A pioneer in horse sport, Kathy Kusner was one of the first women ever selected to represent the United States Equestrian Team in Olympic competition and successfully mounted a legal challenge to become the first licensed woman jockey in horse racing. She is an Olympic and Pan American Games medalist, founder of Horses in the Hood, and an accomplished course designer, broadcast commentator, and writer.