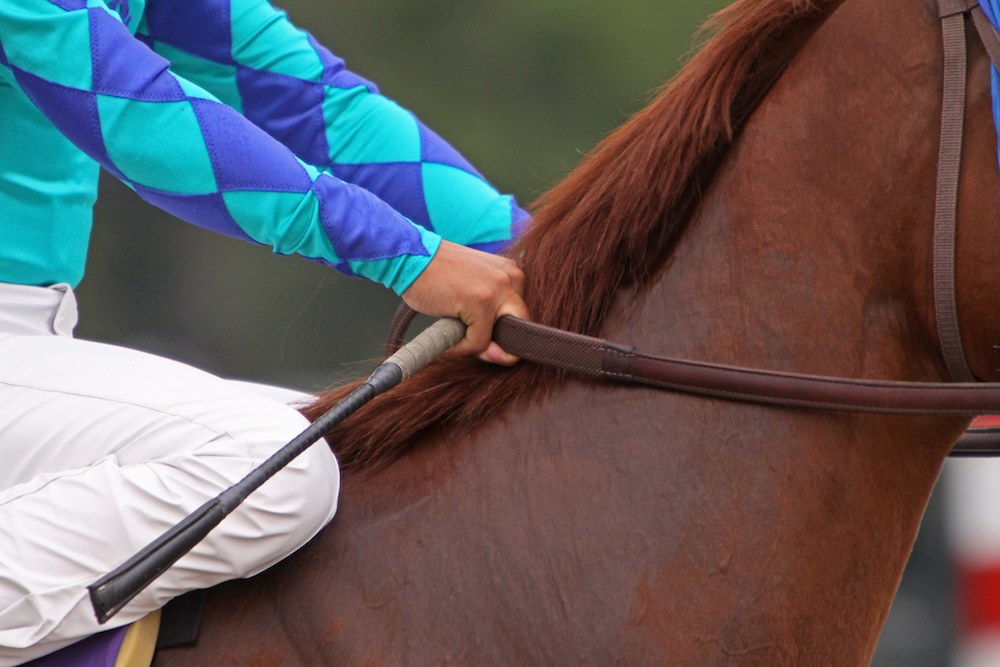 That may seem obvious save for the fact that, until a few days ago, it seemed possible there would not be enough jockeys willing to ride entries for the meet.

The reason is a new whip rule imposed by the New Jersey Racing Commission (NJRC) following its September  16 meeting that bars the use of the whip except for “safety reasons” to promote “equine welfare.”

“I understand that other states are taking a different approach by restricting the number of times the riding crop can be used to hit the horse,” Commission Chairwoman Pamela Clyne said during the meeting. “I understand that the New Jersey Racing Commission would be the first regulatory body in this country to prohibit the use of the riding crop, except when necessary for safety reasons, but it’s time to stop hitting our horses to make them run faster.”

Horses will be visually inspected throughout the meet at Monmouth and other New Jersey racetracks for evidence of “excessive or brutal use” of the whip. Sanctions could include a jockey suspension, fine or forfeiture of the jockey’s share of the purse if racing stewards determine “unauthorized use of the whip caused the horse to achieve better placing.”

The prohibition on whipping will apply to exercise riders as well as to jockeys during live racing.

The NJRC issued a statement explaining its reasoning when the new rule, thought to be the most restrictive in the sport, was imposed:

“The prohibition of the use of riding crops, except when necessary for the safety of horse or rider, will be perceived in a positive light by the general public,” the statement read. “The proposed repeal [of unregulated whip use] and new rules are of the utmost importance in adapting the industry to avoid the currently negative public perception of whipping a horse.”

The whip itself must also be changed. It can be no longer than four feet in length, with a “snapper” not made of leather or “unusual materials,” nor can it be knotted.

Jockey reaction was swift. At least six well-known local riders, including Joe Bravo, 13-time leading rider at Monmouth, said they would choose not to ride at Monmouth. “Under these conditions, I don’t think I can ride [this season] at Monmouth Park,” Bravo was quoted as saying in the Thoroughbred Daily News.

“They didn’t even speak to any of the New Jersey jockeys and ask ‘What are your thoughts?’,” he explained. “In today’s era, there should be riding-crop restrictions. I understand that. We have no problem with that. But to take the whip completely away? That’s crazy.”

While the NJRC may regard its new rule as addressing a problem of “public perception,” jockeys argue that the whip is needed to guide and control a 1200-pound animal at high speed and in close quarters. Many argue the whip makes racing safer for both horse and rider.

Internationally prominent jockeys voiced their opposition as well to the strict rule. New York-based John Velazquez, winner of last year’s Kentucky Derby and Breeders’ Cup Classic on Authentic, also said he would not ride at Monmouth.

Jockey Javier Castellano Tweeted his refusal to ride there as well:

The Jockey Guild challenged the new rule in court following its passage. The Guild sought a stay in its implementation on the grounds that jockeys, trainers, and horsemen and women were not consulted before the NJRC’s decision. On April 19, the court refused to grant the requested stay.

A movement among jockeys to boycott riding at Monmouth then began. Horseracing at the State’s four racetracks in general, and Monmouth Park in particular, is a leading economic engine for New Jersey.

Monmouth is home to the Haskell Invitational Stakes (G1), scheduled for Saturday, July 17. The 1 1/8th mile, $1.01 million dirt contest is a leading summer race for prominent three-year-olds. Wagering is expected to be brisk, even with COVID-reduced attendance. The race was won by Authentic in 2020.

A boycott could result in the loss of millions of dollars in revenue and hundreds of jobs in racing and related tourism for the region. It would be especially damaging in the wake of last year’s curtailed meet at Monmouth, and while the nation is still in the midst an ongoing pandemic.

“We are considering a list of options of how to deal with what we believe is a situation that could interrupt our meet and put us in a situation where we can’t open the track for racing,” said Dennis Drazin, chairman and CEO of Darby Development LLC, the operator of Monmouth, earlier this week.

Faced with the reality of a jockey boycott, Drazin went on to say the list of “options” could include a season ban for any slated rider who boycotted their race. Park officials also said they might seek alternate riders.

Drazin said Monmouth was in no position to prohibit implementation of the whip rule since it was being imposed by the State’s racing commission.

The tense standoff has gone down to the proverbial wire.

As racing gets underway Friday, all eyes will be on the 45 horses entered in the six races on the day’s card…and the 14 jockeys who are scheduled to ride them.