Tamie Smith Dominates the Leaderboard on Day 2 of LRK3DE 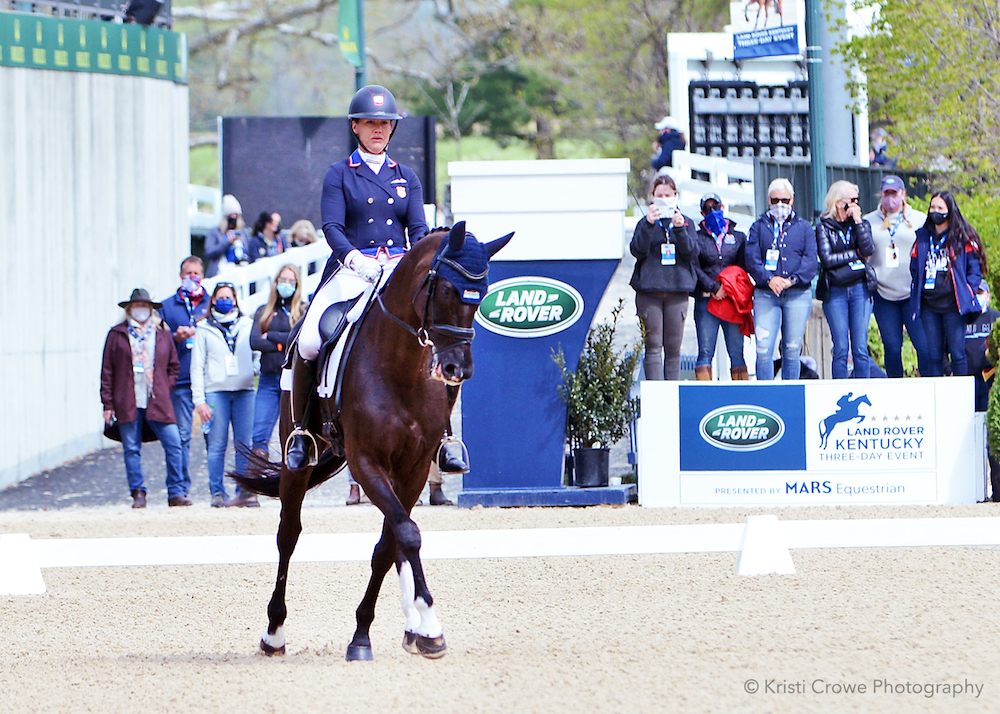 They say close only counts in horseshoes and hand grenades, and it doesn’t get much closer than this.

Tamie Smith (USA) came within a hair’s-breadth of knocking Marilyn Little (USA) out of the lead today at the Land Rover Kentucky Three Day Event, following the second full day of competition at the Kentucky Horse Park. Smith and Mai Baum laid down a 21.8 point score, to sit in second position behind Little with a mere 0.1 of a point separating their scores.

For the uninitiated, that’s less than a second’s worth of a time fault, less than one stadium rail (should everyone miraculously finish clean and fast on cross-country), and a heck of a lot less than a jumping penalty on Saturday’s cross-country course. Smith is also sitting first and third in the four-star competition running concurrently this weekend—let’s hope she’s good under pressure.

The second half of the five-star entries completed their dressage tests Friday, and as expected there was a fair amount of movement in the leaderboard. But none were able to best the record-setting score of 21.7 points earned by Little and her exceptional mare RF Scandalous on Thursday.

Current world number one, and two-time Kentucky defending champions, Oliver Townend (GBR) and Cooley Master Class were able to hold onto their top three position (current score of 24.1pp). Townend rode his second mount, Ballaghmor Class, to a score of 26.5pp to also sit in fifth position heading into cross-country. Filling in the gap in the top five placings is Boyd Martin (USA) with the compact and tidy Tsetserleg TSF, sitting in fourth position on a score of 25.4pp.

Smith admits to being happy and excited both with the performance of her partner, and about their prospects for Derek Di Grazia’s cross-country tomorrow. She also realizes, however, that there’s a lot of jumping yet to come before the final ribbons are awarded on Sunday.

“I think he knew it was a big day today,” said Smith of her partner Mai Baum, competing for the first time at the five-star level. “He was really nervous and it was so nice to have him go in that ring and do so well.

“But it doesn’t matter what you get on the first day—it matters what you get on the last day,” she said almost ruefully. “There’s a lot of technicality on Derek’s course and you and your horses have to be focused. Just when you think you’ve gotten through [the worst of it] then at the end there’s still more.

“I feel it’s very much a course that suits my horse. He is a big, galloping, naturally fast horse. I feel very prepared. You can see where the sport is going—you’ll need to have a really bold, brave, big-stepped horse that is also really rideable. There are a lot of combinations that will really make you think.”

Erik Duvander, chef d’equipe of the U.S. eventing team made a point of talking about both the depth of talent in the international field, and the strength of Di Grazia’s course as a test of skill.

“Having the opposition here from Europe is fantastic, it puts the pressure on our riders,” he commented during Friday’s competition. “When I first walked the cross-country course I thought it was one of the biggest tracks Derek has built. If there are any holes in your skill-set they will for sure show up.”

At the conclusion of the 4* dressage earlier in the day, a new leader had taken over first position, breaking up Thursday’s three-way tie at the top. Tamie Smith (USA) and EnVogue scored a 25.4 having produced a flowing and accurate test.

Canada’s Colleen Loach and Vermont scored a 27.0 to sit in second with her relatively green (and incredibly tall at 18.2 hands) partner, and the trio of Doug Payne (Starr Witness), Liz Halliday Sharp (Cooley Moonshine) and Tamie Smith with her second ride (Danito) are now tied for equal third place still on 28.1 penalties heading into Saturday’s sure to be challenging cross-country phase.

Five-star cross country starts at 8:30am Saturday, with four-star to follow.

Feature image: Tamie Smith (USA) and Mai Baum are 0.1 of a penalty point behind Marilyn Little and RF Scandalous on the leaderboard heading into Saturday’s cross-country phase. ©Kristi Crowe