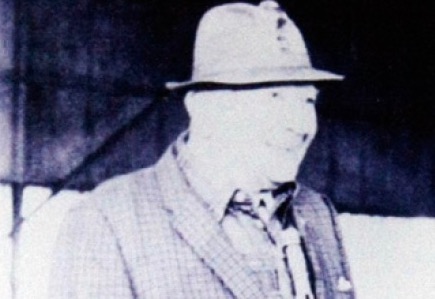 Gordon Wright, born in Goshen, Utah in 1903, started his horse career as a cow-puncher and rodeo rider, first in Utah and later in Texas.

After a stint in the cavalry he came East in 1927 with Fred Beebe’s World Series Rodeo and saved enough money from riding broncs and bulls to buy a home in Bronxville, N.Y. and establish a horse business in the old State Trooper barracks in New Rochelle.

By the 1930s he moved his establishment to Saxon Woods in White Plains, later renamed Secor Farms, and remained there for some four decades, running innumerable club and recognized shows, training hundreds of horses and riders of all ages and degrees of skill, and earning recognition for his own riding skills on such jumpers as Bartender, Sonny and Lew Dunbar as well as the brilliant show hunters Dalchoolin and Naute Mia.

Wright produced more Maclay winners than any other trainer of his era, his pupils including Archie and Hugh Dean, Bill Steinkraus, Victor Hugo-Vidal and George Morris. However, it was perhaps as a clinician that he had the greatest influence, for Wright virtually invented and then popularized this form of instruction, his travels taking him across most of the United States and to Europe as well.

Wright volunteered for the cavalry during World War II and graduated from OCAS at Fort Riley, where he remained as an instructor until the Horsemanship Detachment was disbanded. After the war in 1949, wearing the uniform of a reserve officer, he was the sole representative in the National Horse Show’s international classes at New York, the Army team having been dissolved following the 1948 Olympics.

The following year he was a key figure in the formation of the International Equestrian Competition Corp., precursor of the USET, which took over the United States’ international representation in 1950. Wright’s influence as a teacher was also spread through his writings—he penned or edited seven books, including a “civilian” revision of the U.S. Cavalry School Manual.

Outside the show ring he was a devoted foxhunter, first as a member of the Rombout and Golden’s Bridge Hunts both before and after World War II, and later as Master of his own private pack in South Carolina, where he maintained a home in his later years. By his death at the age of 87 in 1990 he was universally acclaimed as one of the most influential horsemen of his generation.