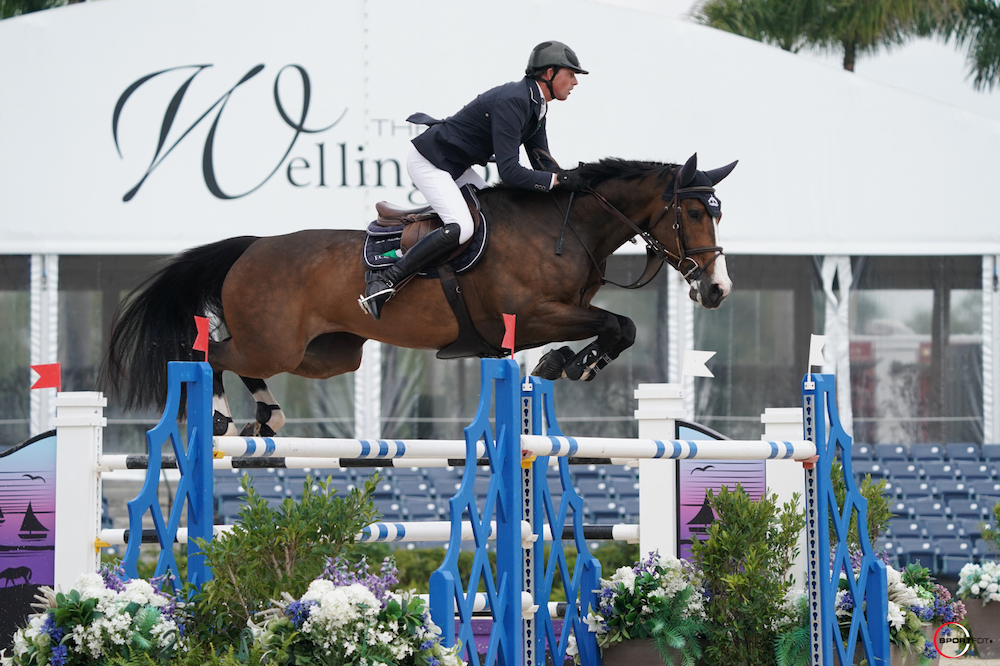 Ginger-Blue, aka “Cookie,” and Ben Maher (GBR) rode to their first ever international 1.50m victory on Friday.

The 10-year-old Dutch Warmblood mare, owned by Jane Forbes Clark, topped a starting field of 93 in the $37,000 Adequan® WEF Challenge Cup Round 10 CSI3*. Fourteenth in the starting order, the pair were the first to master the Michel Vaillancourt (CAN) designed track.

“I thought it was a big enough course for her,” said Maher. “It’s tough here at WEF because the CSI3* weeks are very competitive, and the track is probably a lot bigger than a typical three-star grand prix qualifier. I think that proved it with only nine clears out of 93 horses, so it was clever course building and quite technical in the middle [of the course].”

First to return for the jump off, Maher and the bay mare paved the way to a clear effort in 39.66 seconds. Six other combination tried to catch their time.

“It was a long day; I think she jumped three and a half hours ago and thought it was dinner time,” Maher laughed. “It was difficult to go first, but I rode the plan, and fortunately for me I forced the others to make mistakes.”

Cookie has been in Maher’s string for two years but has limited experience at the 1.50m level.

“She’s still learning a lot,” said the world #5. “We didn’t jump anything last year at all due to my back surgery and then COVID, so she really is behind for her age. She’s very careful and has all the ability; she just needs the experience. I’m hoping with that kind of course today she walks back to the stable feeling confident in herself and we can really build on this kind of result because I think there’s a lot more to come from her in the future.”

They’ll have the chance to put that confidence to the test come Sunday’s $137,000 Horseware Ireland Grand Prix CSI3*.

“We’ve done a lot of smaller classes to build her up,” said Maher. “Hopefully now we’re ready to go, so I’m really looking forward to Sunday.”