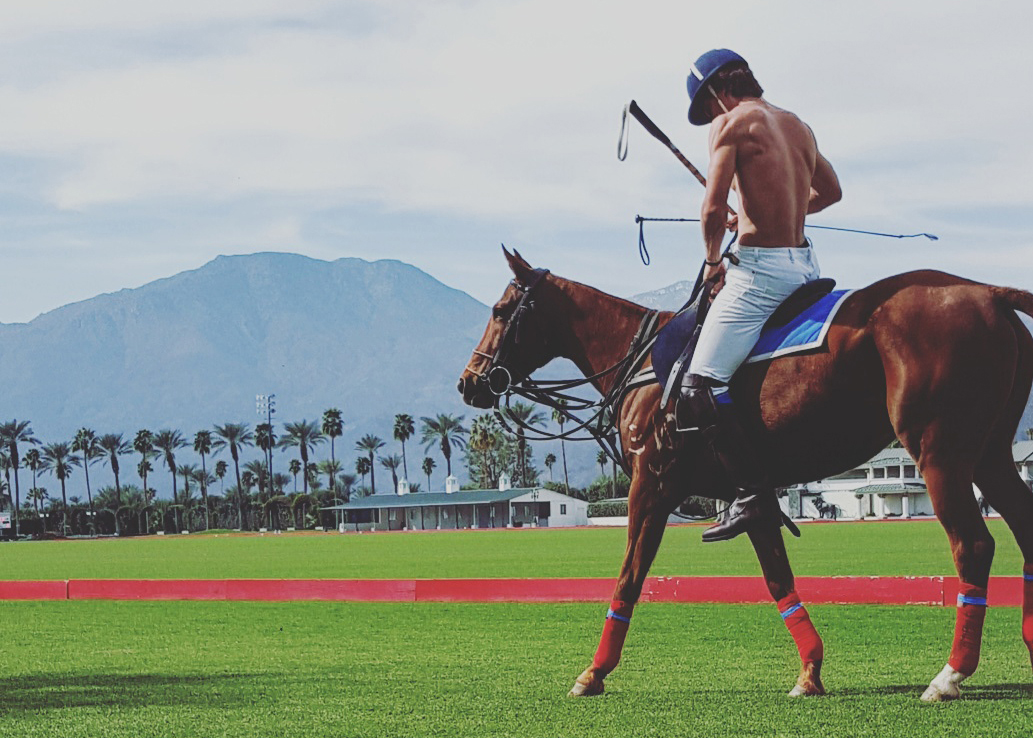 Several roached maned horses watched as I walked towards the shed row barn. I couldn’t see anyone, which had me checking the time and feeling awkward.

“I’ll be right with you,” I heard a voice say from inside a stall.

The people in the neighbouring barn were staring, I was out of place and everyone knew it. “No problem,” I said and turned my attention to one of the horses.

“You must be Rebecca.”

I turned to see a 20-something Argentinian man stepping out of a darkened stall. He was tall, olive-skinned and sinewy with a pleasing smile; his name was Francisco.

His thin white t-shirt, though loose-fitting, did little to hide the muscles beneath and his jeans sat freely on hips with no belt to control their direction. His hair was long and dishevelled in a purposeful way, his rugged look was effortless, and his description writes as a cliché.

I stared, struck with a sudden feeling of inadequacy.

This was a surprise gift from a friend of mine. Not the chiselled man but rather the polo lesson he was paid to teach me. His looks were a bonus, and the scenario was feeling like the opening pages of a Jilly Cooper novel.

Growing up my mom told me, “Always put on a little makeup, you never know who you’ll run into.” For years I heeded this advice but never ran into anyone that had me grateful I took the time to scribble on eyeliner and over the years this habit, regretfully, faded.

As I plucked my shirt away from my mid-section, I found myself in an unfamiliar position of power. I’d spent most of my life with horses as a working student. I was uneasy with the fact that Francisco was essentially working for me. I asked if there was anything I could do to help but he swatted the suggestion away with a smile and said, “No, you’re the boss.”

So, I continued to stare.

My ride for the day was JW, a chestnut Thoroughbred cross, standing about 15’1, with a roached mane and a cranky disposition. He was put in a purple nylon snaffle bridle with a beaded browband. “It’s the perfect bridle because it’s girly,” Francisco said with a wink, which made me feel about 12. I was annoyed with myself for being so easily swayed by his masculine wiles.

The bridle came without a noseband, but also uncharacteristically without a throatlatch. I wasn’t convinced it would stay on but not wanting to question his know-how, decided to risk it.

JW was led out of the barn and placed in front of me. Francisco, not being a middle-aged woman, but rather a swarthy young buck, seemed to think I had the capabilities to mount from the ground.

“I can’t get on from here,” I said, my age and lack of agility showing. Though JW wasn’t a tall horse, I knew better than to challenge the structural integrity of my jeans and was unwilling to demonstrate my inflexibility.

The people from the neighbouring barn gathered outside one of their stalls and I knew at once that many a lady has found herself at Francisco’s barn ill-dressed and unprepared. The neighbours were waiting for misfortune to befall me.

Francisco went in search of a mounting block and came back with an insultingly sturdy chair. He placed it under the stirrup and tested its stability. Once convinced it would hold, he nipped to the offside to put weight in the other stirrup, presumably to prevent me from sending the saddle spinning.

Never have I been more trepidatious to mount a quiet, stationary horse than at that moment.

Thankfully, I managed to get on without incident.

Francisco pulled his horse from the stall and tacked him up in jig time. Polo wraps were put on with precision and it was clear he was more than just good-looking, he was a horseman, who, despite doing away with throatlatches, cared for his horses.

I watched as he grabbed two polo mallets and stepped on his maneless horse with ease. I supposed polo players don’t rely on manes for anything. I view it as a lifeline.

As we rode away, I turned back to see my sturdy chair still in place between the two barns, a symbol of inflexibility and though the thought didn’t appeal to me at least I was comforted in the knowledge that I know how to ride.

While we hacked toward the practice field Francisco handed me a mallet, which I took with the eagerness of a child and watched as it swung from my hand like a pendulum. It was heavier than imagined but once I came to terms with the weight I began swatting at flowers as we ambled past.

A small white ball sat alone in the vast practice field and Francisco picked it up with his mallet and bounced it around on the end, as a tennis player might with a tennis ball and racquet. Part warm-up and part bravado? It was hard to know but if I had any doubt in his ability as a player it had vanished.

After a short demonstration on how to hit the ball and not JW in the face, I was allowed to walk on and try to hit the ball, with Francisco following close behind.

My first four attempts had me swinging haplessly at the ball, my years of dressage training hindering a seemingly simple task.

“Lean over,” he suggested.

It felt like a Pony Club game, but I leaned over as far as I dared.

“Lean over more. Put your weight in the right stirrup. Grip with your left knee.”

It was a ridiculous proposition and went against everything I knew. But once I was brave enough to lean over the precipice of JW I managed to hit the ball.

Brimming with confidence and bored of walking, I decided to bypass the trot and move straight into canter, much to Francisco’s delight. “Yes Rebecca, let’s go fast,” he said still following giving instruction and praise.

“You’re too close to the ball.”

“Way to go Rebecca. That was beautiful. You’re a natural.”

“You’re too close to the ball again.”

“Move away from the ball.”

“You’re too close to the ball.”

And so, it went for an aggravating 10-minutes. Francisco suggested we up the ante and practice hitting the ball backward. The plan was for me to continue riding ahead but now I was to hit the ball back to Francisco, who would catch it and send it forward to me.

In order for me to hit the ball, I would look back to see when it would be coming. I had noticed that polo players look around a lot during games and the prospect of cantering while looking backward sounded cool.

The system of hitting the ball back and forth worked well. I wasn’t overly successful, mind you, but I was having fun.

Then, all of a sudden, things changed.

I looked back to see when the ball was coming and much to my surprise, Francisco was topless. T-shirt hanging around his neck like an infinity scarf.

It was 10 a.m. and though it was a warm California morning I wouldn’t have thought warm enough to disrobe. Nonetheless, there he was, with his torso, not yet glistening, exposed to the sun. His rippling muscles casting unexpected shadows that accentuated his physique.

My first thought was, what on earth. My second was oh my. And my third, which may be viewed as slightly jaded and bitter, pretend you don’t notice.

For the remainder of the lesson and the slow hack back to the barn, I operated under the pretence that Francisco was not topless, even though his six-pack was right there for the strumming.

I was curious to know why the shirt came off. Was it a way to garner a tip or was it done as an act of charity for the desperate housewife type? His motives were unclear, and I suppose he might have just been warm.

Despite his bravado or perhaps because of it, I had a great lesson. I learned bridles can stay on without a throatlatch, I can swing a polo mallet around from the back of a horse and some of the time, I can hit the ball. I also learned that despite my insecurity my confidence is never too far behind.

Francisco was kind, patient and loves his horses as much as the game of polo. And while my feminine wiles may have been lost through the ravages of time, my riding ability remains intact and has the power to level the playing field, at least in my mind. And for that, I will be forever thankful.

Feature image: This is what I had to pretend to ignore. I didn’t have the mental fortitude to ask for a selfie with Francisco after the lesson, so borrowed this photo of him taken by Ryan Polli. Empire Polo Club, Indio, California.