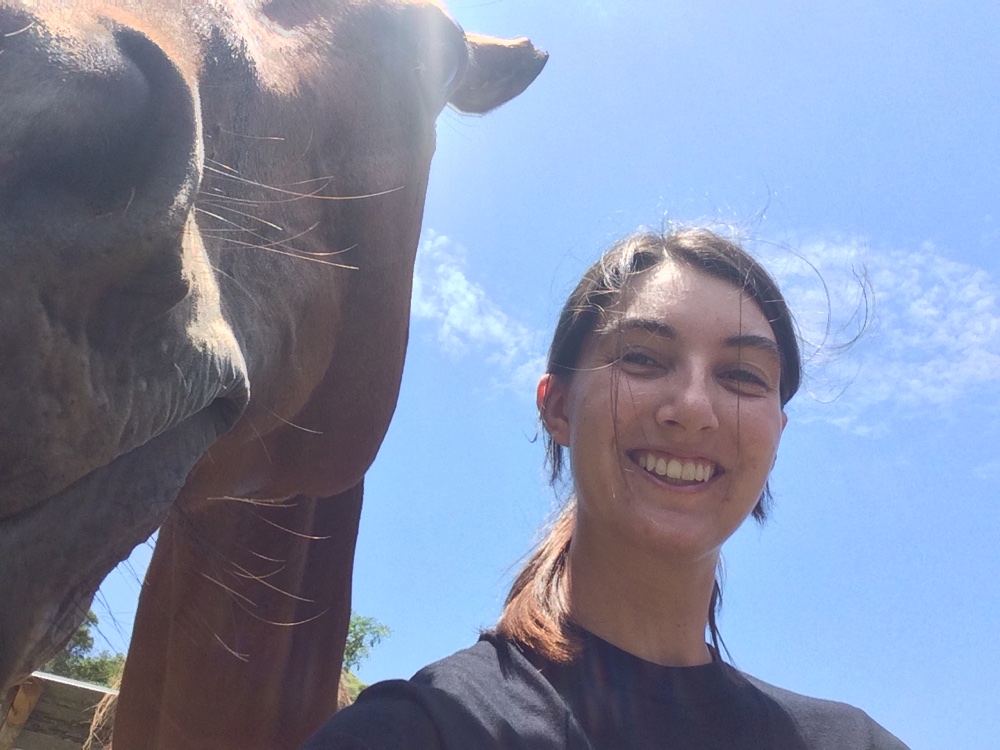 Tall, gangly, and inquisitive, Basil is one of the biggest characters I’ve ever met. Let me tell you about my weird horse friend.

I met Basil in Queensland, Australia. Several months into a year-long working holiday, I’d just accepted a job at a trail riding stable. The stables were located in the Daintree Rainforest and took riders from lush rainforest to tropical beach: a dream ride. The job also included accommodation, in a little shack about 100 feet from the stables.

It was a beautiful spot, but very remote. There was a small store selling basic groceries ten-minutes away. After that, the nearest town was an hour’s drive.

I was the only employee who lived on the property. My shack sat in the horse paddocks and backed onto rainforest; when night fell I’d hear mysterious rustling noises from the forest that I would later discover to be cane toads, bandicoots, and a resident goanna (a massive, metre-long lizard).

I spent the first night tossing and turning.

In the morning I saw that the horses, who had disappeared somewhere within their 300-acre paddock the night before, had reappeared. (I would quickly learn that the horses always returned to the stable by breakfast).

My heart settled a bit, hearing their familiar snuffling and teeth snatching at grass. But ahead of my first day of work, I was filled with doubt—it was so isolated. Was I really up for this level of adventure?

That’s when I met Basil.

Maybe he was curious about the noise coming from the months-long-abandoned shack. Or perhaps he’d smelled the oatmeal that I had bubbling on the camp stove. (That horse is possibly part bloodhound). Either way, Basil came to investigate and it was—as they say—the beginning of a beautiful friendship.

I scrounged up an apple to give him the first morning. He returned without fail every single morning of my time there, sometimes nickering at me impatiently the second I got out of bed.

On grocery trips to town, I soon took to buying Basil bags of carrots and apples. (There was no chance of him getting fat. A towering ex-racehorse and a hard keeper, I saw that horse suck back buckets of fatty coconut feed—both his and other horses’—and hardly ever put a pound on).

Even after the treats had disappeared for the day, he would continue to hang out with me, standing beside my front porch while I drank coffee or read.

My front porch had a built-in table overlooking the fields, where I ate all my meals and hung out when I wasn’t working. Basil did not seem to believe in the separation between my house and the horse paddock, and frequently stuck his nose over this table to demand attention. I cannot tell you how many times this horse knocked over my coffee (possibly he is part cat).

One morning, on a day off, I decided to sleep in. I heard horse hoofbeats walking around in close proximity to my house, but shrugged it off in a sleepy daze, assuming that whoever it was (Basil) would likely get tired of waiting for a morning carrot (Basil) and go away.

Instead, when I got up twenty minutes later, I found that Basil had squeezed through the human-sized gap that let into my patio area, rummaged through my garbage (possibly that horse is part raccoon), broke a concrete step, and then pooped all over the walkway on his way out.

And he was still waiting for his carrot!

My co-worker used to comment he was like an annoying younger brother, always hanging out, making a mess, and generally eliciting the refrain: “Baaas-illll!”

One day I was washing my sheets. In lieu of a clothesline, I figured that the round pen would serve as a great place to hang the sheets to dry.

Big, flappy, white cloths hanging over the normally stoic rails? Such terrifying ghosts would have sent the hunter-jumpers I used to ride five feet sideways.

But 30 seconds after hanging them, Basil came happily ambling over to investigate, green grass drool hanging off his mouth and ever-so-ready to stain.

I was forced to spend the next ten minutes distracting him. Luckily, Basil is vain creature and loves to take selfies (that horse is possibly part canary). When I was sufficiently satisfied that the sheets had been forgotten, I stepped away and he ambled off towards some more grass instead.

One of Basil’s weirdest quirks is his love of exploring things. Particularly dark, enclosed spaces.

We came in to work one morning to find that he’d broken into the parking shed. The shed shared a wall with our feed room. After busting through the gate, he wove himself in and out of several ATVs, following his nose, until he got himself wedged into a three-foot gap between an ATV and a wall stacked with spare tires. His body could wiggle, but his feet were stuck.

(Poor Basil, he was only eight feet away from grain buckets, which were clasped shut, but let’s be honest, I think we all know that he would have found a way).

Most horses in this situation would panic. But Basil, for whatever reason, does not have the instinct to try and run from danger (perhaps he is part skunk). His curiosity is thankfully blessed with a complementing quirk: that horse has patience.

He stayed wedged and waited for someone to come rescue him. When we got to work that morning, it took a minute to notice him; he was perfectly quiet. It wasn’t until I went to open the feed buckets that I noticed a very familiar face peering at me through a gap in the wall.

And, by the way, was his breakfast ready yet? He’d only had two carrots so far that morning, you know.

I have met a lot of horses, all with their own unique personalities. Basil might just take the cake. He certainly made my experience living in a shack by myself, in the middle of the rainforest, a joyous time.

After three months my visa was sadly running out and it was time for me to head home to Canada. One of the saddest goodbyes was to Basil, who seemed to understand exactly what I was saying. After permitting me one hug, he promptly scarfed down his apple and ambled off without a second glance.

The (human) co-workers that I’m in touch with assure me that Basil is happy, healthy, and kept in a good supply of carrots. My time there, in the end, was nowhere as lonely as I’d feared. I also made human friends, but mostly it proved impossible to be lonely when I had this horse constantly demanding treats, breaking into my yard, and hanging out with me.

Whoever gets to meet Basil next is one lucky camper.

And they should possibly be warned.