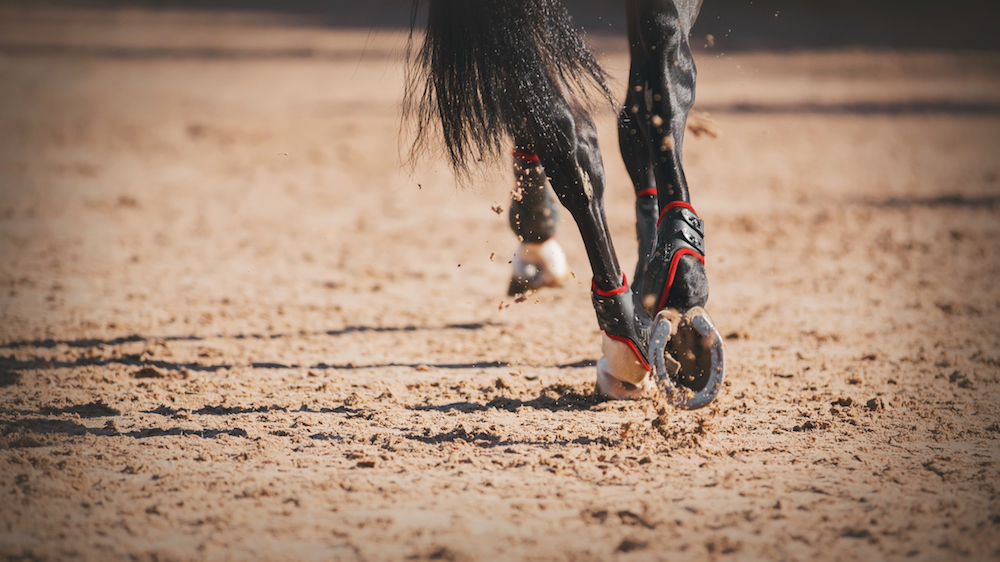 You have a performance horse.

He’s not performing as you had hoped or expected. His form is flawed. His piaffe lacks panache. His elan has elapsed. He slides have slid.

And half the people in the barn say…. (altogether now) “Maybe he needs his hocks done!”

Do you know which two of the horse’s body systems are responsible for the most performance problems? You’d probably guess number 1 right away, without any problems. If you said, “The musculoskeletal system,” you know, the joints, tendons, ligaments, muscles and such, you’re absolutely right.

But how about number two?

Number two is the horse’s respiratory system. And therein lies the reason for this article.

But first, a bit of background.

Without a doubt, the most commonly injected medications into horses’ joints are corticosteroids. They medications certainly do have their pluses and minuses (that’s a whole ‘nother article) but there are three facts about them that are relevant to this discussion:

That’s where this interesting study comes in. Early in 2020, researchers did a study looking at lung function in horses after they had their joints injected with triamcinolone, one of the most commonly used steroids that gets injected into horse joints. They compared the effects of giving triamcinolone in the joints with the effects of giving triamcinolone in the muscle, in horses that had severe equine asthma (formerly known as COPD, and before that, a couple of other acronyms).

Thus, the researchers took horses with equine asthma and they injected them with corticosteroids.

So, what did they find?

It turns out that no matter which way you gave the corticosteroids, the horses’ airway problems got better. They stayed better, too, for at least 28 days. And they stayed better even when the drug couldn’t be measured in the horse’s blood. These are potent drugs.

I find this not at all surprising, honestly, but really eye-opening. My personal opinion is that far too many folks jump right to injecting a horse’s joints when there is some sort of a performance problem, real or perceived.

I’m sure that many horses get better after having had their hocks injected, too. But given the doses of corticosteroids that some horses get, given that the drugs don’t stay in the joints, and given the wide-ranging effects of the drugs, I think it’s completely reasonable to think that sometimes—a lot of the times?—horses may be getting the right drug in a weird place for the wrong reasons.

I’ve written about the absurd practice of “joint maintenance.” Horses’ joints don’t need maintenance, but it’s entirely conceivable that some other problem is being helped by giving them large doses of corticosteroids.  Heck, at the doses given some horses, it’s entirely possible that they might just be getting a drug rush after a few joints have been “maintained.”

Imagine, fewer joint injections, lower doses of medication, and helping more horses. Why not check your horse’s airways if there’s a mysterious performance problem? Given that there are risks for joint injections (albeit, not huge risks, based on studies that have been done), and given that “joint maintenance” is a dopey idea in the first place, if your horse has a performance problem, you might want to consider looking at someplace(s) other than his joints. And you might want to keep in mind that you could be doing the right thing for the wrong reason.